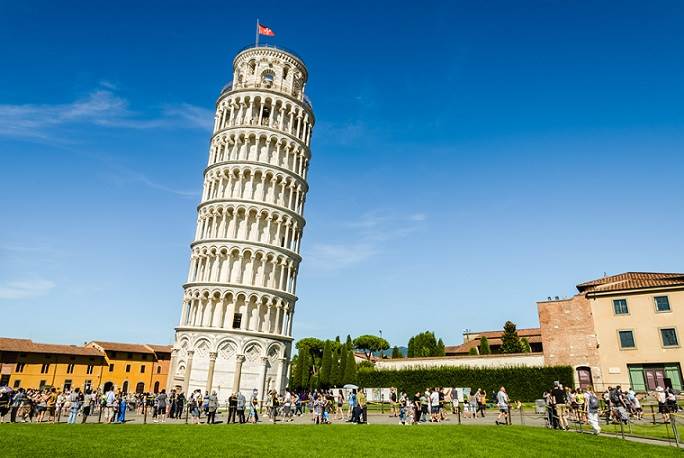 When people decide to visit Pisa, it’s no secret that they are after that iconic photo with the world famous leaning tower. Arguably one of the most recognisable structures in the world, the leaning tower of Pisa attracts visitors from all corners of the globe, while Pisa itself has landed on the map for being the gateway to beautiful Tuscany. Standing at an impressive 57 meters, engineers have long questioned how the structure has remained standing all this time. Here are 5 interesting facts you probably didn’t know about the leaning tower of Pisa:

It wasn’t built with the intention of leaning

Construction started back in 1173, with the building eventually finished around the mid 1300’s. As Pisa grew into an important Italian seaport, Pisans were put on the map, and after a successful attack on the island of Sicily in 1063, the proud Pisans started work on a cathedral complex in order to show the world their importance. A bell tower was to be part of this plan, which we know today as the Tower of Pisa. It was when the builders got to the third storey that they soon realised the foundations had destabilised. Thanks to the shifting soil underneath, the grand structure continued to shift for the next 800 years, falling at a rate of one to two millimetres every year.

Today, the tower remains part of the Piazza del Duomo Unesco World Heritage Site, which also includes the cathedral, baptistry and cemetery. If only they knew back then just how famous this mistake would be?

You can climb to the top

You might not want to, considering back in 1990 the tower was closed for the first time in 800 years over fears it would collapse. It had tilted at an alarming rate, and remained closed for the next 11 years until the structure corrected itself by over 17 inches. However, in 2008 monitors placed in the structure showed it had stopped moving completely….for now. So go for it, climb up for those views!

Considering the city itself is called the marshy land, you might think the builders had a thought or two before starting construction on a building that weighs around 14,500 tonnes.

Mussolini attempted to “straighten” the tower

Italian dictator, Benito Mussolini, decided that the tower was a blemish on his countries reputation. So in 1934 he set out to officially “fix” the tower. His men drilled hundreds of holes into the foundations and pump in cement, in an effort to rectify the lean. Unfortunately, the heaviness of the cement simply sank the tower further into the ground. This resulted in a more severe lean than they started with in the first place.

Doesn’t have the same ring to it does it? After all we are pretty sure there are plenty of straight towers in the world. The tower’s been straightened by almost 2 inches and is leaning less than it ever has before, according to reports. So if you’re looking to get in those cheesy but iconic photos get yourself to Italy ASAP!