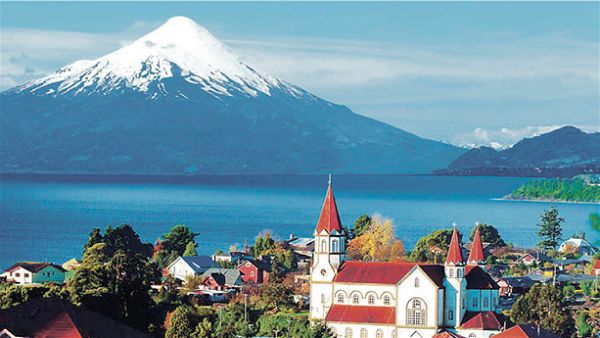 Puerto Montt, the capital city of Los Lagos Region is a frequent starting point for travelers venturing into southern Chile. South of this city, the coastal mountain range sinks into the ocean and creates thousands of small islands and inlets named the Austral Channels.

Located just over 1,000 km south of Santiago, Puerto Montt was founded in 1853 by Vicente Péres Rosales at its current location on Reloncavi Hill, a strategic location between Llanquihue Lake and the channel that separates it from the island of Chiloe.  It is an active port, in large part due to the productive salmon farming industry.  The city’s downtown area attracts visitors with a giant sculpture of two lovers which commemorates a popular song.  The city is also the starting point of numerous routes to the south in Aysén and Magallanes Regions.

Visitors should be sure to visit the Coastal Range and Pier. The Coastal Range stretches 6 km from the Peluco Area to the end of Angelmó’s, always along beautiful beaches and old fishing coves where many species of birds can be spotted.  Downtown, in the center of the city, sites include: various monuments remembering German colonialists, the country’s first train engine, a Chilote fishing boat, a sculpture named Sentados Frente al Mar (Sitting in Front of the Ocean), the train museum, and the region’s Juan Pablo II Museum.  The last museum chronicles the history of the town, including the 1960 earthquake, and the Pope’s visit in 1987.   The Pier is an excellent place for taking pictures in front of the Plaza de Armas, overlooking Tenglo Island and the port.

One arrives at Angelmó Market after walking for 20 minutes west of the Coastal Range.  This distance is less than 2 km.  Many people consider the market to embody the soul of the Region because it unites both food and art – two features that the city is well known for.  There are three main areas in the market.

The first part of the market showcases both local and international arts and crafts.  The second is only open for dinner and serves exquisite regional cuisine and wine served in teacups.  The third is the market itself, which sells a wide variety of seafood, including salmon.  Beyond the products available at the market, what stands out the most is its distinct and unique atmosphere.

The Cathedral, which was built in 1856, is constructed entirely from birch, with a copper copula.  It is inspired by the Greek Parthenon and located in the central plaza.  Due to its significance and central location, it is a popular place for various social activities.

Tenglo Island is located across a small canal before arriving to Angelmó.  Once in the island, a short 20 minute walk along a path brings visitors to the Cross of Tenglo, from which point there is an excellent view of Reloncaví, as well as, the Osorno, Calbuco, and Tronador volcanoes.  The island is also a place where native trees like Alerce, Mañío, Ulmo, and Ciruelillo grow.  While in the island, it is recommended to sample the curantos, meat, vegetables, and other local delicacies prepared on hot rocks and covered with leaves.  Also, barbequed lamb is a popular dish at Los Galpones de Tenglo Restaurant.

Pelluco Bay is the main local beach.  It is located 4 km east of the city and has the most active nightlife in the area.  The beach is known for its calm waters and soft waves.  A little known place to visit is the Punta Pelluco Nature Sanctuary where, once the tide is low, 111 birch tree stumps  dating back 50,000 years are revealed.

The Town of Calbuco is located 55 km southeast of Puerto Montt.  Since 1602, it has been a small fishing town full of local tradition.  Important sites include San Miguel Church and the La Vega fishing cove where several traditional restaurants are located.  Perhaps the most appealing part of the area is the 14 nearby islands which form the beginning of the country’s archipelago.  Passengers live a real adventure when they travel in boats and navigate these islands.  The town also hosts several popular annual festivals, including: The Night of the Lights, celebrated on September 28th; The Night of San Juan, celebrated on the 23rd of June; and the Indian Religious Festival, which is celebrated 40 days following Easter.

Andean Birch National Park is located 46 km east of Puerto Montt.  On its nearly 40,000 protected hectares of land, various native tree species thrive, including birch, tineos, mañíos, canelos, helechos, and lianas.  The park also contains over 50 small lakes nestled among the forests and mountains, particularly in the area south of the Chapo River and between the Seno and Reloncavi rivers.  In this area, a wide variety of bird species can be spotted.  Finally, hiking trails lead all the way to campsites at the foot of Calbuco Volcano.

Now, what are you waiting for? Travel to Puerto Montt right now!