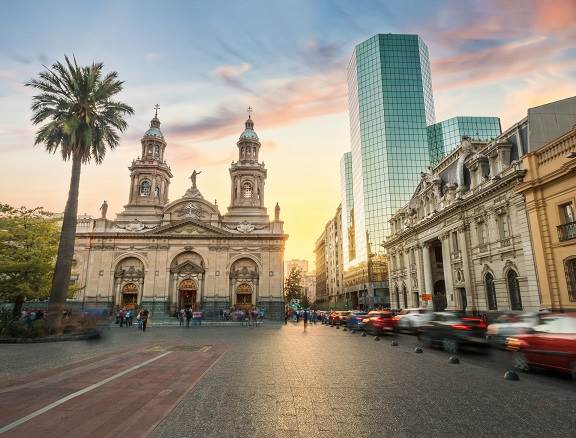 Santiago is divided into 26 different comunas, or districts, with 11 more lying outside the urban center but within the Metropolitan Region. Within these lie different barrios, or neighborhoods, each with its own character. Here, This is Chile profiles some of the most interesting.

Office workers and executives, tourists and old-time Santiaguinos, street preachers and chess players, shoe shiners and ice cream vendors – these are just some of the myriad personalities that cram the streets of Santiago’s downtown.

Home to some of Chile’s most historic buildings, the city center is also a vibrant commercial and residential center. It may not be Santiago’s cleanest or most picturesque neighborhood, but downtown is without a doubt the city’s beating, centuries-old heart.

The historic Plaza de Armas is the geographic and historic center of Santiago, the twin spires of the 18th-century cathedral looming over palms, caricaturists and old men hunched over chess tables. The National History Museum and the governmental center for the Municipality also fringe the largest open-air theater in Chile.

The majestic court building lies just west of the square, while Paseo Ahumada, which runs south from the Plaza’s southwestern corner, is a bustling hub for popular fast food joints, large department stores, and the ubiquitous outlets of café con piernas, or coffee with legs, a Santiago tradition where suited businessmen enjoy their coffee served by leggy waitresses in short skirts. (Those blacked out doors with heavy techno pumping from 10am onward are the more risqué version.)

Santiago’s Mercado Central sits on the northern fringe of the neighborhood along the Mapocho River, and houses the city’s primary seafood market, displaying the fruits of Chile’s 4,000-mile Pacific coastline for shoppers (and diners) from around the city. Nearby is the Estación Mapocho, recently converted from a railway station to a cultural center.

The Chilean Museum of Pre-Columbian Art, just east of the square on Merced, showcases the most comprehensive collection of pre-Hispanic art in the country. Toward the western edge of the neighborhood, Palacio La Moneda – the center for the government’s executive branch – stands majestic and whitewashed amidst the area’s institutional giants. Cultural exhibits are held at La Moneda Cultural Center, and each morning at 10 am, the Chilean police perform the changing of the guard.

Technically within the same administrative district as Santiago’s downtown, the twin barrios of Brasil and Yungay are cut off form the center’s high-rises and commercial activity by the Autopista Central, or Central Highway, which bisects the city center. The result is a neighborhood both frozen in time and at the vanguard of Santiago’s young bohemian community.

Developed for the wealthy in the 19th and 20th centuries, the neighborhood fell on rough times later in the century, but its beautiful mansions, built in a stunning diversity of styles, has survived it all, making this one of the most architecturally interesting parts of Chile’s capital.

Today, many of the old houses are being renovated and transformed into affordable apartments for the young people who have made the neighborhood their own in recent years. Bohemian Santiago makes its home in Plaza Brasil at the neighborhood’s center and Plaza Yungay to the west. Restaurants and bars sit shoulder to shoulder along Avenida Brasil, and the Galpón Victor Jara – one of the best places in Chile to see performances of traditional music – sits on Plaza Brazil’s southern edge.

The end of these barrios is marked by Avenida Matucana, which runs from the Central Bus Terminal in the south up to the Mapocho River, and is bordered to the west by the 96 acres of gardens that make up Quinta Normal Park. Within the park’s borders you will find the Natural History Museum and Artequín Museum, located in an enigmatic iron castle that was used for the Chilean pavilion in the 1889 World Fair in France. Currently undergoing a dramatic transformation, Matucana is now home to the Museum of Memory, which traces the history of Chile’s military regime, the Matucana 100 arts center, and the Santiago Library.

Wandering these barrios during the day offers a glimpse of a quieter, younger Santiago, looking to its history to explore the possibilities of its cultural future.

It’s only appropriate that a pair of neighborhoods centered around Santiago’s most venerable arts institution (the Museo Bellas Artes), and its newest (the Centro Cultural Gabriela Mistral), should also be home to many of Santiago’s fashionable young artists. Streets like Santo Domingo, Mosqueto, José Miguel de la Barra, Merced, Monjitas and José Victorino Lastarria are lined with cafes, designer boutiques and swish bars frequented by locals throughout the day.

Littered with wi-fi hotspots, the neighborhood is a common place to spot writers hunched over computers and painters taking a break from their daily exertions for a warming espresso or a well-chilled beer. On weekends, Lastarria turns into a street market of antiques and second-hand books, while the book stores that line Merced – though largely Spanish language – are any bibliophile’s dream.

The Cerro Santa Lucia, though not as well known for views as the Cerro San Cristobal across the river, is one of Santiago’s most attractive and unusual parks, and sets Barrio Lastarria apart from the city center.

Though some still know it as Santiago’s “bohemian neighborhood,” it has long since lost that title to Barrio Brazil. Instead, the neighborhood of Bellavista, squeezed between the Cerro San Cristobal to the north and the Mapocho River to the south, has become Santiago’s most prominent nightlife district, with bars, clubs and restaurants to suit any and every taste. Come here after 1am on a Friday or Saturday night to see Santiago’s nightlife at its most vivacious.

During the day, the area’s picturesque streets quiet down and close up, putting on an amazing display of street art. With its vibrantly adorned warehouses and lovingly restored mansions and manor houses, Bellavista is one of Santiago’s most charming and popular destinations, and home to La Chascona, one of Pablo Neruda’s three houses in Chile.

When you cross east over Loreto, just over the Mapocho from the Museo Bellas Artes, you pass from Bellavista to Patronato, and into an entirely different world of Santiago. Santiago’s lively immigrant neighborhood has little in the way of beautiful architecture, and is definitely scruffier than neiboring Bellavista and Bellas Artes, but it also challenges the common falsehood that Santiago is culturally homogenous.

North of Patronato in the neighborhood of Cerro Blanco, you can visit Santiago’s massive General Cemetery, where many of Chile’s most notable figures are buried amongst the lanes of grand mausoleums.

Ñuñoa
Ñuñoa lies in the south center of Santiago and cannot be reached directly by Metro. The easiest route to the area is to take Line 5 to Irarrázaval and from there board just about any bus heading east. It will take roughly 5-10 minutes to reach Plaza Ñuñoa.

This primarily middle class residential neighborhood, largely developed in the mid-20th century, is another of Santiago’s main nightlife centers. The collection of restaurants and bars that surrounded the neighborhood’s main square include La Batuta, which frequently hosts live music, El Dante, a great place for a casual beer, and La Tecla, often visited by actors, television figures, and movie directors.

Plaza Ñuñoa is also home to the Universidad Católica Theater. Three blocks away is the venerable Santiago Jazz Club, and a few blocks south of the square is the Ñuñoa Municipal Theater.

Though this massive district lies east of downtown, for many visitors and residents alike Providencia is the center of life in Santiago. Sprawled from east to west along Avenida Providencia, south past Avenida Santa Isabel, and north to the base of the Cerro San Cristobal, the district of Providencia offers a different face at each Metro stop and along each major avenue.

South of Baquedano – a major transit hub for the city center – Parque Bustamante is a quiet, café-lined haven that divides the city center from Providencia. Stately buildings and elegant parks surround Salvador Metro, while lively Manuel Montt is a great nightlife and shopping center, with Santiago institutions like restaurant Liguria and good vintage shopping options.

On the northern end of the avenue, a handful of (quite similar) bars and restaurants attract a young university crowd, while farther to the south, near Avenida Francisco Bilbao, the neighborhood becomes residential and is home to a handful of elegant restaurants. More restaurants and bars await near Pedro de Valdivia and Los Leones Metro stops, while Santa Isabel is quickly growing into another nightlife hotspot, with a handful of scruffier, quieter bars attracting a laid back crowd of artists and musicians.

Bookstores, clothing shops, and residential high rises line the district’s main avenue. The center of the city’s expatriate population, and the home to many of Santiago’s young professionals, Providencia lies between the traditional and artistic districts in the center and the up-scale suburbs to the east, and serves as a meeting place for Santiago’s disparate populations. You won’t find many specific sights here, but you won’t have seen Santiago without at least coming here for a drink.

Las Condes, El Golf, Vitacura
Metros: Line 1: Tobalaba, El Golf, Alcantará, Escuela Militar (access to Vitacura is easiest via buses 502 and 405. Alternatively, take the Metro to Tobalaba and a short taxi from there.)

Referred to by some (with a wink, a nod, and a heavy dose of irony) as Sanhattan, these areas to the east of Providencia are a collection of modern high rises, among them the ongoing Constanera Center, which will be the tallest building in South America when it reaches completion. The center of Santiago’s business district, these districts are also home to many of the city’s boutiques, galleries, and high-end dining locations.

Isidora Goyenechea is the street at the center of El Golf, home to some of the area’s swish hotels and poshest restaurants. Alonso de Córdova in Las Condes has a quieter, more suburban feel and is crammed some of Santiago’s best shopping destinations, from international designers like Louis Vouitton to well-regarded local designers. The galleries that line the road, including Patricia Ready, Animal, Isabel Aninat, and AMS Marlborough, are among Santiago’s best.

Vitacura’s Avenida Nueva Costanera is the hub of Santiago’s ever-expanding fine dining scene with many of the city’s most fashionable and cutting edge restaurants occupying the pretty 20th century houses along this broad, shady street.