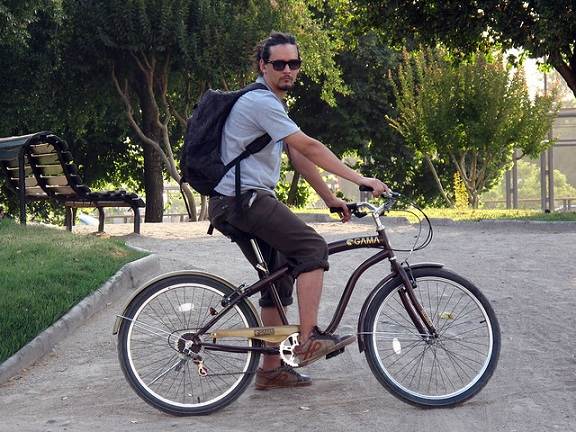 Since the turn of the millennium, bicycles have been growing in popularity around the world. Santiago is no different and has focused itself on a $398 million USD plan to install more than 700 km of bike paths around the city, resulting in more than 950 total kilometers running through the city by 2032. Most of these paths will be concentrated in Estación Central, Santiago Centro, and Providencia. Even as several new bike lanes pop up throughout the city, the rising popularity of this mode of transportation means the bike lane network is becoming nearly as congested as the streets. However, this shouldn’t be discouraging since it’s more environmentally friendly, good exercise, and sometimes even faster than the metro or bus. We at Revolver love our bicycles, and understand the fear one might have trying to get out there for the first time. Here are some common anxieties that come with riding a bike in this chaotic city and answers that (hopefully) calm them:

1. “I can’t ride a bike in this traffic; have you seen they way they drive?!”

In the past year or two, Santiago has seen a boom in bike paths across the city from Las Condes to Maipú. It’s pretty easy to get most places in any part of the city by bike path, and traffic is not that intimidating when using side streets. There are some busy places where it might be recommended to use the sidewalk while making your way between bike paths, like in front of Telefonica Tower, for example. When doing this, remember that it is actually illegal to ride your bike on the sidewalk (although this rule is not enforced, so don’t be afraid), and give pedestrians the right of way. Riding on bike paths has similar rules to driving: stay to the right, obey traffic signals, and give arm signals. To signal a turn to the right, outstretch the right arm. Outstretch the left arm for a left turn, and point the left arm down to signal a stop or slow down. Don’t try to pass someone if there isn’t enough space or there are oncoming cyclists, and be aware of others that are around.

A bicycle, helmet, and lock are pretty easy to find. People are always selling used bikes and related gear in several Facebook groups, or for a wide variety of shiny new ones, walk down San Diego between Santa Isabel and Matta. This is the street with all things bicycle, from basic to baller, whether you want a street, mountain or specialized bike. There you can also find helmets, locks, gloves, and repair equipment. Make sure to get a good helmet (it’s illegal and frankly, unsafe not to wear one), and a U-lock is recommended over a chain because it’s not as easy to compromise the U-lock. Lights are also necessary, especially for riding at night, and many people sell them along the side of bike paths and at metros.

3. “I might be interested in some occasional bike riding, but without a full commitment to buying and maintaining a bicycle.”

BikeSantiago.cl (those orange Itaú bikes all over the place) has expanded immensely in the past couple of years, with bike racks throughout the city, concentrated in Centro, Providencia, and Vitacura. Basic level members pay about CP $6,000 which includes up to 30 minutes of bike rental per day. Black level members pay about CP $10,000 per month, which includes 60 minutes of bike rental per day and 120 minutes on Sundays. With both plans, members pay a low fee for extra rental time. This is a great option without the commitment of actually buying and maintaining a bicycle. You’ll still need to invest in a helmet, as they aren’t included when you check out a bike.

Nearly every barrio has at least one bicycle repair shop, although some areas are more pricey than others. There are several reasonably priced repair shops and bike stores concentrated along Santa Isabel and in Barrio Italia. Cheap repairs can also be found in the various marketplaces around the city, like the one by Parque de los Reyes or around La Vega. CeltaSOS will come to you, wherever a problem might arise.

Ciclovías blanket the city, and comunas like Centro, Providencia, Vitacura, Las Condes, and Ñuñoa are even more concentrated than other parts of the city. Some comunas, like Macul, are totally dry, but tons of side streets provide a comfortable riding space. Check out Bicimapas.cl to map a specific route to anywhere in the city you want to go, as well as mapped bicycle stores and repair/maintenance shops. Once you get there, most parking garages features a bike rack where you can lock your bike, but there are also an abundance of bike racks and sign poles where you can lock up.

6. “Are there any cycling actives or cycling groups in the city where I can meet other cyclists?”

The first Tuesday of every month, cyclists from around the city join together at Plaza Italia for a Cicletada through the city. The ride promotes awareness of bicycle safety on the streets and a sense of camaraderie among cyclists themselves. Give Movimiento Furiosos Ciclistas a like on Facebook. This non-profit promotes bike safety and awareness. Several other groups do rides throughout the year, such as Bicipaseos Patromoniales which visits different patrimonial sites. CicloRecreoVia closes streets on Sundays, specifically for bikers to get out and do their thing. Plenty of bikers haul up Cerro San Cristobal on the weekends, and other mountain biking paths are emerging and becoming popular. The Revolver Weekend Agenda also features many of these activities.