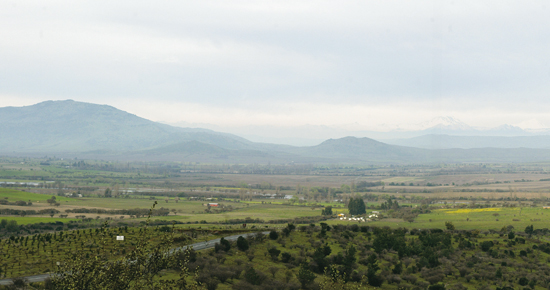 Everything is close to the capital of the Maule Region. Natural environments, rural culture and illustrious mountains like Descabezado Grande.

Talca, Paris and London, Chileans tend to say. What does the capital of the Maule region have to do with these major European cities? According to the legend, the expression has its origin in a hatter’s shop that set itself up in the city a century ago.

Founded in 1692, it preserves traditional customs with zeal and pride. The city’s downtown has buildings that recall its colonial and rural past, impossible to erase by the modernity that has come to stay. Talca is infused with an air of peace that is typical of rural areas.

Located 258 km south of Santiago, this city is a faithful reflection of the Chilean countryside. It is in one of the main agricultural production regions in the country and offers popular traditional cuisine. Take note of the menu: charquicán, cazuela, and chancho en piedra, with a few safe bets: las Viejas Cochinas, the traditional market cookeries, or the Fuente Germana, a specialist in sandwiches.

Plaza de Armas
The modern and classic worlds meet in the square: an area with Wi-Fi, the Cathedral’s restored architecture, centuries-old trees from the coastal mountain range. A beautiful old bandstand comes to one’s attention at one end of the square. Talca residents are in the habit of taking walks here to see and be seen, a tradition that has existed for decades.

O’Higgins Museum
This colonial house is particularly famous and appreciated. Three fundamental events in the history of Bernardo O’Higgins took place here: he lived here for part of his childhood; then, in 1813, he took over as Army General in Chief, and, ultimately, it was here that he signed the declaration of National Independence. The museum currently holds nine heritage collections, which contain over 2,000 objects that illustrate the artistic and historic past of both the Maule Region as well as the country. 1 Norte #875, Talca. Phone: (71) 210428.

Huilquilemu Cultural Village
This is a series of buildings built in the 19th century that have been declared a National Monument and depend on the Maule Catholic University. A Museum House has operated there since 1974, dedicated to the development of regional and national arts and culture. It is currently an active cultural center with a wine cellar, a religious art museum, a lot with antique machinery and an excellent restaurant. It is part of the Maule Region wine route and is located 7 km from Talca on the road to San Clemente.

Cerro De la Virgen
The path to this lookout point starts on the other side of the bridge over the Claro River. From there you get a panoramic view of the city of Talca. The name is owed to the image of the virgin that is located on the summit. It is also a good place to have a picnic.

Curicó
This is the second most important city in the Maule Region, only 66 km north of Talca. It is famous for its cakes, puff pastries, and dulce de leche, in addition to the Curicó Wine Route, which includes 16 vineyards.

The metropolitan area of the city stands out above all for its Traditional District, which includes the Plaza de Armas and a beautiful two-level bandstand together with 60 Canary Island palm trees planted at the beginning of the 20th century.

The San Francisco Church, declared a Historic Monument and located at the foot of Cerro Condell, is also a place of interest for visitors. Its exposed brick construction dates back to the 18th century and its lancet arches and slender tower come to one’s attention. Inside it holds the image of the Virgin de la Velilla, brought to Chile by Manuel Díaz Fernández.

Villa Alegre
Also declared a Traditional District because of the care that its residents pay to the preservation of the town’s architectural uniqueness. The houses have external corridors, are aligned in a continuous construction, and are adorned with orange groves. Its attractions include its tempting chichas and parish church, which is a Historic Monument, in addition to the history museum that holds manuscripts by the poetess Gabriela Mistral. It is located 32 km south of Talca.

Maule Hot Springs
A trip to the hot springs will also take you to traditional handicrafts, health tourism, and an incomparable mountain landscape. The hot springs of Quinamavida, Panimavida, and Baños de la Monja combine the warmth of the people, the traditional dishes of the area, horsehair handicraft from Rari, tapestries, and leather goods. The route includes the sectors of Colbún Alto, Longaví, El Melado, Rabones, Achibueno, and Ancoa, where the town folk offer visitors horseback riding and a warm reception.

Putú Dunes
Located 114 km west of Talca, this is a unique place in the region and ideal for photography. It is located north of the Maule River and covers the area between the Junquillar sector, which is of priority interest because of its biodiversity, and the mouth of the Hunchullami River. The dunes extend for 9 km at their widest point, near the village of Putú. This is one of the largest dune fields in the country, with an appearance similar to the Sahara Desert.