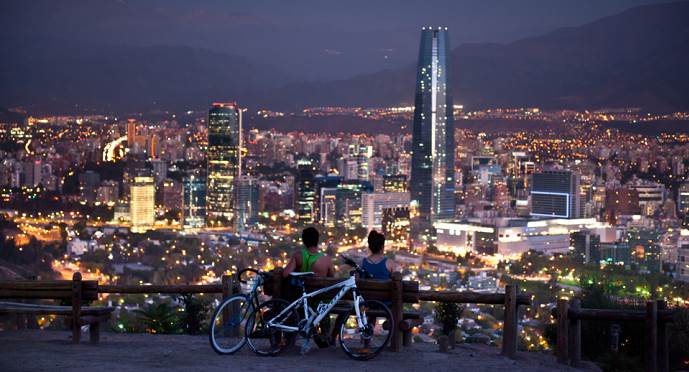 Chile’s diverse geography has given Santiago different points that provide locals and tourists with great views of the city. However, new buildings and developments in technology have allowed the offer of views of Santiago to increase. Here we show you some of the capital’s new viewpoints as well as others that are now considered as classics.

Even though the last stop of the cable car of the Metropolitan Park in Santiago is the summit of the San Cristóbal Hill, the location of the most common photographs of Santiago from above, its 2 km trajectory divided in 3 stops provides users with other, less common views of the city. Although the cable car of the Metropolitan Park was originally opened in April, 1980, in 2009 it suspended its operation, reopening only in November, 2016. The reopening introduced 46 new cabins with a capacity for 6 people each (in contrast to the old cabins -popularly known- as “little eggs”- that could only carry 4 passengers). Of these new cabins, 8 were exclusively designed to carry bikes in them.

Three years after the opening of the shopping complex Costanera Center, the viewpoint Sky Costanera was opened in August 2015, being the tallest in all of South America. Located in the 61st and 62nd floor of the Gran Torre Santiago, the viewpoint offers 360° views of Santiago from a height of 300 meters. Besides offering privileged views of the city, Sky Costanera also offers educational visits in which issues of history, geography, architecture and urbanism are reviewed.

When Giratorio restaurant opened in the Providencia commune of Santiago in 1981, it was considered a novelty. Located in the 18th floor of a building, the restaurant spins in 360°, offering incomparable views of Santiago. Even though Santiago has grown and new taller buildings have been erected, the experience of having lunch or dining while the city spreads in all its glory continues to attract locals and tourists.

Although the Santa Lucía hill is one of the smallest in Santiago, with a height that only reaches 69 meters, it is without a doubt a classic when it comes to get great views of the city as well as to get a sense of its history. It was there that Pedro de Valdivia “founded” Santiago del Nuevo Extremo in 1541. Moreover, during the period of reconquest, the hill acquired an important role for the defense of the country. Two forts were built at the time, in addition to the Hidalgo Castle that also served defense purposes; the forts and the castle still stand at the top of the hill. Its views and its history make of Santa Lucía Hill a point of great tourist attraction.