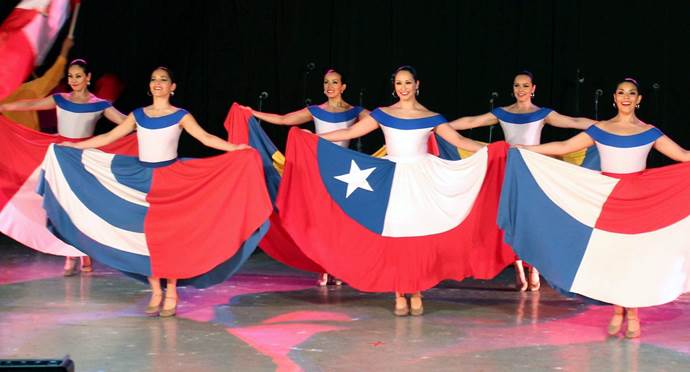 If art is the expression of a people’s culture, ritual movements and dancing set that culture in motion. Like all other peoples, Chileans manifest their character; they celebrate ancestral rituals, and revel through popular and folk dancing. In the north they celebrate the Fiesta de La Tirana; in the south it may be the nguillatún, a Mapuche ritual; on Easter Island it will be the sau sau, their popular dance song, and throughout the country, the national dance called la cueca, in which a couple wave handkerchiefs in the air and represent the romantic playfulness of courting.

These are all typical dances linked to folk traditions, religious rituals or national feast days.

The Ballet Folklore Nacional or Bafona (Chilean National Dance Troupe) preserves and makes known the folk dances of Chile with more academic emphasis on authenticity, as well as to entertain their audiences.

Typical dances from north to south

In northern Chile, traditional dances show the influence of the Quechua and Aymara cultures. Dance is the expression of popular piety and is part of the pagan festivals inherited from the Incas. A manifestation of syncretism with Catholic culture is the diablada of the Fiesta de la Tirana. This is the dance of religious brotherhoods in which some dancers wear demonic masks, while their accompanying musicians, attired in colorful costumes, play percussion and wind instruments. Other northern Chile dances, though without religious connotations, are the trote, cachimbo, and the cueca nortina.

In Chile’s central zone, the queen of the ball is the cueca, danced and sung especially during the national independence celebrations. In Santiago and Valparaiso the predominating forms are the peasant style, ballroom style and also the cueca brava (“fierce cueca”). The basic courtship choreography varies in style from elegant and delicate to what is apparent harassment. Another courtship dance is the sombrerito, in which the woman holds a hat aloft instead of a handkerchief and approaches or moves away from her partner, mixing slow steps with quick, staccato ones. At the end of this courtship dance, the couple hide their faces behind the hat and simulate a kiss.

In the south, Mapuche dance is a ritual of worship rendered to the divinity and a healing ceremony as well. In the nguillatún and the machitún, prayers are offered to the supreme god Ngenechen and to the rehue or canelo tree (Drimys winteri), sacred to this culture. There is also the loncomeo, which means “to move the head.” It is a dance that imitates the movements of animals around the fire in the central hearth, or fogón. The presence of the machi, the shamanness of the Mapuches, is fundamental in these ritual dances, as she is the sole intermediary between mortals and the spirit world. A special occasion for feasting and dancing is, of course, the new year of the Mapuches, We Tripantu.

A little farther south, the climate influences the traditional dances. Among fishermen and farmers, the steps and choreographies are livelier, as though to shake away the cold. In the trastasera the man moves his arms, inviting the woman, who takes a corner of her skirt in her hand, to make una media vuelta or a half turn until she faces him. In the costillar two men compete, dancing around a bottle placed in the middle of the dance floor, and the one who kicks the bottle over loses.

Other couple dances are the vals chilote, in which the woman and the man increasingly intensify the forcefulness of their steps; the sirilla, which originated in the Spanish dance called the seguidilla, and the zamba refalosa, a typical dance from the island of Achao.

The typical dances of Easter Island are Polynesian in origin. The sau sau and tamuré are dedicated to the gods, to love and nature. The sau sau is characterized by the sensuousness of the dancers’ waist and hip movements, the undulations of their arms and hands, and the garlands of flowers, blowing in the breeze, worn by the men and women. The tamuré is a fertility dance, performed by couples with sinuous and rapid pelvic and leg movements.

The Chiloé Island dance sirilla has Spanish influences, while the tamuré of Easter Island is of Tahitian origin, and many other typical Chilean dances trace their original influences from other lands and cultures as well. The refalosa originated in Peru, the cuando from Spain, the rhythms of the peasant dance guaracha are the legacy of Colombian and Cuban dance, the polka came from Central Europe, and the corrido is typically Mexican.

In the 1940s, the University of Chile formed a stable cast for the National Ballet Company and brought over outstanding European ballet masters Ernst Uthoff, Lola Botka and Rudolf Pescht, who would train the precursors of modern dance in Chile, such as Patricio Bunster, Joan Turner and Malucha Solari. Joan Turner, who was born in England, later married musician and theater director Victor Jara and was granted Chilean citizenship in recognition of her valuable contributions to culture. In the 1960s and especially during the government of Salvador Allende, the massification of dance was promoted and the Popular Ballet (Ballet Popular) was formed.