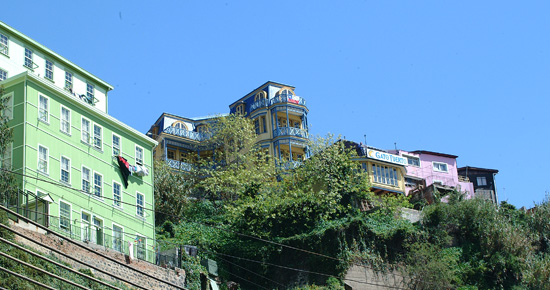 Hills: Without doubt, these are Valparaiso’s main attraction. You can find everything there, from the Dissidents’ Cemetery to a prison turned into a cultural center. There are high-priced boutique hotels and also dive bars. There are over 40 hills, among which Bellavista, Concepción, Cordillera, Polanco, and Barón are the best known.

You can reach the hills via enormous stairways or by taking one of the 15 antique elevators on the Plain. There are beautiful walks to be taken that combine heritage architecture with grand lookout points, with Paseo Yugoslavo in Cerro Alegre, Paseo Gervasoni and Paseo Atkinson on Cerro Concepción standing out. There are no other secrets: you just have to get lost in the streets of the hills and allow yourself to be surprised and accept the enchantment.

Heritage Elevators:  Built over a century ago, the elevators are an everyday means of transportation and at the same time afford a sweeping view of the bay. The common characteristic is that they go up and down under the open sky, except for the Polanco elevator, and operate with almost original engines and gears.

Playa Ancha: This is one of the traditional hills and the people born there declare themselves the residents of an independent republic. Playa Ancha has a different identity from the rest of Valparaiso. Located at the far south end of the port, its attractions include the Torpederas beach, interesting early 20th century chalets and the Municipal Stadium where the mythical soccer club Wanderers, the passion of port residents, plays. In addition, this hill is home to several university campuses. A complete tour should consider a visit to the Roma bar, a symbol of the local university bohemian scene.

Plaza Sotomayor and the Port: In the center of this square is a monument to the hero of the Battle of Iquique, Arturo Prat, while around it the activities of the Navy and the port take place. It is an atmosphere where you can see anything from night owls still partying at sunrise, to dozens of tourists heading for the dock, where transatlantic cruise and cargo ships arrive, so they can take a boat tour of the bay. Heritage buildings surround the Prat monument, which was inaugurated in 1885.

The most remarkable one is perhaps the old Intendance, which currently houses the First Naval Zone command. Over a hundred years old, it is an obligatory snapshot, as is a visit to the handicraft fair on the Prat pier and listening to the colorful and funny comments by the stall owners.

Open-Air Museum: This is a display of enormous murals by renowned national artists, mixed with sights of Valparaiso’s houses and magnificent panoramic views. In Cerro Concepción, a few meters from the Plaza de la Victoria, the steep staircases allow you to observe paintings by Nemesio Antúnez, Mario Toral and Roberto Matta, among others.