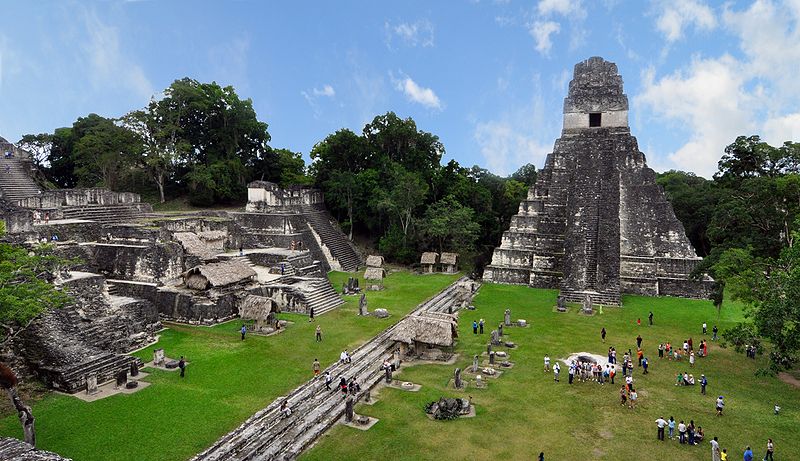 A top highlight of any adventure tour in Central America is wandering through the enigmatic and ancient Mayan ruin sites that are scattered throughout Mexico, Belize, Guatemala and Honduras, and usually deep in a steamy jungle setting.

Many of the sites are still in excellent condition despite being over a thousand years old, and offer some of the finest archaeological palaces, observatories, temple-pyramids and ceremonial sites on offer anywhere in the world.

A Mesoamerican civilisation, the Maya is noted for having the only known, fully developed written language of the pre-Columbian Americas, as well as for its art, architecture, and comparatively advanced mathematical and astronomical systems.

Mayan cities changed and developed over the centuries and not all were of the same size and style, which makes visiting a variety of them a must.

The incredible jungle site of Tikal was regarded as the greatest city of the Mayan world and is one of the biggest Mayan sites ever discovered. Today the main centre covers an area of around two square kilometres, but at its height the city stretched for nearly 100 kilometres. Entwined in thick jungle, the site consists of almost 3,000 buildings including palaces, temples, platforms, ball courts, steam baths and five impressively tall temples which rise up above the jungle canopy. The highest, a massive 70 metres, is the Temple of the Double Headed Serpent (Temple IV). Tikal is also rich in animal life, with howler monkeys, parrots, toucans and scarlet macaws providing an equally impressive soundtrack to the ruins you uncover as you go about.

Built between 600 and 900 AD, Chichén Itzá is probably Central America’s most famous Mayan city. Surrounded by scrub forest, the five-square-kilometre city is said to have been inhabited for more than 2,000 years and, at its peak, was the centre of political, religious and military power in the Yucatán peninsula. Meaning ‘mouth of the well of the water sorcerer’, Chichén Itzá has strong Toltec influences and consists of many pyramids, temples, ball courts and palaces all adorned by fascinating sculptures. The Castillo dominates the site, a giant step pyramid built with such precision that during the spring and autumn equinoxes shadows form the astonishing illusion of a serpent descending the steps.

One of the premiere Mayan ruins in Central America and dramatically situated at the foot of the Chiapas highlands in Mexico, the Mayan ruins of Palenque are widely regarded as the most atmospheric and impressive of Mexico’s Mayan ruins. The site features the Temple of Inscriptions containing Pakal’s tomb, the Palace and other pyramids and major temples with wonderful examples of Maya art and history carved into building facades.

One thing common to all the sites is the weather; it is annually hot and sunny so you will want to come prepared with plenty of water and loose-fitted clothing to best enjoy your time exploring these fascinating ruins.