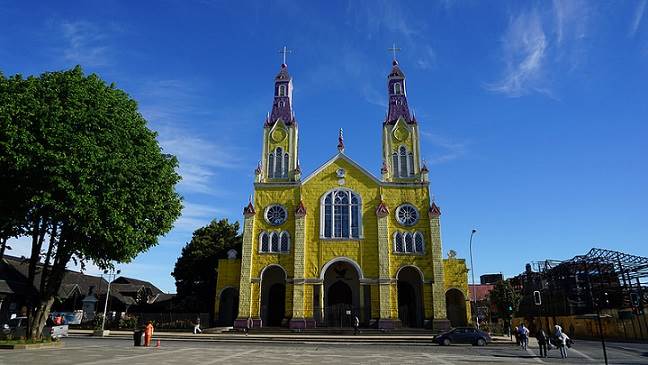 The Island’s name comes from the word “Chilhué”, which means “seagulls place”. Inhabited at the beginning by Cuncos, Huilliches and Chonos (all, native tribes), the Island was discovered by the Spaniards on November 8th, 1553. It got its independence in 1926. That same year the Province of Chiloé was created, incorporated to the Chilean Republic and given to the city of Castro the status of capital.

Also during the 16th Century the first religious missionaries arrived, Franciscans and members of the order of Our Lady of Mercy. They dedicated themselves to people’s Evangelization. But it would be the Jesuits, who arrived in 1608, the ones to organize the Evangelization system that gave this area its distinctive hallmark. A system that was later continued by the Franciscans after the Jesuits expulsion in 1767.

What the Jesuits applied was a circular mission, in which groups of missionaries would make annual travels through the archipelago, staying for a couple of days in certain zones, where they would build chapels. Lacking a priest, it would be a layman who would work in it for a whole year. In the beginning, he was called “attorney” or “amomaricamañ” and was specially prepared to spiritually help those in the surrounding areas. The work of this deacon allowed the syncretism of the indigenous and catholic religious worlds, giving it a strong local content, without damaging Christianity’s essence. During the 17th and 18th Centuries, the Chiloé churches were founded, out of nature’s resources, the skillful hand of the Indians and the teachings of the Jesuits. They endured south’s hard weather. Now, they have become the proof of a rich intercultural dialogue and a deep crossbreeding. Currently, in Chiloé there are sixty Churches that belong to the typology called Chilota School of Religious Architecture on Wood.

As a general rule, the temples from this School are located close to the coast. But for most of them, there was kept a mountainous shelter from the north, making them face south as a protection from the rain.

The Churches are made out of a big hermetic volume of horizontal proportions, usually sustained on foundation stones. A vertical body, the tower, assembles the front that faces the visitor, and is the characteristical element of all these constructions. The tower, always symmetrical, has an entrance-portico and a pediment. It constitutes the construction’s essential trace, not only because of its symbolic importance -it is the base for the cross and the bells- but also because sailors can see it from afar, like a guiding light.

In the interior, the space is distributed on a basilica floor and three naves, from which only the central reaches the back wall. The two side-naves end on a partition that becomes the sacristy and the room where the liturgical objects are kept. Wooden columns, erected over stone, separate the naves.

With the passing of time, the larch, coihue and cypress with which these Churches were built absorbed humidity, acquiring a dark and grayish color. In its interior they received people’s steps and uncountable candles. Outside, the community organized pilgrimages, with men and women on specific jobs: the dressing and transportation of religious images, the cooking and the singing. All, part of a rich cultural tradition, without which these temples would just be old wood.

This is the immeasurable value of the Chiloé churches. They are part of our cultural heritage on a tangible and intangible dimension. A capital which is unique and unrepeatable and that explains the naming of sixteen of these Churches as part of Mankind’s Heritage by the United Nations Organization for the Education, Science and Culture (UNESCO).