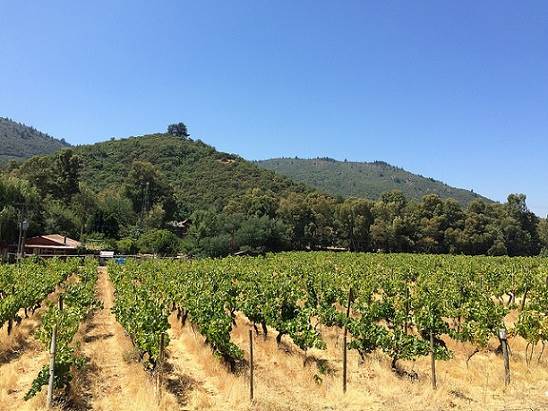 The effort for making tourism benefit of Chilean wine´s quality and prestige has made for wineries to organize themselves together and create routes where visitors can appreciate wine´s varieties, its elaboration, vines and cellars. One can also enjoy the zone´s typical gastronomy, handcraft and nature.

The agreement among wine producers on the need of creating a wine route, has meant a real commitment for showing tourists all the premises, processes and products related to wine in the best possible way. In the case of the Colchagua Valley, its recent awards have helped to place the zone at the highest world standards. But it has also contributed the quality of tourist services, in which the whole community has worked on developing a high-level cultural and gastronomical tourism. Its best expression is the project of the “wine-train”, which will go from San Fernando to Santa Cruz all through nearby wineries, offering typical handcraft and food at every station.

There are nine wineries included in the route -in which one can know the rural and industrial environments, and even the history and traditions of all those noble families that settled there during the Colony. Among the most important wineries there are Santa Laura and Laura Harling, a boutique-winery specialized on reserve products and small-scale production. With 197,6 acres, it has a production capacity of 120 mil liters. One can see its stainless steel tanks, and visit the cellars made out of evergreen oak.

The Viña Bisquertt is one of the oldest. It is located in a beautiful colonial house of robust construction and beautiful gardens, and exhibits different technologies used in wine´s industrial processes through the years. It has its own label since 1991, covers 988 acres and has an annual production of 3 million liters. One can find there ancient trees, stainless steel tanks -and even some made out of cement-, along with an important collection of cars, carriages, machinery and vintage tools for the elaboration of wine.

Other wineries in the circuit are Viña La Posada, located within the city of Santa Cruz -since 1985, it now produces 1 million liters per year-; Viña Pueblo Antiguo, founded in 1978 and dedicated to the production and exportation of wine. It covers 148 acres and presents an annual production of more than 1,100.000 liters. Mont Grass is a winery with up-to-date technology, founded in 1993 (annual production: 1,4 million liters), Viu Manent comes from the middle of the 19th Century but elaborates its own wine since 1990 (annual production: 1,4 million liters) and there are also Casa L´Apostolle, Casa Silva, Luis Felipe Edwards and Siegel-El Crucero.

In one day, one can perfectly visit as much as six wineries, thanks to an organized tour that shows the zone´s typical aspects (gastronomy, handcraft, costumes and, obviously, its great wines). The guided tour starts from Santa Cruz´ Plaza de Armas, and includes a visit to the wineries -and wine-tasting, of course-, the Colchagua Museum, and an exhibit of local handcraft, plus lunch at the Santa Cruz Social Club. Some tours include fewer activities, and excursions to other country locations. The office of the Colchagua Wine Route is at Plaza De Armas #41, Santa Cruz. (56-72) 823 199.

Fresh start
The recently inaugurated Wine Route in the Curico Valley integrates the wineries Aresti, Alta Cima, Astaburuaga, Correa Albano, Echeverría, Inés Escobar, La Fortuna, Miguel Torres, Osvaldo Astaburuaga, Piarzzoli, Río Claro, San Pedro, San Rafael, Valdivieso y Bodegas, and Viñedos Dussaillant. The idea was born in 2002, thanks to an associative project of CORFO. 16 wineries, all with the support of the Chilean Wine Corporation, started with this initiative which looks to promote not just the local viticulture quality, but also other elements that surround wine.
“The route looks for the promotion of wines that have existed for a long time at the region, with a large tradition, touristic appeal and a history which is both fun and interesting, like gastronomy, history, culture and art”, says its director, Roberto Echeverria. The challenge is given now by the consolidation of the Route in the international scenery, the same as with the Colchagua route. Once can visit wineries, cellar and patronal houses with wine-tasting and dinner at the winery, all taking part in the grape harvest, related to nature and country traditions.

The journey starts off from the office of the Curico Valleys Wine Route, located at Curico´s Plaza de Armas (also known as Plaza de las Palmeras). There, one finds an exhibit of the valley´s best wines (reservations can be made to winetourscurico@entelchile.net, phone #56-75-328 972). There is also information about excursions to the mountains, horseback riding, thermal baths and waterfalls -as beautiful as that of Velo de la Novia and Siete Tazas (this last being internationally recognized for its kayak possibilities). The Vichuquen lake is ideal for the practice of sea sports. At the Museum, one learns about local Indian traditions, and can find houses built during the Independence and Colonnial periods. Also, there are the beaches, fish and seafood of Iloca and Duao. The route of the Maule Valley is the second to be created in Chile. It goes from San Javier (350 miles south of Santiago) to Villa Alegre, and one can taste all types of wine, from the most rustic to the most sophisticated. It is a land full of folklore, tradition and, obviously, musts. Journeys organized by the wine companies and the City of San Javier include 23 wineries, among them Santa Beatriz, Gabriel Court, Santa Berta, San Clemente, Balduzzi, Cremaschi, El Aromo, Hugo Casanova, Carta Vieja, Domaine Oriental and J. Bouchon.
At San Felipe, one finds a route that includes the wineries of Sanchez de Loria, Errázuriz, Almendral, San Esteban and Monasterio. Other viticulture valleys of Chile -with less of organized tours, though open to public- are the Aconcagua Valley (Viña Errázuriz), the Casablanca Valley (Casas del Bosque, Veramonte y Villard, and Valles del Maipo) and Rapel (Aquitania, Carmen, Concha y Toro, Cousiño-Macul, Doña Javiera, Santa Mónica, Haras de Pirque, Quebrada de Macul,William Fevré, Santa Rita, Tarapacá, Undurraga, La Rosa and Santa Inés).