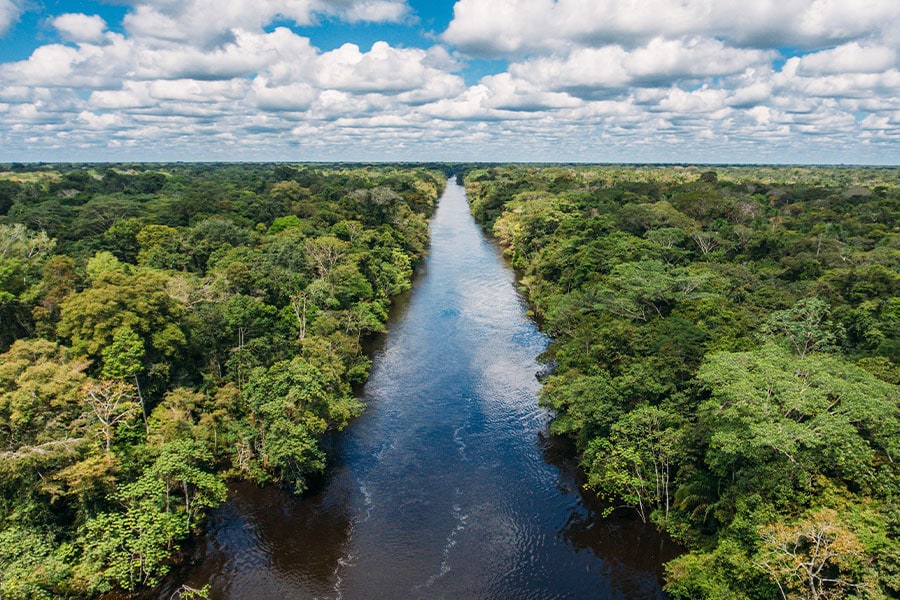 One of the most ecologically diverse places in the world, South America reigns when it comes to wildlife. Very few others are able to claim even close to the dazzling amount of flora and fauna you can find here. From the rowdy howler monkeys swinging in the lush Amazon Jungle, to the once believed-to-be-extinct pink river dolphins. From the islands which acted as muse to Darwin’s theory of evolution to the deepest canyon in the world, the medley of landscapes is intoxicating, inviting in all manner of wildlife to call it their home. South America can be the perfect place for a wildlife holiday, if you just know where to look…

Many of the animals here are endemic to the archipelago, meaning they are found nowhere else in the world. And the amazing thing about the Galapagos is, the animals have no predators, meaning they have no reason to fear humans. That being said, we still need to respect their boundaries, so don’t get too close when taking those all important photos! Chances of seeing wildlife here are, basically, certain. You can easily spot the giant Galapagos tortoise, which can grow up to 6 feet long! The colourful marine and land iguanas, the dosey sea lions and fur seals, and the adorable Galapagos penguins can be found on most shores. As for birdwatching, you won’t fall short with entertainment from the magnificent frigate birds, the blue-footed boobys and flightless cormorants dancing to attract their mates.

The world’s largest tropical rainforest spans across 9 countries; Brazil, Ecuador, Venezuela, Suriname, Peru, Colombia, Bolivia, Guyana and French Guiana. This vast ecological treasure is one of the most biodiverse regions in the world. Over 427 species of mammals, 1294 species of birds, 378 reptiles, 427 amphibians and over 3000 fish call this place home! Some of the favourites are the ever-so-cute sloths, spider monkeys and tapirs. And you will likely hear the howler monkeys before you see them – their screeching can be heard up to 3 miles away! As for bird life, you can find the iconic toucan and the vibrant scarlet macaw, perching in the treetops. For reptiles, keep an eye out for the tiny poison dart frog, the red-eyed tree frog and the slithering anaconda. And if you’re lucky, you might catch a glimpse of the elusive jaguar.

Patagonia is the wildlife lovers playground. Glacier mountains meet Andean peaks to create otherworldly, dramatic landscapes making this region one of the best places on earth for trekking. The National Parks of Patagonia are second to none, and practically teeming with wildlife. Due to the landscape being much less vegetated, Southern Patagonia and Torres del Paine National Park is where you want to be for wildlife watching. Here you can see skipping guanacos, fluffy Patagonian and fueguian foxes, the funky-smelling humboldt’s hog-nosed skunk and a flamboyance of flamingos. If you visit the stunning shoreline you’ll likely spot dosing elephant seals, an array of sea birds, magellanic and king penguins, and if luck is on your side, you’ll see dolphins and whales.

The Wetlands of the Pantanal, Brazil, Bolivia & Paraguay

An immense maze of rivers, lakes, swamps and wooded savannas make up the world’s largest tropical wetlands. Now part UNESCO World Heritage Site and part national park, these wild lands and open marshes are rife with wildlife. Over 42 million acres make up this incredibly biodiverse landscape where many rare and endangered species call home. Spot the striking blue of the hyacinth macaws, the largest parrot in the world. Track the elusive cats – pumas, jaguars and ocelots, and keep your eyes peeled for tapirs, giant anteaters, maned wolves and capybaras sneaking in the long grass. If you’re wandering around the watesedger, keep your eyes peeled for giant otters, anacondas and caimans lurking in the murky swamps.

At 10,725 feet, Colca Canyon is one of the deepest canyons on the planet. Most people are surprised to find that Colca Canyon is twice as deep as the Grand Canyon. This unique ecosystem is home to a variety of Andean species, particularly the camelid family such as alpacas, llamas, guanacos, and vicuñas. Although your chances of seeing one may be small, pumas do also roam these lands. However, many people come here for the birds – specifically the Andean condors. AKA, the ‘king of birds’. This magnificent bird of prey has a wingspan of 3 meters! You can also easily spot eagles and hawks swooping in the skies, picking off their supper. Other interesting fauna you might be lucky to spot is the Andean fox, the giant hummingbird and the sunbathing viscachas.

It comes at no surprise that the largest river in South America has the richest biodiversity of any river on the planet. Over 2500 fish swim in these waters as well as a range of amphibians, mammals and water snakes. One of the most famous animals endemic to the Amazon River is the pink dolphin (inia geoffrensis), whos skin grows a deeper pink hue when excited, just like when humans blush. These were once thought to be extinct but are just very, very rare. The giant river otters are also a favourite to find. They may be endangered but if they happen to be floating along the river you won’t miss them – they often grow to over 6 feet long! Other animals which live in the Amazon River are piranhas, the smiling giants – the Amazonian matinees, electric eels and the giant Amazon River turtles.