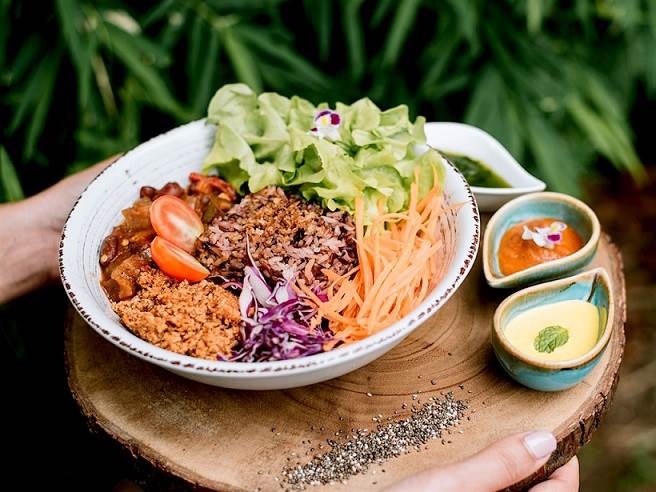 Southeast Asia is one of the most popular backpacking destinations for adventurous and budget-friendly travellers. As well as rich cultures, otherworldly landscapes and some of the best beaches in the world, many flock to this corner of the globe for the unforgettable foodie experiences. While the thought of the Southeast Asian food scene might conjure up images of fried insects on sticks, it actually has a multitude of vegan choices, with plant-based cafes and restaurants regularly popping up in the bigger cities.

Bangkok alone has over 350 vegan-friendly restaurants, according to global vegetarian and vegan restaurant finder happycow. That’s a lot of choice! Bangkok is the gateway to Southeast Asia, with cheap flights and train travel to most other cities in the region making it a launching pad for most backpackers. The majority of travellers will spend a few days exploring this chaotic city, so plant-based eaters will be delighted to learn that Bangkok has an ever growing vegan scene. Head to May Veggie Home for delicious Thai food as well as vegan ice cream and cakes. If you are exploring near Khaosan Road, pop into Mango. On top of this, the local markets dish up a variety of exotic fruit, perfect for that mid-afternoon snack. Thai mangoes are always a firm favourite, with their soft and juicy interior and beautifully sweet taste. Dig into a mango sticky rice and feel yourself do that happy little food dance!

Fast becoming the foodie capital of Thailand, Chiang Mai is the chilled out northern destination that remains high on travellers lists. The city is known for its cooking classes, with most offering vegan only experiences which includes a visit to the local market to pick out your own produce. With over 200 vegan-friendly eateries, many which are big on organic products, it’s no wonder that the “Rose of the North” is a popular destination for vegan foodies. An accidentally vegan dessert to look out for is khanom krok, a miniature pancake made using rice flour, sugar and coconut milk.

Outside the larger cities and their ever expanding foodie scenes, many of Thailand’s staple foods are naturally vegan. Rice, noodles and fresh vegetables and spices are all fundamental ingredients in Thai cooking and won’t be hard to come by. Just ensure that no fish sauce is sneakily added!

Vietnamese cuisine is enjoyed globally, with spring rolls and pho becoming household names as some of the best Southeast Asian meals. Much like Thailand, the larger cities in Vietnam have a fast-growing foodie scene with vegan restaurants that are becoming more popular than ever. Hanoi alone has over 150 vegan-friendly establishments, as well as local markets dishing up fresh, exotic fruit and rice meals. Head to Minh Chay in the Old Quarter for the best vegan pho, or visit Maison de Tet for some super healthy veggie bowls.

Hoi An is undoubtedly the vegan capital of Vietnam and has an astonishingly large number of plant-based restaurants considering the small size of the city, with only around 153,000 residents. Karma Waters not only provides both international and local vegan meals, but also promotes a pay it forward system which provides vegan cooking classes and meals for local families and children in need.

Of course, the capital city of Ho Chi Minh City (Saigon) has the most vegan-friendly restaurants on offer, with over 250 to choose from and ranging from Vietnamese fare to international dishes.

Georgetown, on the island of Penang, is a wonderful mix of Asian history and European charm, as well as being a UNESCO World Heritage Site with a huge range of unique sights. Unbeknown to many, the city also has a large Buddhist-Chinese population, meaning vegan cuisine is not hard to come by. Georgetown alone has over 100 vegan-friendly eateries, many dishing up traditional Buddhist-Chinese meals.

You then have the capital city of Kuala Lumpur, an international hub and very cosmopolitan city – according to happycow it has an astonishing 400 vegan-friendly places. A popular lunch dish in Malaysia is banana leaf stuffed with rice and curry. Vegan options can be found in most banana leaf restaurants. Head to Vinny Jeyaa Banana Leaf Curry House for a large range of veg options. Cendol is a national obsession and can be picked up from cafes or street food vendors. It’s made from sweetened kidney beans, rice noodles, coconut milk and palm sugar – all served over ice shavings. This popular dessert is naturally vegan so just ensure they don’t add any unexpected extras.

Unsurprisingly, Singapore is always ahead of the game. The city already has an enormous food scene and pretty much any type of cuisine you can dream of. With some 1000 veg-friendly eateries, the choices are endless for travellers flocking to “The Lion City”. One of the most popular is vegan fast food joint Veganburg, which provides mouth-watering plant-based burgers complete with all the extras. Singapore also has a high-end range of vegan friendly hotels, such as the Four Seasons who can provide feather-free bedding and cruelty free spa products.

These two slightly less visited gems in the heart of Southeast Asia still offer a decent amount of vegan options. The capital of Cambodia, Phnom Penh, has a good amount of vegan-friendly restaurants and if you stay clear from the insects at night markets you can also find a range of fresh fruit and sticky rice treats on offer. Siem Reap (the gateway to Angkor Wat) equally has a great choice of plant-based foods, with 5 fully vegan cafes and restaurants in the centre. Rural Cambodia poses a little more of a challenge, however towns on the tourist trail such as Battambang and Kampot do have decent options if you do your research. Look out for dishes made with coconut milk and rice with plenty of fresh fruit. Cambodia uses a lot of shrimp based and fish sauce in soups and curries, so unless you are certain it’s not included (sometimes difficult with a language barrier!) stick to rice vegetables.

Vegan-friendly restaurants outside of the major cities in Laos are hard to come by, and you might find yourself surviving on rice and vegetables. Laos is certainly not a top foodie destination in general but many choose to visit this lesser known country on their trip through Southeast Asia. Sticky rice and red beans are always a safe bet and found all over Laos as it’s a popular dish with the locals.  Head to Coco&Co in Vientiane for a good vegan lunch and cake options, or if you’re visiting Luang Prabang, the vegan night market has a specific “vegan and vegetarian” buffet.