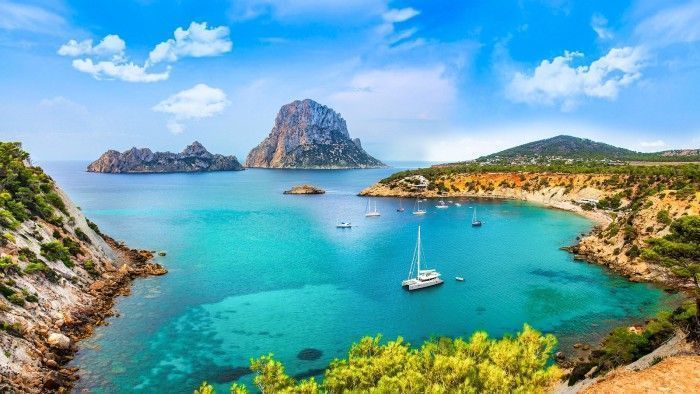 Thousands of people head out to Ibiza for the very first time every year, but many people planning a trip to the White Isle are unsure about when the best time of year to go to Ibiza is.

Have you been wondering about the most appropriate time to visit the island? If so, this guide is for you.

What Draws People To Ibiza?

People visit the White Isle for many different reasons. Your own personal interests, budget and circumstances may well determine when the best time to go to Ibiza is.

There are many great reasons to go to Ibiza because it has grown into a cultural phenomenon over the past four decades.

The island is home to some of the globe’s most renowned clubs, including Pacha and Amnesia to name but two. Pacha opened way back in 1973 and is often described as the place where it all began.

With an average of over 320 days of sunshine, also the temperatures reaching about 25 degrees Celcius from October to December and April to May, there’s plenty of time left to explore the island’s UNESCO World Heritage Site : Dalt Vila.

You may want to join community walks with Walking Ibiza, or take in the aromatic air among pine forests and lavender fields.

Few people know that Ibiza’s current success is due to it being a haven for European hippies in the 70s, looking to escape the demands of western society.

Around the island in the off season, weekend artisanal markets can be found in abundance, offering handmade and eco-friendly goods of all kinds.

Locals and ex-pats return to Ibiza once the season is finished, and as there are no tourists available, the price of everything from shopping, to accommodation, to restaurant food is reduced dramatically, which makes it one of the best value destinations in western Europe. High five for beating the system!

What Else Is Ibiza Famous For?

Not to mention ancient but beautiful buildings, all-night parties that sometimes don’t come to an end until midday, boat parties, free parties and of course its beaches.

Best Time of The Year to Visit Ibiza

The opening parties begin during the end of May and continue until the end of June.

Temperatures are high but generally more bearable than they become during peak season, which means this could be a great time to go to Ibiza if you’re not a fan of sizzling heats.

Activity levels rise in June, though it doesn’t become unbearably busy at this time of year.

However, some of the most notable bars and clubs are still closed at this point.

Nonetheless, you can make significant savings by heading out in June rather than in July or August when prices rise notably, and there are still many exciting musical experiences to be enjoyed.

The crowds start to swell in July, which is fine if you love crowds and don’t mind queueing for the best events.

July is incredibly popular, with students having ditched the textbooks for summer and temperatures rising to around 30 degrees Celcius.

The heat reaches its peak in August, which is known for its electric atmosphere, with all the bars and clubs reaching the highest levels of activity and excitement, not to mention the most illustrious DJs in the  world showcasing their talents.

BBC Radio 1 visited the island in August 2016, generating a phenomenal atmosphere across the island and broadcasting DJ sets that quickly become classics. This weekend was seen as one of the main highlights of party season.

In addition, August is the most expensive part of the season and also the busiest, so if you are on a limited budget or dislike huge crowds, August may be the wrong time to visit.

However, if you’ve got the cash and are eager to soak up the atmosphere of peak Ibiza, it could be ideal.

September sees the season come to a close with a series of phenomenal closing parties. Head out in September and you’ll get to miss the biggest crowds whilst still experiencing Ibiza at its best.

The closing parties are seen as an epic climax to the season, and this time of year is also great if you’re a fan of slightly cooler temperatures. The closing week usually takes place at the start of October.

Winter parties and the off-season

Many people choose to head out to Ibiza outside of party season.

Since temperatures do start to dip, the nightlife becomes much more low-key. However this is a great time to meet locals and experience a more relaxed Ibiza.

Heading out to Ibiza off-season can be a great move if you’re more interested in relaxing and taking in the  local culture of the island rather than partying.

Some people love the serenity of the off-season period, though many have described it as too low-key and depressing, especially those that have enjoyed it at is most vibrant.

A number of high-profile clubbing events do take place in the winter, although these are generally on a much-smaller scale. Pacha actually keeps its doors open throughout the winter months.

We hope this guide has been of use to you if you have been wondering what the best time to go to Ibiza is. Perhaps you have more tips to add or questions to pose? If so, tell us below.

We think the best times to go Ibiza are…