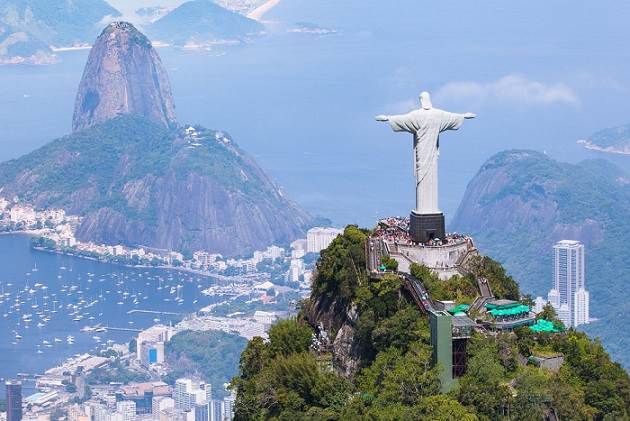 Yesterday it was announced that one in three people in the UK cannot place Brazil on a map. This is despite the football mad nation making up nearly half of the South American continent. With the kick-off of the World Cup now less than 36 hours away, Brazil is getting ready to have all eyes on her.

Brazil is the only Portuguese speaking country in the Americas.

Along with pinning Brazil on the map, those asked also struggled to name the most common language used in Brazil. Unlike the rest of South America, Brazilians speak Portuguese.  As the only Portuguese speaking nation in the southern hemisphere, they take their language seriously and it is part of their national identity despite being independent from Portugal for nearly 200 years.

Rio Carnival is one of the biggest parties in the world

A devoutly religious Catholic country, the world renowned Rio Carnival takes place on the weekend before Shrove Tuesday and the beginning of Lent. Today, in Rio, the Carnival weekend is slightly more sordid than the original organisers intended with revealing costumes and swaying hips.  The four day weekend is crammed full of masquerade balls, street parties and sun-bathing in the tiniest of costumes on the busy beaches. At night, the Sambadrome comes alive with parades of samba schools showing off their best routines to win the prize of best samba school.

The Amazon Rainforest is the largest rainforest in the world

Not a surprise here but the Amazon Rainforest actually holds more mysteries than any other place in the world. It is constantly the source of new discoveries, species and ecosystems and the Amazon currently shelters up to 70 indigenous tribes who have had little or no contact with the outside world. The Amazon Jungle cannot be completely attributed to Brazil however as it spreads in to its neighbouring countries although Brazil retains a 60% chunk of it.

Brasilia was not always the country’s capital city. Before 1960, Rio de Janeiro was the federal capital of Brazil. The idea was to move the capital city to a more central location, Rio de Janeiro being nestled on the south east coast, was many hours flight from the northern territories.  The city was designed by Lucio Costa and Oscar Niermeyer during an era where the world was infatuated by air travel.  The wings were the residential areas while the fuselage was the cities centre. Since 1960 the city has expanded in to an urban sprawl in all directions but the outline of the plane can still be seen.

Cachaça is the most popular liquor in Brazil

The number one export of Brazil, sugarcane has multiple uses and one of them is the distilled spirit, cachaça. Brazil makes over a billion litres of the liquor and the majority of it is used to make the country’s national drink, caipirinha. This drink is made with sugar and lime and like its more well-known sibling, the mojito, can come in a variety of different flavours.

You would never expect to find one of the most beautiful Opera Houses in the world deep in the heart of the Amazon Jungle. The theatre was built during the 1890’s when rubber was in demand and the city of Manaus was booming. Built from materials found mainly in Europe, the theatre is a symbol of the wealth and extravagance of industrial era, now long lost and depleted.