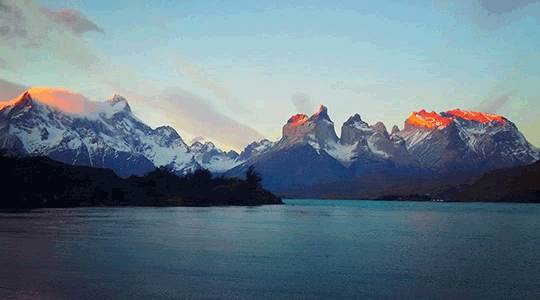 Patagonia is the wild child of South America, nestled deep in the south of the continent straddling both Chile and Argentina. Coated in mountains, forests, lakes, glaciers and more, the rugged region has been attracting keen hikers for decades. Having just embarked on my own Patagonian adventure for two weeks, I have compiled a list of what you should expect if you’re planning a holiday to Patagonia.

The weather really does change by the hour

I was told it multiple times which meant thankfully I was well prepared, but the weather in Patagonia truly is unpredictable and if you don’t have the right gear you’ll end up pretty cold and miserable. I travelled early November and temperatures ranged from 4 degrees to 16 degrees, with rain, wind, snow, and sun all between. For every hike we did, I was told to pack my waterproof trousers and jacket as well as plenty of layers for when the temperatures changes. While the towers hike started off a bit cold and grey, it was actually snowing on the top and then the sun came out! It can all happen so you need to be prepared.

I knew there was wildlife in Patagonia but I didn’t expect to see so much of it, so often! Herds of guanacos, who are more than used to human presence and vehicles, will happily roam along the roadside, condors soar above and we even had foxes roaming through our camp. Pink flamingos rest happily in many of the lakes and you’ll see a huge variety of birds through the forest hikes. If you’re starting further south, visit the island of Magdalena to walk amongst penguins. Although the puma does exist in Patagonia, they are rarely seen in any close proximity to humans but I know people who have been lucky enough to spot one.

If you’ve planned your trip to Patagonia around the incredible Instagram shots you saw of the mountains, thinking it’s an easy stroll, then you might be in for a surprise. These viewpoints are more often than not the result of a long, challenging, uphill hike and you need to be prepared for embracing them if you want to get those perfect Patagonia photos. While you can definitely see some incredible landscape from all angles of the regions, to get those classic blue lagoon snaps with the mountains soaring in the background, you’ll need to hike. The two longest hikes I did were the Base of the Towers in Torres del Paine, and the Laguna de los Tres in Los Glaciares. Both were around 19km, involved lots of uphill and took around 9 hours from start to finish.

It goes without saying that Patagonia is a large region – it spans across two countries after all! I highly recommend trying to visit both the Argentinian and Chilean sides of Patagonia to experience as much as you possibly can. Many people, and the Tucan Travel group tours, start in the city of Punta Arenas which has regular flights from Santiago, Chile. From here it’s around an eight hour drive to reach Torres del Paine National Park, known for its mountains, lakes and hiking trails. If you wish to continue to El Calafate, the base for visiting the Perito Moreno Glacier, it’s another seven hours. If you’re visiting Patagonia you want to give yourself enough time for long travel days.

If you want to take in everything Patagonia has to offer, truly enjoy hiking and take time to breath in between, you’ll want to embrace the concept of slow travel. Ideally, spend a few days in Torres del Paine National Park and a few days in Los Glaciares National Park so that you can experience multiple hikes but also have some recovery time. And restaurant servers? They are rarely in a rush, and it’s quite normal to wait longer than you are used to for any request you make.

Don’t forget about the border crossing

When you’re blissfully driving through beautiful countryside the border between Chile and Argentina can easily creep up on you. Depending on the time of year it can get quite busy so in order to speed up the process you should be as prepared as possible. If you are coming from Chile, keep the small piece of stamped paper (that looks like a receipt) that you’re given at the airport as they will request this when you leave the country. If you have lost it, they might ask you to fill in more paperwork. It’s also forbidden to take fresh produce with you into Argentina and this will be confiscated if they find it and again slow down the immigration process. Have your passport and any visas ready to keep the process as streamline as possible.

Tourism brings both positive and negative aspects to places around the world. In areas of over-tourism, you’ll often see the remains of human presence such as litter and other general waste. However Patagonia is incredibly clean and it’s vital that everyone strives to keep it that way. The mountains do not have bins readily available for you, it’s no ones job to clean up your waste other than yourself. Because of this you should always travel with a small bag to take your litter back with you, and also a small pack of tissues. While some of the popular hikes have toilets, most don’t and you are expected to bring back used toilet paper to dispose of correctly. It also goes without saying that you should be more environmentally conscious of your actions when in a remote place such as Patagonia. In 2012 a huge part of Torres del Paine burnt down because one traveller decided it would be smarter to burn his toilet paper rather than take it back.

Many people still seem to have this preconceived idea that South America is a cheap destination – let me tell you, it’s not! Chile is currently listed as the most expensive country in South America and depending on your country of origin and currency you might find it’s not all that different from back home. I was converting to GBP and found that many meals were not far off what I would pay in the UK. If you want the best rates, you’ll need to book airfares and accommodation as far in advance as possible as they can book up fast during summer. You also need to consider entrance fees to the national parks, however all the trails are free to use.

Even if your accommodation has WI-FI, most of the internet connection in Patagonia is very touch and go so if you expect to be offline for a few days, you won’t be disappointed. Take the chance to get away from it all and simply enjoy being in the mountains.

If you’re camping, you won’t have access to electricity so you’ll need a power bank to keep your phone charged. While many people do take professional cameras, thanks to the quality of smartphone images people like me only snap away using a phone which runs the battery down pretty fast so I also carried a charger on the longer hikes where you’re out and about for up to 10 hours.

A reusable water bottle is vital and one of the most responsible things you can pack!

Forget the plastic bottles, you can drink the water all over Patagonia. I took my trusty Chilly’s bottle and refilled it using streams in the mountains on each hike. The water from the glaciers is so cold and always flowing so bacteria doesn’t survive. If you’re extra cautious, bring a bottle with a filter.