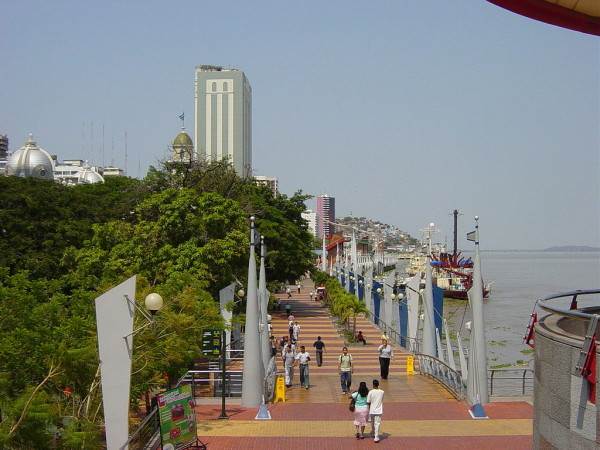 Hundreds of thousands of visitors walk along the Guayaquil boardwalk each year. As Ecuador’s largest city, Guayaquil is often the gateway to the Galapagos for both local and foreign tourists. And yet, just across the river from this city lies another island, one completely forgotten. Santay Island is a huge, 2200 ha. island located in the middle of the Guayas River between the cities of Guayaquil and Duran. The island has been somehow preserved throughout the decades of urban growth and remains a natural sanctuary in the region.

The island is inhabited by a small number of people but the majority of the island is pristine nature. The island is often called the lungs of the city, an important filter of both cities’ smog. It is also an important home for the regions endangered birds and offers excellent bird watching. This, in fact, is about all the island was known for until recently and the only real visitors in the past were missionaries or serious bird enthusiasts.

For many, many years the Santay Island has been completely ignored by both the local and national governments. The island plays a crucial role in “filtering” the city smog and is one of the last real natural sanctuaries in the greater Guayaquil area and yet, it has been completely overlooked in terms of conversation until just a few years ago.

After issues between the local Duran government and the people on the island, the national government stepped in. The whole island was declared a National Protected Area and work began to both preserve and promote the island. Before the end of 2013, the island will be connected to the cities of Guayaquil and Duran by long bike and pedestrian friendly bridges. The island itself will offer bike paths, hiking trails, and overnight cabin accommodation to city residents looking to escape the city.

The 47 families (around 200 people) currently who live on the island were considered more or a “problem” than anything. These people have been residents of the island for many, many years and while they have established their own village on the island, there right to the land was never official. The government wished to convert the island into a nature park for both Guayaquil and Duran residents but had to acknowledged the claims of the local people to the land, based on their long residency and their own conservation of the island. In the end an agreement was reached to build an “eco-village” and to provide each family on the island a new home, with running water and sewer.

In the end, over $25 million dollars will be invested on the island and the two bridges with the hope that the island will continue being an important natural reserve between the cities but also a great national park, enjoyed by both Guayaquil and Duran residents.