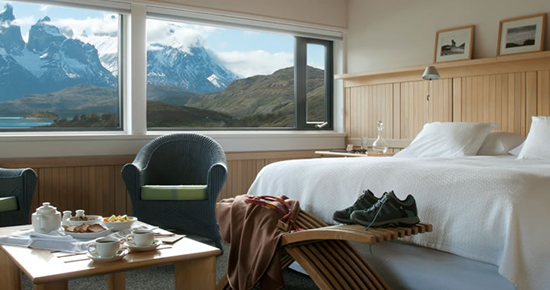 At Explora’s Salto Chico hotel in the heart of the world-famous Torres del Paine National Park breathtaking vistas come standard with every room.

The central feature of every room at Explora’s Salto Chico Hotel is not a piece of artwork or an impressive piece of furniture, but the window. Walking into the space it is hard to do anything but stare out at the spectacular view of the Paine Massif, transforming every hour with the changing light and moving clouds.

It is no surprise that the luxury international travel magazine Elite Traveller named the view from Salto Chico as one of the best in the world. Located within the Torres del Paine National Park, the hotel enjoys unparalleled views of the world-renowned patagonian landscape.

Salto Chico made the list alongside other stand outs such as the Oberoi Amarvila, in Agra, India that looks out to the beautiful Taj Mahal and suites at the Plaza Athenee, in Paris, France that offer dazzling views of the Eiffel Tower.

However, unlike the majority of the hotels listed by Elite Traveller, every guest at Salto Chico enjoys a view of the untouched landscape, not just those staying in luxury or penthouse suites. Living up to its goal of making sure visitors “are not isolated from nature, but placed ‘within’ it,” just over half of the rooms look out onto the mountain peaks, while the rest peer out over the waterfall that gives the hotel its name.

Elite Traveller is not the first to appreciate the unique luxury found at Explora’s Salto Chico Hotel. This past June, Travel + Leisure magazine named it the sixth best lodge/resort on the planet. Last year it was recognized at the World Travel Awards as Chile’s Leading Boutique Hotel.

Of course Salto Chico has its amazing setting to thank for much of this praise. Chile’s Torres del Paine National Park is so spectacular, in fact, that it was named the 8th Wonder of the World. Last year  the 2,400 km² park welcomed a total of 143,253 visitors and it is already on track to far surpass that this year.