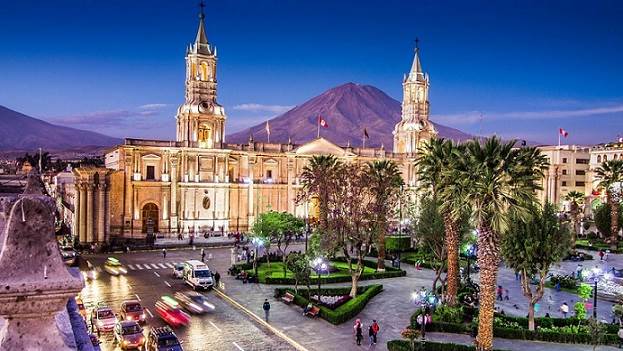 Archaeological evidence suggests that the region was inhabited by the Aymara in the pre-Inca period. According to legend, the city’s name comes from two Aymaran words: ari (peak) and quipa (to lie behind).

Another local legend claims that the city was named by the fourth Inca, Mayta Capac, who upon seeing the natural landscape, uttered “Ari qhipay”, which can be translated from the Quechua to mean “Yes, stay.”

The Spanish conquered the region and founded the city as we know it today on August 15, 1840. It was during this period that many of the city’s buildings and structures were constructed from sillar, a white volcanic rock material. The prominence of sillar in the city’s architecture is what gives Arequipa its nickname, “The White City.”

Arequipa played a major role in the country’s history during the 19th century, when it housed Peruvian nationalists and staged rebellions that eventually led to Peru’s declaration of independence from Spain on July 28, 1821. The construction of the Southern Railroad in the 1870s and the Pan-American Highway in the 1930s brought new trade opportunities to the city, and today the city is an important regional hub for trade and industry, as well as a popular destination for domestic and international tourism.

What to do in Arequipa

Arequipa is an immensely popular travel destination for adventure travellers, as it is within easy reach of the Rio Chili, the Colca Canyon, and the volcanoes El Misti and Chachani. The city is a departure point for treks, hikes, climbs, downhill biking and whitewater rafting.

In between adventures, take a walk around the city’s Historical Centre to appreciate its architectural beauty. Many of the churches, archways, houses, and structures are made from sillar, giving the city an impressive grandeur. The colonial-era Santa Catalina Convent is a popular architectural attraction. Occupying two full city blocks the convent is almost a city within a city, a centuries-old self contained retreat which is now partially open to the public for daily tours.

History buffs might be interested in a visit to the Museo de Sanctuarios Andinos to see the mummy of the frozen ice princess, Juanita. The mummy was retrieved from the slopes of El Misti, well preserved by the freezing temperatures, and provides a fascinating if morbid insight into Incan human sacrifice rituals.

Finally, don’t leave Arequipa without trying one of its spicy regional dishes at a picantería. The rocoto relleno, a spicy pepper stuffed with meat and layered with a rich cheese sauce is a regional delicacy.

Be aware of the altitude

If you’re arriving from a destination on the Peruvian coastline – Lima, Paracas, Ica, or Nazca – you should take a day to get adjusted to the city’s altitude, especially if you plan to do any trekking, climbing, or downhill biking in the subsequent days.

Soroche (altitude sickness) is caused by a lack of oxygen and can strike any traveler, regardless of your physical strength or fitness level.

Cases of altitude sickness generally include mild side effects like headache, fatigue, and nausea but can become extreme if left untreated. Soroche pills are sold in pharmacies; locals suggest that drinking a cup of mate de coca (coca tea) may also help cure altitude sickness.

Arequipa sits on the tip of Peru’s southern desert, and is characterised by a warm and arid climate. Daytime temperatures sit favorably in the low 20s (68-70°F) all year round, white nighttime temperatures are much chillier, falling as low as 5°C (41°F) during the winter months of June, July, and August.

It’s a good idea to pack layers for travel to Arequipa. During the daytime, you’ll need T-Shirts, lightweight shorts or pants, and a pair of sunglasses; at night, you’ll want warm sweaters, jackets, hats, and gloves to help keep you warm.