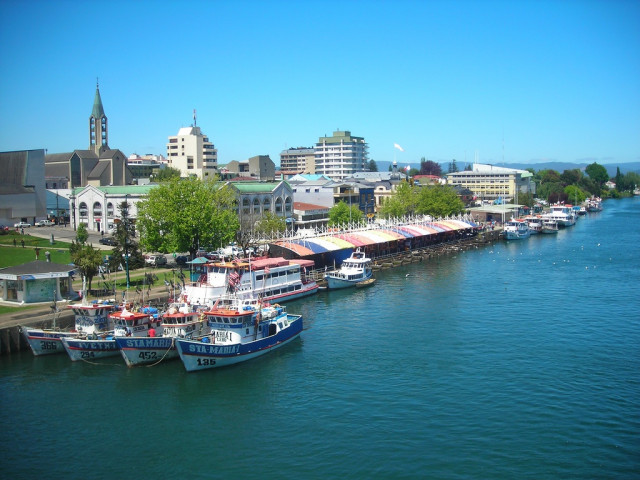 Valdivia, capital of the Los Ríos region, is a unique city set in lovely natural surroundings.

It was founded by the Spanish in 1552 as a war fortress, with its strategic location on the river and only 12 miles (20 km) from the Pacific Ocean. In the 17th century it was captured by the Dutch, but was soon reclaimed. German immigrants arrived mid-19th century and drove cultural and industrial development, still visible in the city’s characterisic Germanic architecture.

Valdivia is small and easy to get around, and visitors and locals alike enjoy the locally brewed beers and German-style meat.  Enormous sea lions can be spotted along the coast, and a trip along the river reveals houses which sank during the massive tsunami in 1960 that reshaped the landscape.

There is an extensive network of walking trails on the shores of the Cruces and Cau Cau rivers, as well as a botanical garden where native species and medicinal plants grow.  At the Universidad Austral de Chile, on the city’s northwestern shore, there is also a huge park situated at the entrance of the main campus.

The Torreones Fortress is a reminder that Valdivia was originally built as a fortress with two towers located at opposite ends of the city.  Part of the remains date back to 1774.  One of the towers, named the Torreón del Barro Tower, is located near the bus terminal at Picarte Avenue and Condell Street.  The other tower, Los Canelos, is located at the intersection of the streets Yerbas Buenas and Yungay.

The River Market, with its rich colors and smells, is open every day from 8:00AM to 3:00PM. All types of seafood are bought and sold there, as well as vegetables, eggs, handcrafts, and fruit jam.  You can enjoy watching locals feeding enormous sea lions by the side of the river.

There are three museums located in the Isla Teja area of the city.  The Van de Maele Historic Museum is a national monument and displays a collection of artifacts from both the German colonization and pre-Hispanic native culture (Los Laureles Street, Teja Island).  The Phillipi Museum, constructed in 1915, displays an interesting collection from German explorers and naturalists the Phillipi brothers.  The Contemporary Art Museum (MAC) was founded in 1994 with support from Hernán Miranda, a local artist, and the Universidad Austral.  It is located in the former Anwandter Beer Brewery, and houses permanent art exhibitions along with a view of the river (Los Laureles Avenue, Teja Island, +56 (63) 221968).

Sailing to Corral and Mancera Islands is an important part of any trip to Valdivia.  Sailing towards the mouth of the river, boats reach Corral Island in about 2 ½ hours.  Visitors to the island can visit San Sebastián de La Cruz Castle, which was built in 1645.

Mancera Island offers a real, traditional Chilean experience, with its main attraction, the San Pedro de Alcántara Castle. Now declared a national historical monument, it was built in 1645 after the area was reclaimed from the Dutch.  The island is also the site of several cultural festivals during the summer.

The town of Los Molinos is located 11 miles (17 km) west of Valdivia.  It boasts a charming beach surrounded by green hills and fishing boats that rest on its shore. The island’s biggest draw for many, however, is the fresh, abundant, and inexpensive seafood.

Oncol Park is 754 hectares of pure, native Valdivian forest.  Among the animals living in the park are the little mountain monkey and Darwin’s frog, both of which are native to the area.  From the 715 m summit of the hill, a clear view of the Andes and its volcanoes are clearly visible to the east, while the Pacific Ocean is visible to the west.  Overnight accommodation is available inside the park, as well as zip lining and hiking paths.