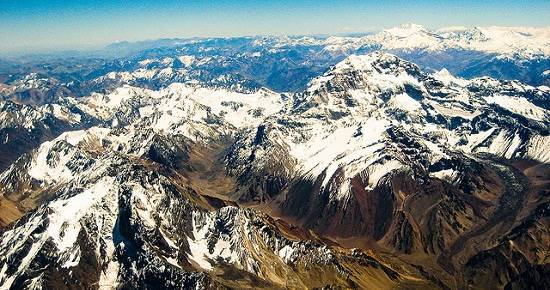 From Santiago to Mendoza or Temuco to Neuquen, here are two economical yet stunning ways to experience the Andes mountains by bus.

The sublime Andes Mountains that mark Chile’s border with neighboring Argentina make for one the region’s most memorable landmarks. While they can seem omnipotent and forbearing, one way to begin to understand these jagged peaks is by crossing them.

A host of tour agencies run horse treks and boat crossings across the border for a pretty penny, but one economical and practical way to discover these majestic mountains is simply by bus. Here are two ideas for spectacular Andean crossings that won’t cost you an arm and a leg.

With multiple busses leaving each day, the Santiago to Mendoza, Argentina border crossing is undoubtedly the most trafficked of Chile’s Andean passes. This route through part of the thickest section of the Andes involves a steep climb up a series of hairpin switchbacks before reaching the border. With mountain peaks glistening with snow and multi-colored rock faces, this crossing’s epic vistas will have you the wide-eyed and open-mouthed the whole ride.

Buses leave from Santiago’s main terminal located at the Universidad de Santiago metro stop. The terminal is actually divided into two separate buildings on opposite sides of the street. The one closest to the subway stop holds just two Chilean bus companies: Turbus and Pullman. The second terminal across the street houses all of the companies that go to Mendoza. An array of companies make the voyage including Cata Internacional, AndesMar, and Tramat. The fare ranges from US$25 (CLP12,000) to – US$63 (CLP30,000) depending on the season and whether you choose cama (full bed) or semi-cama (half bed) seats.

An alternative route is the Andean crossing from Temuco to Neuquen, which is far less trafficked but just as stunning. While the Andes are much lower at this latitude, the luscious forest-coated cliffs and valleys make for a spectacular ride that dips in and out of ravines and over wheat-rich knolls. The road burrows through Latin America’s second longest tunnel, Túnel Las Raíces, which was originally designed for train traffic.

As the route ascends, with a keen eye you’ll begin to spot Araucanía (Monkey Puzzle) trees, a beautiful native evergreen with a regal trunk and an umbrella-like canopy. This ancient species can reach 130 feet (40 meters) and live for centuries. You’ll slowly weave out of the mountains and emerge onto the dry and expansive plains on the Argentine side of the border before reaching Neuquen.