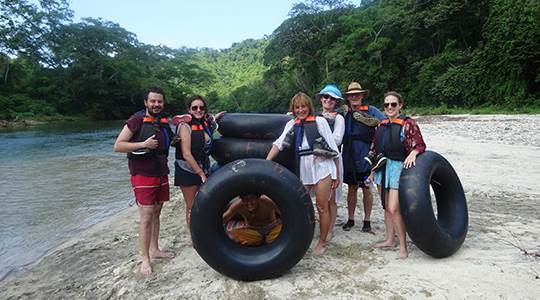 When I had initially found out that the paradise destination of Tayrona National Park was closed for the whole month I was travelling around Colombia, I was understandably devastated. I had been looking forward for those two days on my Colombia Highlights tour and had gazed at numerous images imagining myself on the sandy beaches of Colombia’s Caribbean coast line.
The infamous national park, reached via dense jungle was closed during the month of November to restore the ecological environment that attracts so many tourists travelling in South America. Luckily Tucan Travel had organised something just as superb to pacify our need for beach delights.

We were to stay in Palomino at a resort close to Tayrona and where we could spend our two nights swinging in hammocks just like the original itinerary had mentioned. Submerged within jungle surroundings it was perfectly peaceful, the only noise being made from the lapping of the waves. It was a perfect place to switch off from reality including our mobile devices. The food was delicious and the family who lived there made a constant stream of tropical juices, from fresh exotic fruits like lulo and guava. A short walk up a foliage covered hill led up to a viewing point where you could overlook the ocean as the sun went down.

Although many of us were tempted to stay and enjoy the sun-kissed charms of our retreat, the next day we were to spend tubing down Palomino River. After a short bus journey we hopped off down the road where some locals were waiting with the giant rubber rings that would be our transport for the afternoon. For those who are unfamiliar with tubing, the activity involves floating down a river on giant rubber tyres. It is a peaceful activity and if you are lucky you may spot wildlife on the banks or in the trees.

Before we could become water babies we had to get to the start of the tubing trail first- through the jungle! With hoop in hand, we began our hike with our helpful guide and his enthusiastic dog leading the way through the tropical forests of Colombia. On the way we passed an army of leaf cutter ants and a lone pig snuffling in the undergrowth. We were also lucky enough to stop and let an indigenous family pass by on horseback. Our tour leader mentioned to us we should not take photos at this point, as due to the ancient traditions, they believed that photos took away the soul. We respectfully stopped to let them pass, a truly wonderful experience to see such authenticity like that.

After a lengthy hike we reached our destination. The river was split into two sections of temperature, the cold section flowing straight from a glacier. After a quick dip to cool down, it was soon time to board our rings. Forming a human chain via our ankles, we sat in the rings and prepared to set sail. The water was relatively shallow so although we had lifejackets on, none of us felt we were going to be dragged off to sea! The group cruised down the river in this fashion until we decided to “do it alone” and broke away from each other. Each of us sailed peacefully downstream, admiring the nature and enjoying the cool water on our feet. Every so often our guide had to drag one of us (me) from the banks where our ring had petulantly decided to venture off on its own accord.

I had a moment which made the rest of the group end up in hysterics. It was always going to happen. As the rest of the group paddled their ring to the riverbank to stop for lunch, my ring decided to go rogue. In the end I grabbed a branch and clung to it hoping I wasn’t going to sail straight down to the sea (at this point I forgot I was in water that was 2 foot deep.) Instead I yelled to my boyfriend “I am waiting to be rescued!” It looked like that scene in the Lion King where Simba clings to the tree during the stampede (except with less wildebeest.) Either way it was NOT my finest moment.

Thanks to the yet again helpful guide, I was eventually led back to shore to reunite with the rest of the group for a hearty meal and to explore the Tayronaka Museum, full of indigenous Colombian items from the Tayronaka tribe. A perfect way to end an amazing afternoon!