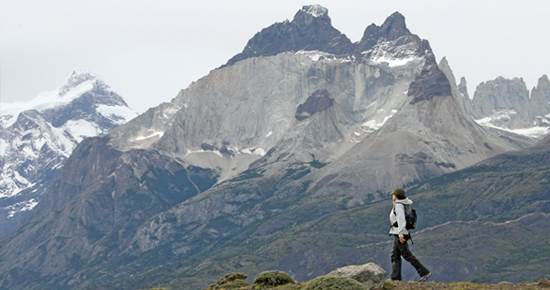 Thousands of backpackers flock in every year. Visitors establish an intense and deep bond with Patagonian nature.

Declared a National Park in 1959 and a Biosphere Reserve in 1979, the biodiversity within the Torres del Paine National Park is exceptional: condors, pumas, huemules, foxes, caranchos (carrion hawks), guanacos and hundreds of species of birds, apart from four ecosystems and the granite of the Andean peaks. Also impressive are its waterfalls, multichromatic lakes, torrential rivers, glaciers and the imposing Campos de Hielo Sur. The Park encompasses around 242,242 hectares of protected land.

Although several sectors of the park can be traveled by road, nothing compares to the possibility of walking for days along its rugged terrain. There are a series of equipped camping grounds, some offering shelters and all with bathrooms and food supplies, making it possible to penetrate more deeply into the natural surroundings of this site. It is located 115 kilometers north-east of Puerto Natales (link a la ciudad) and has become the main attraction for trekking at a domestic level and a much-desired destination internationally.

Over one hundred thousand people arrive at this remote spot every year, attracted by its impeccable natural scenery where it is possible to observe native fauna living in the wild, impressive glaciers such as Campos de Hielo Sur – a veritable frozen sea that extends over large part of the area protected by Conaf, the National Forestry Corporation. From the entrance at Laguna Amarga, the arrival point of most of the carriers that link Puerto Natales with the Park, two of the most attractive trails begin: W and Circuito Grande.

A medium-difficulty trail requiring an average of 4 to 5 hours of walking per day, it links the area of Hostería Las Torres with the Lago Grey Shelter in three or four days. The walk includes notable sights such as the Las Torres overlook and the Italian camp with the ascent to Valle del Francés. The view from here includes the Paine range and Lake Grey, with hundreds of small icebergs broken off from glacier faces that extend to the lake basin. It is a quick trek with a large number of people walking on the trails.

At least seven days are required to complete this circuit. Apart from passing by the sites mentioned in W, it has added attractions such as the Serón area, the Dickinson shelter with beautiful panoramic views of lakes and glaciers that descend from snowy mountains, and the famous John Garner pass. This is the most difficult part of the entire trek, because it is necessary to climb almost one thousand meters over an irregular moraine, but it is worth the effort. At the top and prior to beginning the descent, the most powerful panoramic view in Chile is on display: Campos de Hielo Sur extends as far as the eye can see. The view of the blue crevices that mark the separation between ice masses is the great reward for those who decide to embark on this adventurous trek.

For both circuits it is essential to be equipped with all the required implements for a long trek in the midst of natural surroundings. A first-aid kit, sun-block, sturdy shoes and warm waterproof clothing. The rest consists of respecting the park rules and enjoying the magnificent scenery of the local mountain range and its classic peaks such as the Torres, three granite elevations or Cuernos del Paine (Paine “Horns”).