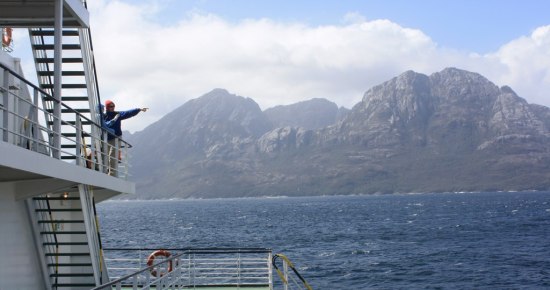 Both a cargo and passenger line, Navimag is the only service transporting tourists through the virtually untouched landscapes of Chilean Patagonia, stretching from Puerto Montt in the north to Puerto Natales in the south, the gateway to Torres del Paine National Park.

Along its southwestern periphery, the Chilean coast is a remote fringe of uninhabited islands, sharp peaks and steep granite cliffs, laced with a network of windblown channels and fjords.

Largely inaccessible by road, one of the only ways for tourists to experience Chile’s rugged Patagonian landscape is from the water. And on the water, only one option exists: the multifunctional Navimag Ferries, at once floating hostel, cargo carrier and transport lifeline for local inhabitants.

Now past its fortieth year of operation, Navimag began as a cargo line in 1979, the only means of transporting goods from the population centers of central and northern Chile to the growing cities of the far south without passing through Argentina.

Within ten years, tourism in southern Chile had begun to take off. “The company suddenly realized it had this route that was undiscovered and interesting for tourists,” says Navimag guide Percival Ramírez.

Navimag began its first tourist service in 1989 to the glacier at Laguna San Rafael, and in 1993 began carrying tourists on its Puerto Montt—Puerto Natales route. Twenty-one years after its first tourist trip, the company transports 30,000 passengers annually.

With about half the space on Navimag’s ferries still reserved for transporting cargo, travelers of all stripes share space with vegetables from the central valley and meats from Patagonia. Cabins are tight but comfortable and bathrooms both shared and private have plenty of hot water. Food served on an all-inclusive basis in the cafeteria-style dining room is simple, tasty and ample.

Groups of young backpackers gather on the top-deck pub, while families and older couples play card games over bottles of Chilean wine. Others admire passing scenery from the large open decks, or take shelter from the wind in the ship’s bridge with the captain and crew. All this is part of what the staff calls the ‘Navimag Experience,’ itself now an established stop on the tourist route through the Southern Cone.

On-board guides like Ramírez give daily talks on the flora, fauna and geology of the region to help passengers better appreciate the surrounding scenery and pass hours of constantly changing weather. Guides receive training through the Chilean National Forestry Commission (Conaf) and use their time on the water to gather data for scientific research, which goes to universities and research organizations in countries like Chile, the US and the UK.

Traversing the western boundary of the vast and otherwise inaccessible Bernardo O’Higgins National Park, Navimag’s Patagonian Fjords route carries passengers to some of the region’s most magnetic attractions, past snow-capped mountains and native evergreen forests growing sideways, prostrate to the brutal winds.

On the third day, the ferry reaches the remote town of Puerto Edén, home to the last pure descendents of the Kawesqar indigenous community. Puerto Edén’s 120 residents live in the collection of clapboard houses that border the small, icy bay, connected only by wooden boardwalks, slippery from the rain that falls almost every day of the year.

The Navimag ferry is the only means of transit in or out of Puerto Edén. Weather permitting, passengers disembark in town for up to an hour. Passengers from the village join the voyage as it continues north or south, heading out to the cities of Puerto Montt or Puerto Natales.

Later that day, the ferry reaches Pio XI glacier, the largest in the southern hemisphere and one of few in the world that is still advancing. Six kilometers across, 80 meters high and 64 kilometers long, the glacier’s scale can only be grasped in person. During the boat’s slow approach, easily 40 minutes or more, the vivid blue shelf of ice slides into view, revealing itself gradually.

Foul weather is part of the region’s forbidding, mysterious personality. Mornings of dense, obscuring fog burn away to brilliant sun, strong cold winds and sudden rain showers. Gray cliffs and ice can emerge suddenly from the fog into sunlight, only to disappear again as the next bank of clouds descends.

But when the wind slows and the sun comes out, passengers gather on the decks, watching awestruck as the emerald islands slide by and waterfalls of snowmelt bend down the hillsides like ribbons. Carved out millennia ago by the churning flow of glaciers, this region is one of the treasures of Chile, untainted and eternal.