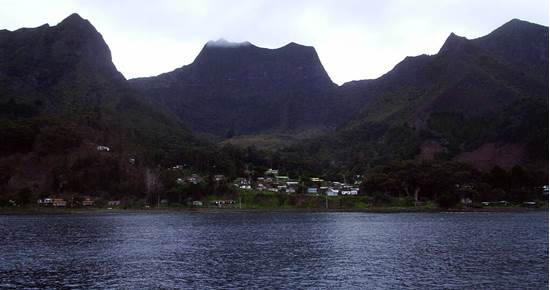 Over 500 kilometers distant from the continent and belonging to the Juan Fernández Archipelago, this island boasts legends, splendid ocean waters for snorkeling and fishing, and trails for trekking around forests of incomparable wonder.

Marcelo Schiller swiftly climbs up mountain slopes, deftly avoiding the edges of the huge gorges found everywhere on Robinson Crusoe Island’s terrain. The island’s name comes from Daniel Defoe’s famous novel, which was inspired by the life of Alexander Selkirk, the best-known inhabitant of this place.

Populated by mountains up to 900 meters high, such as the magnificent El Yunque hill, the island’s rugged landscape blends in with the Pacific Ocean’s depths. We are surrounded on all sides by mountains and sea, as Schiller, our guide, keeps up a brisk pace, heading toward Selkirk’s lookout.

Robinson Crusoe Island is part of the Juan Fernández Archipelago (named in honor of the Portuguese mariner who discovered this isle, which lies 670 kilometers west of continental Chile). Receiving very few visitors, it is one of the richest areas in species endemic to Chile (close to 60% of the total), and was declared a Biosphere Reserve by UNESCO in 1977, and has held the status of National Park since 1935. Definitely, the island is a place worth visiting. And not just for its wilderness heritage.

Treasure No. 1: Its People

Schiller is proud of his homeland: “I was born and raised here, brother. We islanders love our island very much.” He is familiar with every nook and cranny of Crusoe, because for each of its 600 inhabitants it is their back yard, an extension of their lives and a source of pride.

The reasons abound. Historically, no pre-Hispanic settlements were ever established on this piece of land. There are no primitive indigenous settlements, nor any proof that any ever existed, and the first traces of “human presence” date from the arrival of the sailor Fernández. After this, the island, together with the neighboring Santa Clara Island to the extreme west, were visited intermittently, every five or six years, by the ships of corsairs and pirates who found it ideal for replenishing their supplies of water and vegetables, nursing sick crewmen and butchering the goats that they carried aboard ship and that finally multiplied and took over the territory.

During the struggle for independence, solitary Crusoe Island served as a prison for prominent intellectual patriots.  It was in 1876 that the Swiss baron, Alfred Von Rodt, the true instigator of the island’s colonization, arrived in Chile and saw the vision of his life’s greatest opportunity: the Chilean government offered to lease out the archipelago.

Von Rodt’s entrepreneurial spirit spread to around a hundred Chileans, a few Italians, Germans, a Portuguese, an Englishman, a Frenchman, a Russian and a Swiss. They  founded the settlement that until the present maintains its roots and ties through the 500 inhabitants who make a living in the town of San Juan Bautista, mostly engaging in fishing, especially the highly valued lobster.

As they walk along the town’s steeply-inclined streets, foreigners must comply with the custom of greeting each person they see. It is part of the islanders’ identity to say “hi” to every neighbor that one meets, even if it’s the second or third time they come across each other. It’s the friendly thing to do.

The islanders are famous for their friendliness. They are capable of inviting you to huge dinners and taking you around the entire island if they take a shine to you.

Treasure No. 2:  The Story of Alexander Selkirk, alias Robinson Crusoe

Almost two hours after we leave the small city, our guide welcomes us to Selkirk’s lookout. Located 565 meters above the sea, from it you can see the island’s entire topography and a fisheye view of the ocean. They say that each day for 4 years and 4 months, a forgotten Scottish sailor would climb up to this post to see if his isolation was about to end. Today there is a large plaque that tells about the island’s most famous visitor: Alexander Selkirk .

In 1704, Selkirk was just another crewmember on the famed English pirate ship Dampier, which sought to attack the Manila galleon, a Spanish ship that transported mythical treasures. Following a dispute between Selkirk and Stradling, a ship’s officer, while they were on the archipelago, the former decided to maroon the sailor on the island. It was a cruel punishment, even more so because, as legend tells, Selkirk was left with just a Bible, a knife, a hatchet and a provision of food and tobacco.

Luck enabled him to survive on the food found on the island and by slaughtering goats. However, because of the barbarous ways he acquired due to his isolation and nonexistent contact with other humans, he had become practically unrecognizable by the time English vessels dropped anchor in Cumberland Bay, the island’s main anchoring point, 4 years and 4 months after his forced exile.

Once back in London, his story was made known and disseminated through various communications media, which engaged in speculations regarding the ex-islander’s way of life. The material produced by the press became the basis for the novelist Daniel Defoe’s famous book, “Robinson Crusoe”.  It was only in the 1960s when approval was obtained to christen the archipelago’s largest island with the name of Defoe’s fictional character.

From the highest point of the lookout one sees Cumberland Bay, the town of San Juan Bautista, Cerro Centinela mountain, and the island’s entire southeastern portion, which is uninhabited. The vista includes an astonishing view of Santa Clara, nestled between cliffs.

Juan Fernández National Park has the important mission of maintaining and preserving the unique natural surroundings in this island group, formed 3,000,000 years ago.  The archipelago is home to over 400 species of plants, though just one family is endemic to Robinson Crusoe Island – the flowering shrub known as Lactoridaceae. The cauliflower native to Juan Fernández, Dendrosolis litoralis, is another outstanding example of its flora. There are endangered varieties of Neriifolia and Pruinata. Other flora are the Chonta palm, naranjillo, canelo and Juan Fernández apple tree, michay, luma de más afuera, juan bueno, mayú monte, olivillo, madera dura and various climbing and arboreal ferns.

Around us nature coexists, seemingly in good health. Nevertheless, as Schiller (who has worked for CONAF, National Forestry Corporation) explains to us, Robinson Crusoe Island faces serious difficulties in trying to protect its valuable natural heritage. “We have a great many endemic species that have been reduced by the entry into the island ecosystem of foreign animals and plants. For example, the goats and rabbits have caused several problems, triggering strong erosion of the soil.”

The Pacific also has special reserves, including fish species of pampanito, cod, rock salmon, breca and vidriola. But its crustaceans are much more abundant. Lobster and golden crab have become Juan Fernández’es culinary icons.

Treasure No. 4: The Treasure

The island inhabitants have fascinating stories to tell. One of them has made Robinson Crusoe famous and even caused the arrival of a latest-generation robot in search of some clue that might point to the location of the famous treasure hidden on the island in 1741 by Lord George Anson.

It is said that the treasure consisted of 864 bags of gold, 21 barrels of precious gems and jewels, 200 gold bars, a rose of emeralds and gold two feet high, and 160 chests filled with gold and silver coins. Perhaps this is why, among the townsfolk, it is said that a detailed map of the treasure’s location is hidden, or that because of the ancient fortune’s fame, wealthy foreigners have come to excavate in different areas of the island, now followed by the “specially-designed” robot that never found anything.

Perhaps the treasure is somewhere else. Perhaps it is not material, nor of gold. Surely a good traveler will see that the true wealth of Robinson Crusoe Island is its people, its nature and its history.