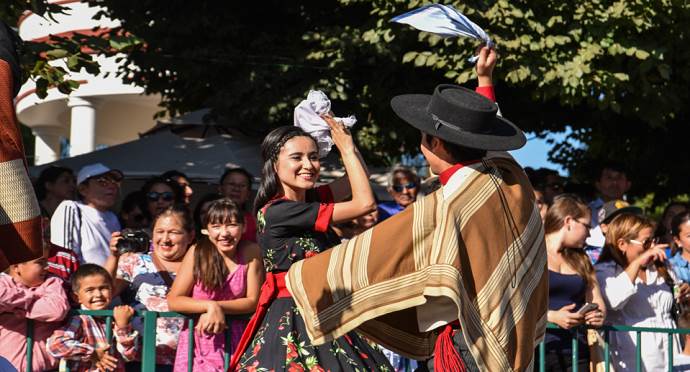 Festivals are a vibrant part of Chilean life from historical to religious, gastronomic to cultural. In fact, Chile itself is a festival – and everyone’s invited! Here are some of the most popular traditional celebrations.

At the Grape Harvest Festival in central Chile, a peasant couple crushes grapes underfoot to celebrate the wonder of Chilean wine. In northern Chile’s Fiesta de la Tirana, the sun’s rays glisten on the colorful costumes, instruments and masks of dancers performing the carnivalesque dance of diablada. Easter Island‘s Tapati Festival is playful and magical, while at the Cuasimodo festival in central Chile a priest brings the Holy Communion to the sick, escorted by bandana-wearing horsemen. In Chiloé, people hold mingas, gathering in group labor to celebrate a neighbor building a house or moving in.

There is always a reason to be festive, each productive sector has one in different dates and places. The celebration of the corn, the cherry, the chicha or the festival of the watermelon, are joined by gastronomic celebrations that revolve around sea and earth products, popular games and songs.

Chile has a great variety of celebrations, religious or not, but there is one main holiday: Fiestas Patrias. Chile’s annual national celebration of independence. The date is commemorated to the rhythm of the national dance, the cueca, red wine, chicha and delicious empanadas.

Hundreds of thousands of people throughout Chile take part in this event, and tourists visit the country from all over the world.

On mystical Easter Island, each February the Tapati party sees painted bodies become art. A queen is chosen for the festival from amongst the young people, who compete for the honor in swimming and canoeing competitions using small boats and rafts made of totora reeds. The teams prepare traditional costumes, songs and dances, and share the stories of myths and legends in oral narrations. Physical skill is also put to the test in the Haka Pei competition, in which the most daring young men hurl themselves at great speed down a mountain, tobogganing over banana tree trunks. Body painting, called Takona, is the festival’s main characteristic, where the islanders paint their bodies with symbols of their mythic origins using natural pigments.

Also celebrated in February, in San Miguel de Azapa, Putre and Socoroma, is the Carnavalón festival, which is held to symbolically resurrect Ño Carnavalón, an ancient symbol of joy, fertility and fortune that attracts thousands of people each year from the Chilean high plateau or altiplano. It’s a traditional Hispanic-Amerindian festival, celebrated 40 days before Lent, that resurrects this mytical character which brings happiness for the whole year. It is also a greeting to Pachamama (Mother Earth) and to Tata Inti (Father Sun) with music, dancing, and local fruits, in a promise of abundance.

There are more festivals in February. In southern Chile, the region of lakes, rivers and thousand-year-old forests, celebrate the founding of the city of Valdivia. “On the Calle-Calle River the moon is dancing,” goes a local song that praises the beauty of its nature. To celebrate the event, which occured on February 9 of 1552, dozens of vessels make the river come to life, captivating the locals and the visitors from all over Chile and abroad. The garlanded ships compete for the prize of most glamorous vessel of all, and are the perfect setting for crowning the Queen of All Rivers. A fireworks display closes the festival, while along the riverbank people enjoy street performances, food and beer, the latter a reminder of the cultural influence of the German immigrants who began to arrive in the region in the XIX century.

The prestige of Chilean wine is celebrated in a special way in the central zone. Preparations begin with the arrival of summer, and the festivities culminate during the final weeks of March. The Grape Harvest Festival of the city of Curicó is the oldest among all of them and starts with a religious ceremony that blesses the first batch of pulped grapes, and it’s followed by a parade. The Grape Harvest also chooses a Queen, who is weighed on a balance against bottles of wine while a contest is held between grape stompers. Each competing team stomps the grapes for ten minutes, until the fruit is converted into juice. Applause and cheers of encouragement follow the stompers’ energetic progress.

The indigenous peoples of Chile – the Aymara, Quechua, Rapa Nui and Mapuche people – follow their own ancestral calendar. For them the New Year begins with the winter solstice on the night of June 24. The harvest has ended and the earth must rest, prepare itself for the sowing of crops, and renew her fertility. It is a new cycle of life, and the indigenous cultures express their gratitude to Nature. The New Year festival of the Mapuche is one of the best known. It is called We Tripantu, which means “the sun’s new turn” or “the return of the sun.” It is celebrated in the rural regions of the south, in Temuco’s main square, and in Santiago on the Santa Lucía Hill (or Huelén Hill, its original name).

On June 29, fishermen, divers, shellfish catchers and overall people who work in the sea, celebrate San Pedro, their patron saint according to catholic believes. On a ship surrounded by small boats, the figure of the apostle receives prayers asking for abundance of fishes, good health and a peaceful sea. People from different cities and neighbouring countries also take part of this event. The event includes a mass followed by traditional dances. People offer sea products to tools as an offering. The saint is the protagonist of his party, travelling through the streets and shores. From the ocean you can hear the ships’ siren, as a way of paying their respects.

La Tirana is a small town in the northern Tarapaca Region, near the city of Iquique. But its annual festival, Fiesta de la Tirana, has acquired an importance that spreads far beyond the itself. It has become Chile’s most celebrated festival, visited by both local pilgrims and tourists. Between June 12 to 17 each year, dancers and musicians enact the diablada, the ‘dance of the devils’, a carnavalesque dance for exorcising demons. The dance troupe, wearing fearsome costumes and masks, move to the rhythm of drums and flutes, with the leader of the troupe setting the pace with toots on a whistle. while paying homage to the Virgen del Carmen, or ‘Our Lady of Mount Carmel’. Descendants of the Atacameño, Kunza, Aymara and other indigenous peoples arrive at the Virgin’s sanctuary in processions, making promises in exchange for blessings. Masses are performed in the church while in the surrounding area there are stalls with handicrafts and food, and dancing throughout the day.

Winter Carnivals in the South

The winter cold of the far south is brightened by the warmth of its festivals and carnivals. In July, the Fiesta de la Nieve or Snow Festival is held in Puerto Williams, the southernmost city in the world, where locals and tourists all take part. In the same month, in Punta Arenas, is the Winter Carnival. Parades and street bands circulate in the center of the city, local girls compete to win the scepter of the Carnival Queen, and fireworks light up the night sky along the Strait of Magellan

In Chile, the national holiday falls on September 18 and works as the anticipation of Spring
by open-air ramadas, shelters with roofs made of tree branches, and fondas, which have stands offering typical dishes, empanadas, chicha and red wine. Under the shelter of the ramadas people dance cueca, along with cumbias. Along with the commemoration of the First Assembly of the Government of 1810, on the 19th, every single branch of the military take part in a parade in different cities of the country. The Chilean flag is displayed on houses, children fly their kites and play with marbles and spinning tops. People hold hopscotch (rayuela) competitions and greased pole climbing contests (palo encebado). There are horse races, Chilean style; bareback, the rider holding onto the horse’s mane, along with many other traditional activities.

The copper, one of Chile’s greatest natural resource, is the protagonist of this religious occasion. Andacollo is a town located north of Coquimbo, and was a settlement of Molle people, who are related to the Incas. They developed agriculture and exploited the copper resources. In their native language of Quechua, “anta” means copper, and “coya” means monarch. This is why the Andacollo Virgen is known as the Queen of Copper. A widely-attended festival for both national and foreign tourists, held each year on 24th – 26th of December celebrated with dances and vows to the patron.

Every December 24th, Chile commemorates the birth of Christ with a family dinner, some “pan de pascua”, a cake filled with chunks of dried fruit, and “cola de mono”, a beverage that mixes spirits, milk, sugar, coffee and cinnamon. This holiday is especially dedicated to children, who receive gifts from Santa, known in Chile as “Viejito Pascuero”. Presents are placed under a Christmas tree hung with lights and ornaments that present to act as candles and snow, due to the European origin of the party. At the foot of the tree is a manger, as a representations of the coming of the catholic messiah.

January 1st is welcomed in Chile with spectacular firework displays through the different cities of the country. The most traditionals are those of Valparaiso, watched by thousands of people during midnight that seek out the best viewpoints on the different hills of the city. Both chileans and foreigners hug each other, drink champagne, exchange wishes for prosperity and many have their own rituals for New Year. Some people eat lentil dishes, some write down everything that was bad about the old year and burn it, there are those who go out walking with luggage, so they will travel during the year; and there are those who wear ‘lucky’ items.