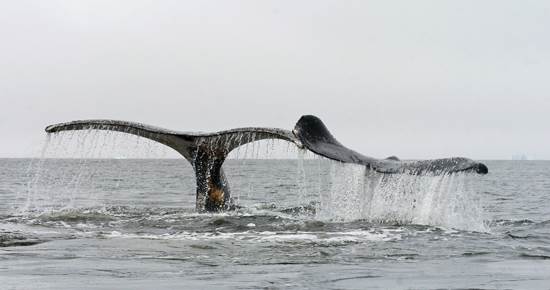 It is a friendly activity with the giants of the sea in the Chilean coastal waters, especially after the passing of a law declaring the coastline a whale hunting-free zone.

The blue whale weighs over 100 tons. Its young consumes approximately 350 liters of milk per day. On this basic diet, a whale calf can gain around 100 kg daily. The animal, larger than all the dinosaurs that once inhabited Earth, swims safely in Chile’s vast seas. Half of the 87 existing whale species in the world have been detected in Chile’s coastal waters.

Chile’s proximity to these animals yearly draws hundreds of tourists, who often travel across the world to contemplate these giants of the ocean in their habitat. «Most of the tourists who sign up for these packages come from Europe,» says Karen Wilson of Turismo Yámana.

The main attractions of “whale watching” – as it’s called in the tourist industry –  are blue whales and humpback whales, best observed between the months of December and April in the Strait of Magellan, off the southern tip of the American continent, where the Pacific and the Atlantic oceans meet.

Our guide explains that humpbacks are observed from the end of the year in Francisco Coloane Marine Park, the first feeding ground of humpback whales in South America. To see blue whales one must travel some 1,000 kilometers south of Santiago, to the areas where krill abounds, the preferred crustacean on this whale’s menu.

At the start of the three-day sea journey, tourists head out from the city of Punta Arenas toward the Strait of Magellan. On Carlos III Island, a well-equipped and comfortable campsite awaits them, where they will sleep for two nights. On the island they will also watch penguins, cormorants and seals.

Whale watching is an excursion that requires thorough preparation. Before embarking on the encounter, the tourist guides — many of whom are fishermen who know the sea like the palm of their hand — must locate, from the earliest hours of the day and from nearby lookouts, where the mammals are to be found.

Using powerful binoculars they sight the familiar plumes spouting out of the whales’ blowholes, and they must take advantage of their diving intervals of up to half an hour to cautiously approach them with the motors cut.

«Suddenly encountering a whale that dives then surfaces again is something that brings you indescribable feelings,» says Antonio Larrea, who has photographed these whales — especially their tails — for the scientific count of the whale population.