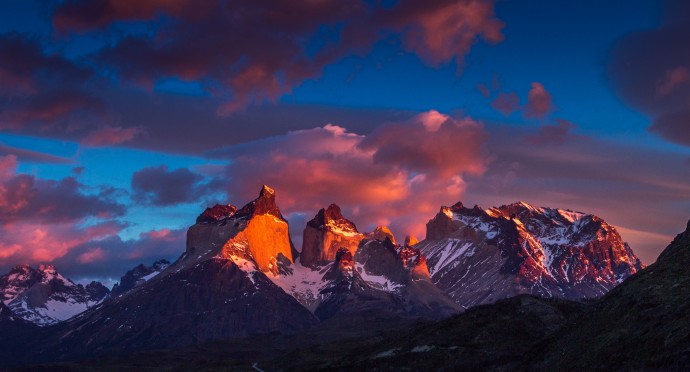 A few days ago, the Spanish newspaper prepared a guide for travelers, which included different Latin American touristic destinations from Argentina, Brazil and Uruguay. Chile appears twice in the list with Torres del Paine and the traditional bar La Piojera. Both are part of Chile’s identity as they make the country recognizable for foreigners. Learn more about these two destinations and some others that are part of Chile’s charm below.

Torres del Paine: Torres del Paine are located in the Magallanes and Antartica region and they were established as a unity on May 13th, 1959. The park is known worldwide for the mountain range that delineates it, which is made of granite that was modeled due to the force of glacial ice. In terms of the flora of the place, there are 274 species of plants that belong to the patagonian steppe, Magellan wood and Andean desert, among others. Besides the natural charm of the area, it is also possible to enjoy the protected fauna of the place, such as rheas, owls, pumas, red foxes and different kinds of reptiles.

La Piojera: In this bar, Chilean culture finds its maximum expression. In 1916, Mr. Carlos Benedetti Pini, originally from Italy, opened the restaurant Santiago Antiguo. Later, in 1922, Arturo Alessandri Palma, President of Chile at the time, visited the place and, outraged, called it “piojera” (place of lice). This anecdote led to the place being known as “La Piojera”, which became its official name 30 years later. It is a place filled with history that has welcomed the most varied visitors, from former presidents of Chile to common people. It offers is traditional Chilean cuisine, including pernil (Boiled whole pork hock ham), “arrollado” (pork roll, peasant style), roast meat and the famous drink “Terremoto” (Earthquake), made with pipeño (a wine made of ordinary grape stock), fernet or grenadine and pineapple ice-cream.

Valley of the Moon: This wonderful landscape in northern Chile stands out due to its rock formations, its dunes and its similarity to Mars. Also, the surroundings Valley of Death and the Sal Mountain Range stand out, along with an spectacular view of the Milky way at night. The Valley of the Moon is located less than 2 km away from San Pedro de Atacama, from where it is easily accessed. Most touristic deals also include trekking routes and sandboard expeditions, but one of the most attractive sights the valley offers are its sunsets, in which it is possible to see the sun set from its highest dune, where the color and shades that decorate the landscape can be appreciated.

Easter Island: This island is known as the world’s belly, and for that reason, it is shrouded by an aura of fascinating mystery. It is a National Park and Unesco named it heritage of humanity. It possesses different natural attractions: beaches, such as Ovahe and Anakena, volcanos and meadows to go all over, flora and fauna to discover diving, caverns and the majestic moais, which are one of the most characteristics attractions of the island. Due to the isolation of the place from other parts of the world, Easter Island developed a rich culture in terms of traditions, language, music, dance, among others; expressions that are present nowadays in each and everyone of its people. All of these traditions are celebrated in Tapati, the official festivity of the Rapa Nui people that takes places during the first two weeks of February. In it, the people from the island paint their bodies like their ancestors, compete in different challenges and choose their queen, who holds the title until the next festival.

Valparaíso: This is Chile’s most important port and it dates back to 1536. Its hills offer an infinity of multi colored houses that border the twisting streets of the city, which make it a maze full of narrow alleys, never ending stairs and viewpoints from where the whole city and bay of Valparaíso can be seen. In 2003, the Unesco named it World Heritage and one of its must-sees is the New Year’s fireworks show, carried out on December 31 and which lasts about 30 minutes.