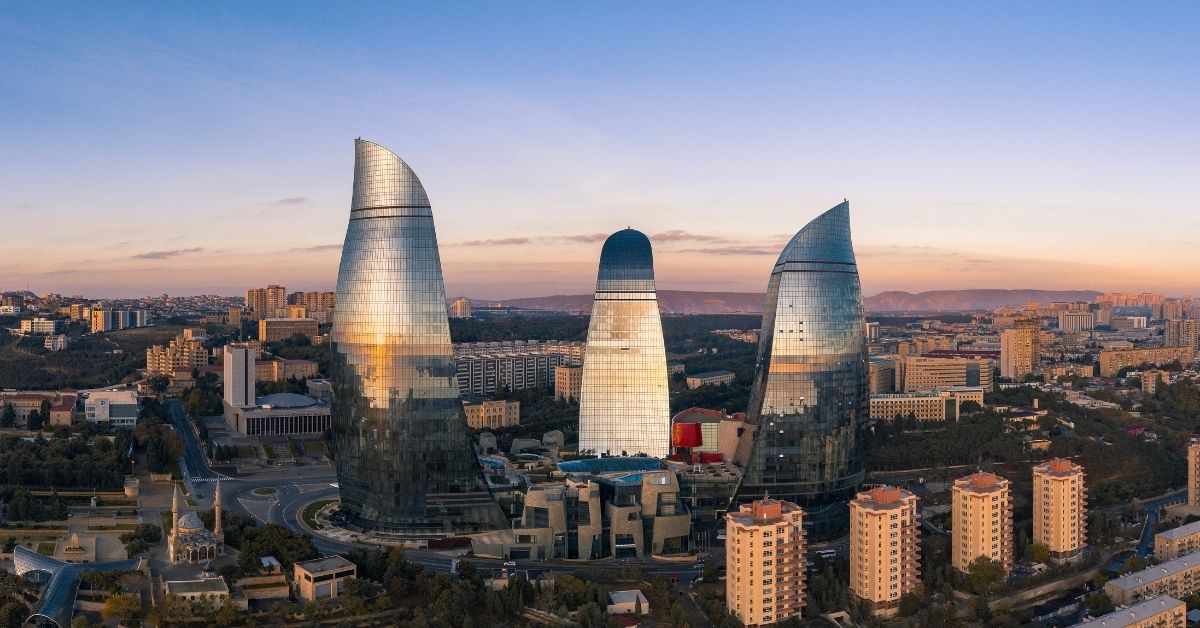 The capital city of Azerbaijan lies on the shores of the Caspian Sea and is a remarkable mix of old and new. The old city of Icheri Seher, the historical centre of Baku, dates back to the 12th century. It was the first site in Azerbaijan to be placed on the UNESCO World Heritage List. It contains various ancient architecture including the Palace of the Shirvanshahs, the Maiden Tower, minarets and bathhouses. The area of the old city is a wonderful place to explore, taking in the architecture and ancient streets. You’ll find plenty of bars and restaurants here as well as traditional carpet weavers and boutique shops selling unique handicrafts.

After you’ve taken in the beauty of the old town, learn about Azerbaijan by visiting the National History Museum. Baku’s largest museum is in a beautiful Renaissance style mansion and holds over 3000 artefacts showcasing Azerbaijan through the centuries. Other highlights include relaxing with a coffee in Fountain Square, walking through the main shopping district on Nizami Street and admiring the Baroque-style architecture of the Government House.

Visit the Palace of the Shirvanshahs

The Palace of the Shirvanshahs is worthy of its own mention. Nestled in the heart of the historic centre, the 15th century complex was built by the Shirvanshahs, rulers of Azerbaijan from the 9th century until the early 16th century. After its construction it served as a royal residence for around 200 years. The palace is considered a jewel of Azerbaijan architecture and is one of the most popular attractions in Baku.

As well as the main palace building itself, the complex contains tombs, a mosque with a minaret, the mausoleum of the dervish, Murad’s gate and remnants of a bath house. The best way to explore the palace is with a local guide who can fill you in with interesting facts about Azerbaijan’s history and the role this complex played. Moreover, the location of the palace means you have some of the best views of the city too. Definitely one of the top things to see in Azerbaijan!

The three giant skyscrapers, more commonly known as the Flame Towers, are the most recognisable site in Baku. While two of them are for private apartments and offices only, the third houses the Fairmont Hotel. You can visit to enjoy dinner and drinks with what might be the best view of the city.

The design of the flames is mirrored after Azerbaijan’s special relationship with fire, after all the country is known as The Land of Fire! The state emblem even has a red flame as its centrepiece. This concept dates back thousands of years, when flames were seen bursting from the mountains due to the country’s abundance of natural gas. This coincided with a time when people would generally worship natural elements and so Azerbaijan’s unique relationship with flames and fire was born.

The city of Sheki is located in northwestern Azerbaijan in the shadow of the southern Caucasus mountain range. Once a stop on the Silk Road due to its production of textiles and embroidery, the city is bursting with culture and tradition. It also has some of the most beautiful buildings in the Caucasus. A visit to the Summer Palace should be top of your list – it’s considered one of the most beautiful pieces of architecture in modern Azerbaijan. It was added to the UNESCO World Heritage List in 2019, making it the country’s most recent addition.

Constructed in 1763 for the ruling family of Sheki, the palace is modest in size but impressive in appearance. Found on a small hill which overlooks the city, the palace is enclosed in fortified walls. The second you enter the gates you’ll come face to face with the beauty and opulence of the decoration. Expect to see exquisite patterns and colours on every inch of the building. Other highlights of Sheki include exploring the old town and popping into quaint craft shops, visiting the Winter Palace and visiting the modest Museum of Folk and Applied Arts, located within the Three Saints Church.

Gobustan National Park is a great day trip from Baku and the perfect introduction to Azerbaijan’s fantastic landscapes and diversity. It is famous for its ancient rock art and carvings, as well as mud volcanoes. It’s a national historical landmark and protected area showcasing the best of Azerbaijan’s nature. The reserve has over 6,000 carvings which depict people, animals and rituals showcasing prehistoric life in the Caucasus region.

Booking a guided tour is the easiest way to reach the park while learning about the carvings and volcanoes. Mud volcanoes are very different to traditional volcanoes – only spewing mud, water and gases, which means they are not dangerous to visit. And while there are around 800 in the world, over 300 of them have been found in Azerbaijan! There are various mud volcanoes in and around Gobustan National Park including some that are dormant, however the most popular is the Goturdag Volcano which has been spurting mud for over 100 years and remains one of the most active in the area.

Another popular day trip from Baku is Yanar Dag. Translating to “burning mountain” the attraction is just that – a continuous fire caused by natural gases along the Absheron Peninsula. The flames burn slowly and steadily due to a very slow seep of gas from the subsurface of the porous sandstone layer. It’s debated for how long the fire has been continually burning, with some claiming it’s been up to 4,000 years. Marco Polo even wrote about the mysterious flames as he passed through the country in the 13th century!