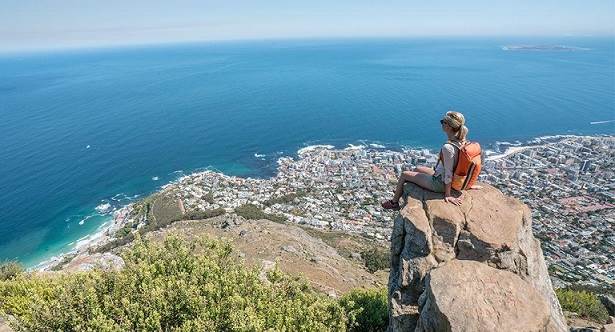 Often considered one of the most beautiful cities in Africa, Cape Town is surrounded by natural beauty, from the Atlantic coast to the verdant vineyards. We have put together our favourite things to see and do while visiting.

Cape Town is a dream come true for many travellers. Often referred to as South Africa’s Mother City, its beauty will far exceed your expectations with a larger than life spectacle of sea, mountains, and culture. As your feet touch down on this spectacular city, don’t miss a city tour for the best way through the rich historical sights and urban excitement buzzing around you.

Against the colossal backdrop of Table Mountain which never fails to impress, you can wonder among one of the most vibrant neighborhoods, Bo Kaap, once known as the Malay Quarter. In a melting pot of Malaysian, African, and Indian culture, the colourful architecture, food and music you see is deeply rooted to the area. Other highlights include the Castle of Good Hope – a 17th century bastion fort and the oldest surviving colonial building in South Africa and of course, Cape Town City Hall, where on 11 February 1990 Nelson Mandela first spoke after his release from prison.

If you are looking for a place to rest and relax after this insightful tour, the Company Gardens is one of the most beautiful green spaces in the heart of the city, not to mention the beaches of Camps Bay and Clifton are easily accessible.

One of the New 7 Wonders of the World, Table Mountain never fails to captivate first-time visitors. The shape of Table Mountain alone is one of the most iconic sights of South Africa with its distinctive flat top, spanning more than 3 kilometers. You can nod to close allies, the Devil’s Peak and Lion’s Head directly on either side of this monumental mountain. Whether it’s covered in a blanket of rolling clouds above, or lit up brightly against clear blue skies, it is a spectacular sight to watch from below and of course, above!

Hop aboard Table Mountain’s Lower Cableway Station, for a 5 minute revolving cable car ride to the top which will give you goosebumps, as you take in the expansive 360 degree views reaching the summit at 1,067 metres above sea level.  Remember to check in advance about the weather as the cableway doesn’t operate if the wind is too strong or visibility poor, so keep optimistic for a clear day!

At the top of Table Mountain, you will experience a sense of peace and serenity like never before. This special area is rich in biodiversity with hundreds of colourful floral species, attracting swarms of birds and insects to this natural haven. Have your camera ready for breath-taking views over Cape Town and the rugged coastline, looking out into Robben Island and the 12 Apostle Mountains in the distance. If you are very lucky, you might even spot the rare rooikat (caracal) – the biggest and last remaining wild cat. Notoriously shy, these felines still fiercely call Table Mountain their home.

No trip to South Africa is complete without visiting the historical Robben Island. Situated in Table Bay, Cape Town, this desolate island has a very different feel to the picture perfect beaches and cosmopolitan vibe which Cape Town is famous for. This isolated and once apartheid-era prison is now a museum and UNESCO World Heritage Site. The stark surroundings of wire fencing, watch towers and high walls bring home the incredible story of the late Nelson Mandela, the former South African president who spent 18 of his 27 years of imprisonment here with many other political prisoners.

A visit to Robben Island can be done in either the morning or afternoon. It includes a 30 minute catamaran ride to the island, as well as an approximately 45 minute bus tour on land. You’ll see the Lime Quarry where prisoners would work all day and pass the permanent village for island employees and their children. There was even a primary school.

Your final stop is the Maximum Security Prison. This part of your visit is guided by a genuine ex-political prisoner who will share their personal insights. The walk through the prison is both memorable and chilling. You’ll visit the 8-foot by 7-foot concrete cell of Nelson Mandela and listen to the powerful interpretations of his life in prison. Returning to Cape Town by catamaran, you are left with a compelling feeling of the courage and sacrifice made by Mandela and the people who defeated apartheid in South Africa.

A day trip from Cape Town city to the Southernmost tip of the Cape Peninsula should be high on your South Africa bucket list. You’ll be driven to Cape Point, along the Atlantic coast which is simply breathtaking, especially when you travel down Chapman’s Peak Drive – one of the most famous driving routes in the world. This road features fantastic twists and turns, along vertical sea cliffs and with the formidable 12 Apostles Peaks in the background, you’ll feel like you’re starring in your own episode of Top Gear!

There is a plethora of things to do and see on the way to Cape Point – although the remarkable scenery and continuous spray of colour, from the flora and fauna is satisfying enough. You’ll visit the pretty fishing harbour of Hout Bay and stop for a fresh seafood lunch, before driving onto the Cape of Good Hope Nature Reserve and Cape Point.

This area is home to many species of buck and birds, the Cape Mountain Zebra, and some mischievous baboons. Enjoy sweeping views of False Bay after this memorable day adventure. Returning to the sun setting over the tall peaks of Table Mountain, it is a fitting end to all the highlights the Cape has to offer.

For a moment, you might be mistaken for thinking you’ve landed in frosty Antarctica with penguins roaming freely on the beach. But with no icebergs in sight, this is just a normal day for the African Penguins of Boulders Beach in South Africa. It is an unusual but extra special sight to behold when you see over a thousand penguins basking in the sunshine and relaxing in the soft, white sand.

What started with just two breeding pairs of penguins in 1982 has grown to a colony of about 2200 in recent years. This is partly due to increased supply of pilchards and anchovies in False Bay where Boulders Bay is situated – an essential part of the penguins’ diet.

The ancient boulders and surrounding beaches form part of the Table Mountain National Park Marine Protected Area. This guarantees the beaches are clean and safe, and importantly, the penguins are protected. A wooden walkway has been established in recent years so you can view the African Penguins and their nesting and breeding sites on an intimate tour as you learn all about the endangered birds and their home. Have your camera at the ready, as this is the closest you will ever get to African Penguins!

After the endless exploration that Cape Town has to offer, what better way to unwind than with a chilled glass of one of South Africa’s famous grape blends, perhaps a Cabernet Sauvignon? The Cape Winelands tour is ideal for travelers looking for a packed day visiting a handful of the region’s best wineries with an experienced and local knowledgeable guide.

The picturesque village of Franschhoek is surrounded by magnificent mountains and vineyards. After a short drive through the town, your wine tasting will take place in, followed by a lunch stop and maybe a chance to try some of Franschhoek the fresh trout that Franschhoek is famous for.