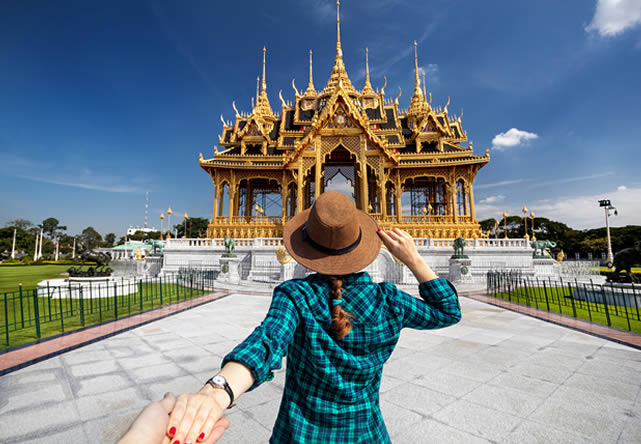 The city of Bangkok is a whirlwind of adventure. The minute you step off the plane, the subtropical southeast Asian heat will encompass you and the sounds and smells will leave you confused as to which direction to head in. While Bangkok is often used as a gateway to other countries in Southeast Asia, the city has plenty of attractions to keep you occupied for a few days. Here are our highlights of Bangkok.

The Grand Palace is one of the most opulent and fascinating places you will see in Thailand. Built in 1782, it was home to the Thai King and Royal court for over 150 years, right up until 1925. The palace complex encompasses over 200,000 square metres with various buildings, gardens, temples, courtyards and halls. While it is currently operating as a museum and attraction for the public, it does remain a place of work for several of the royal offices.

Everywhere you turn in the complex, the beauty and intricate detailing will amaze you. Take your time to look at the multi-coloured tiles that cover most of the surfaces and glisten in the sun. While the Grand Palace is almost always busy, chaotic and a little overwhelming, it’s definitely worth visiting. Do remember to dress conservatively – you will not be allowed in if you have shoulders or leg showing.

Located around a ten minute walk from the Grand Palace, Wat Pho is another highlight of the city and where you can see the sheer size of the famous Reclining Buddha. It was originally a university in Thailand, teaching religion, science and literature. It is now known as a public museum as well as a centre for traditional massage. The biggest attraction here is of course the reclining Buddha. The Buddha measures an incredible 46 metres and is covered in gold, making it quite a sight. You need to remove your shoes before entering the temple and we recommend dropping a few coins into the bronze bowls that line the wall. Not only is this thought to bring good luck, but it also goes into the preservation of the temple.

Wat Pho has a lot more to see than only the reclining Buddha and so definitely take some time to wander the complex. Check out the gold temples with beautiful tiling as well as the Chinese statues

If you want to escape some of the hustle and bustle of Bangkok and get some lovely city views, then head to Wat Saket, more commonly known as the Golden Mount. Built on a man-made hill, it dates as far back as the Ayutthaya Kingdom, which existed between 1350 and 1767 and served as a Buddhist temple. Once Bangkok became the capital in 1782, King Rama I renovated the temple. At the start of the climb, you’ll find lots of lush greenery, water features and a peaceful jungle vibe. You then climb the 300 stairs to reach the top where you have incredible views. If you feel an air of spookiness around you, it could be because Wat Saket was used to bury thousands of plague victims in the 18th century!

If you want to throw yourself into the chaos of Bangkok then visit the Chatuchak Weekend Market. Considered the most expansive market in the world, around 8,000 stalls welcome thousands of visitors each day to rummage through various goodies on offer. There isn’t much that you can’t find at this market! The lanes are numbered, however getting a little lost here is all part of the fun. Remember to wear loose and comfortable clothing since it gets very hot, a bag to carry your purchases and plenty of cash as vendors don’t accept cards.

Wat Arun is another must see temple on your visit to Bangkok. Also located on the banks of the Chao Phraya River, but on the opposite side to the Grand Palace and Wat Pho, the temple is considered one of the most beautiful in Thailand. It is also known as the Temple of Dawn, which relates to the time of day that King Taksin arrived at the temple after fighting the Burmese army who were invading Ayutthaya. He was supposedly so impressed with it that he renovated it into what it is today. You can hop on a small shuttle boat that takes you to the other side of the river for as little as 3 baht.

The Bangkok National Museum is a fascinating visit for anyone interested in history. It houses the largest collection of Thai artefacts in the country. It’s located a short walk from the Grand Palace so if you are in the area, stop off for a few lessons on Thai history. You can see ancient ceramics and stones, clothing items, old weapons and many more treasures – not to mention the architecture and grounds are very beautiful too.

Bangkok can be overwhelming, there is no doubt about it. Between the heat, the crowds, the tourists and the chaotic traffic, it’s normal to want to escape the city for a while and re-wind. This is where Lumpini Park comes in! It was created in the early 1900’s and was originally designed to be an exhibition centre for Thai crafts, but as this never happened, it has grown into a tranquil oasis for Bangkokians who need a slice of nature in one of the busiest cities in the world. It’s easy to spend a day here watching locals practise thai chi, relaxing with friends or simply watching the world go by. Look out for a gentle reptiles that are often seen strolling between the lake and bushes!

Terminal 21 is a great place to explore if you find yourself in the Sukhumvit area. The large shopping mall is modelled after an airport, with each floor representing a different destination. Find beautiful Roman statues on one, unique Japanese fashion on another and all things British on the next. The ground floor houses a huge food court where you can pick up all sorts of delights and the best part? It’s fully air-conditioned and a welcome break from the Bangkok heat.