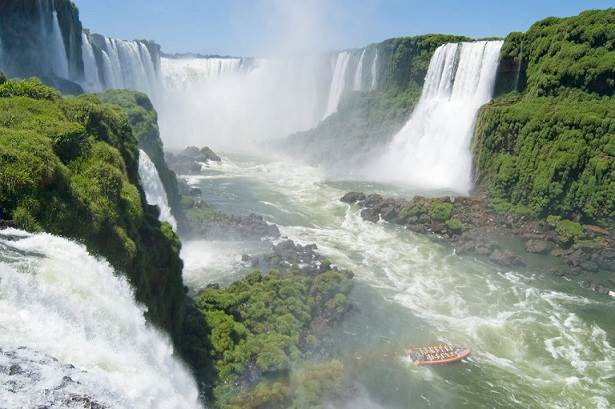 Argentina has one of the most diverse landscapes in the world. The variety of national parks peppered across the country is astounding. From the trekker’s paradise of Tierra del Fuego to the drifting serenity of the Ibera Wetlands. Glaciers, towering rock formations, mountains, ice-fields, rainforests, sparkling lakes, barren deserts and some of the most magnificent waterfalls in the world. Argentina is a paradise of natural beauty and the holy grail for the adventurous explorer. Here’s our pick of the top 8 national parks in Argentina.

One of the most impressive sights in the world, Iguazu Falls receives over two million visitors a year. Surrounded by subtropical jungle is a network of 275 waterfalls plunging over 260 feet into the Amazonian river below. Best seen from the viewing point at the end of the wooden boardwalk, this remarkable national park straddles the border between Argentina and Brazil. As well as waterfalls, Iguazu is home to a vibrant collection of flora teeming with wildlife. Keep a lookout for jaguars, tapirs, anteaters, ocelots, coatis and tufted capuchin monkeys.

The largest national park in Argentina, Los Glaciares National Park is always a highlight on a tour to Argentina. Located in southern Patagonia, in the Austral Andes of Argentina, lies one giant icecap and 47 glaciers. Explore the abundance of crystal clear lakes, ice fields, dark forests and wild rivers. Witness the eery cracking of the Perito Moreno Glacier and hike to Mount Fitz Roy. Keep a look-out for pumas, guanacos, rheas, condors and black-chested buzzard eagles.

The oldest dinosaur species to ever have been discovered came from Argentina.

Located in northern Argentina, the Ibera Wetlands covers over 3 million acres, making it the second-largest freshwater reservoir in the world. A vast landscape consisting of swamps, bogs, lagoons and waterways is home to an abundance of wildlife. These marsh wetlands are also home to a unique set of flora. Spot marsh deer, birds and alligators as you float down the lazy rivers giving in to the slower pace of life.

Located in southern Argentina, the hiker’s paradise of Tierra del Fuego peers out over the edge of the world. As the last embarkment point for Antarctica, the ‘Land of Fire’ is one of the most unique places in Argentina. Crashing glaciers, forests of sturdy, native trees, dramatic coastlines, snowy mountains, majestic peaks and powerful waterfalls. Tierra del Fuego is crawling with unusual animals such as the guanaco, austral parakeets, condors, king penguins, owls and fire crown hummingbirds.

The beautiful Valdes Peninsula Nature Eeserve is one of the most famous UNESCO World Heritage Sites in Argentina. It’s a magnet for wildlife lovers, eager to walk alongside the Magellanic penguins, spotting colonies of sea lions covering the shore. The exuberant landscape is fringed with towering cliffs sheltering the patches of coastline. Valdes is also an excellent place for whale watching.

The stunning Nahuel Huapi National Park covers an astonishing 2 million acres of Argentina’s landscape, making it a popular hiking destination. Resting in the foothills of the Patagonian Andes, Nahuel Huapi is comprised of endless lakes, snow-dusted peaks, crashing waterfalls and Valdivian rainforest. Being the oldest national park in Argentina, it’s intense beauty has withstood the test of time as it remains one of the most photogenic places in the country. If you’re lucky, you might spot river otters, cougars, Magellanic woodpeckers and huemuls.

Like a humbler version of the Grand Canyon, Talampaya National Park is a fantastic place for anyone looking to get off the beaten track. Still relatively unknown to tourists, this impressive national park consists of arid, rose-coloured rock adorned with fascinating, ancient petroglyphs. Dinosaur fossils, indigenous ruins and ancient remains are continually being unearthed, making it one of the most important archaeological sites in South America.

Los Cardones National Park in the Salta region is quickly becoming a hot spot for tourists. The barren planes are the perfect place to experience the quintessential, desert life of Argentina. Discover dinosaur fossils, tracks and incredible geological formations as scuttling lizards creep around the fields of cacti. Highlights include hiking one of the many trails winding through the park, stopping to take in the picturesque site – Valle Encantado.