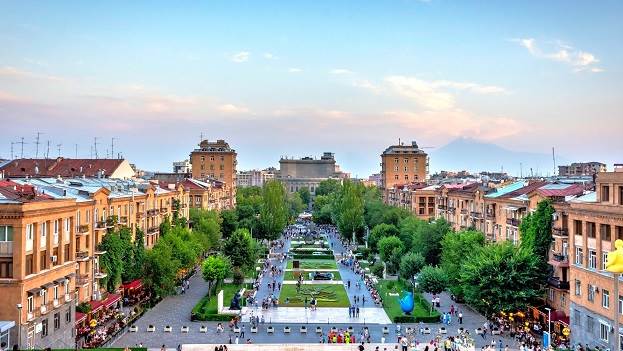 Drenched in history and rolling countryside, Armenia is considered one of the best kept secrets in Europe/western Asia. Positioned in the Caucasus region bordering Turkey, Azerbaijan, Georgia and Iran, the modestly sized country has a lot to offer the intrepid traveller. Centuries old monasteries sit amidst the verdant countryside, while the impressive Lake Sevan takes the title of the largest body of water in the whole of the Caucasus. The capital city of Yerevan is shrouded in tradition yet the modern facade shows Armenia’s continuous development into the 21st century. Whether you enjoy hiking through stunning countryside, learning about the vast history of the world’s oldest nations or tasting delicious food, a holiday to Armenia won’t disappoint. A fantastic place to start on your adventure is in the capital city, so we have compiled the top 5 things to do in Yerevan.

Republic Square, known locally as Hraparak is the central area of Yerevan, consisting of a roundabout, fountain and many of the city’s popular buildings. Most of the square was completed by the 1950’s and throughout recent history it’s been the main site for many demonstrations and protests. During the Soviet era, a statue of Lenin was erected in the square and Soviet celebrations were a regular occurrence. Since the independence of Armenia in 1991, this statue has been removed and the square was officially renamed to Republic Square. Due to various events, celebrations and protests taking place here over the years the square holds a great deal of importance for Yerevan. Within the square you’ll find a number of attractions including the History Museum, National Gallery, Government House and the 5-star Armenia Marriott Hotel – all of which have fascinating architecture. You can also view the musical fountain or enjoy a sit down in one of the many coffee shops or cafes. Overall a fantastic place to start your exploration of Yerevan and the perfect spot to relax on a sunny day simply enjoying the atmosphere.

The Armenian Genocide was the atrocious act of mass murder of over one million Armenians from the years 1915 to 1923, carried out by the Ottoman government. While the exact number of deaths is debated by Turkey, the act has cast a dark shadow on the history of Armenia. When visiting a new country, it’s always important to educate yourself on past events so that you gain a deeper understanding and appreciation of the country and its people. Therefore you should visit the Armenian Genocide Memorial Complex where visitors can pay their respects. It includes 12 concrete slabs that represent the provinces that now fall within Turkey, as well as an eternal flame to pay tribute to those who lost their lives.

Visit the Cascade Stairway and Museum

The impressive Cascade is an eight-level stairway that connects the Kentron and Monument neighbourhoods. After being constructed during the Soviet period, it was completely renovated in 2009 and is now one of the most popular places to visit in the city – especially for the fantastic views you get from the top! At the foot of the stairs, you’ll find a beautiful garden and sculptures by famous Colombian artist Botero – known for his exaggerated and humorous depictions of people. Inside the Cascade is the Cafesjian Museum of Art which exhibits various art and designs from Armenian artists.

Explore Kond – the oldest part of the city

Yerevan doesn’t actually have an Old City in the same sense that many ancient cities do. When Republic Square was originally built, it was an area of the old town that was flattened for the square to be constructed – therefore Yerevan’s old city technically lies beneath the central square. However, the neighbourhood of Kond wasn’t part of the renovations and still stands to this day- it’s therefore one of the oldest parts of the city today. Spend time wandering through the alleys and admiring the old architecture, many of which were originally built using clay and stones. Knowing that Yerevan is one of the oldest continually inhabited cities in the world makes the experience all the more enthralling.

Lake Sevan is the largest lake in the Caucasus region and covers approximately 5% of Armenia. It’s the perfect place to enjoy the country’s beautiful nature and experience the lush scenery without having to journey too far – it only takes around one hour by car from Yerevan! Most visitors come to Lake Sevan to experience the tranquillity and enjoy walks along the lake, relax on the beaches or swim in the water on a hot day. It’s also the location of the remote and picturesque Sevanavank monastery. The complex consists of two churches which date back to around the 9th century. It’s been well preserved and due to magical lake views, the complex is one of the most visited places in Armenia.