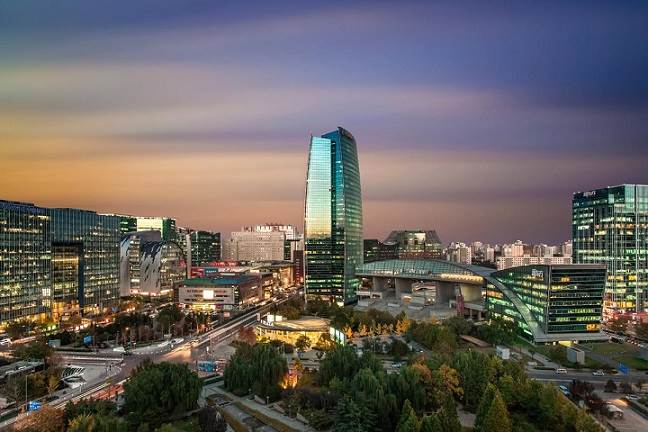 A lively metropolitan city where the nation’s deep history blends with a rapidly growing modern infrastructure, Beijing has something for everyone. The city’s contradictory character sees chaotic city streets meet peaceful ancient temples and tranquil pockets of greenery sit amongst the surrounding concrete jungle. Within the hectic nature of Beijing lie intricate reminders of the poetic past that set the foundations for the world’s largest capital. Here are some of our highlights for anyone considering a visit to Beijing.

Perhaps the most iconic site housed by Beijing’s bustling city streets, the Forbidden City’s grounds are home to an astonishing 980 buildings, each boasting the delicate detail and vibrant colour associated with ancient Chinese architecture. Used as the Chinese imperial palace for almost 500 years during the Ming and Qing dynasties, the Forbidden City is steeped in history and was declared a UNESCO World Heritage Site in 1987. The site now contains the famous Palace Museum, which has a wide array of Chinese art on display, offering visitors the opportunity to delve into the nation’s rich history. Climbing the hill in neighbouring Jingshan Park presents a spectacular aerial view of all the buildings on the site.

Located directly opposite the Forbidden City in the centre of Beijing, Tiananmen Square is amongst the largest squares in the world and the location of some of China’s most significant historical events. Originally built during the Ming dynasty, the square was the location of Mao Zedong’s proclamation of the People’s Republic of China in 1949 and has since become heavily associated with the infamous atrocities carried out during the protests of 1989. The gigantic, awe inspiring site acts as a window into China’s ever-shifting past.

Given that Buddhism and Taoism are the primary religions of China’s people, it should come as no surprise that the nation’s capital is home to some of the more spectacular temples on the planet. Perhaps the most noteworthy is the Temple of Heaven, a stunning building complex whose significance is reflected by the annual ceremonial visits from the Emperors of both the Ming and Qing dynasties. Other noteworthy temples include the resplendent, Tibetan-influenced Lama Temple and the truly ancient Tanzhe Temple, which was constructed around 1,700 years ago.

Offering a tranquil escape from the chaos of Beijing’s city streets, the Summer Palace consists of a tranquil collection of pagodas and palaces nestled amongst the lush greenery of Longevity Hill. This quiet getaway is found in the city’s northwestern corner next to Kunming Lake, a beautiful man-made body of water created during the 12th Century. The Summer Palace is the perfect location for a casual stroll whilst you absorb the area’s surrounding nature and colourful history.

The opportunity to try Beijing’s exotic and often eclectic street food is something that no visitor should ever turn down. From the city’s iconic roasted Peking duck and steamed dumplings to the more adventurous dishes such as fried insects, there is something to satisfy and excite the taste buds of any hungry traveller. The Wangfujing and Nanluoguxiang street markets are among Beijing’s more notorious foodie sites, both offering a vast array of both local and national delicacies.

Originally the site of a collection of industrial buildings constructed during the reign of Mao Zudong, the area is now home to the work of some of Beijing’s contemporary artists. Having made the shift from bleak, domineering factories to one of the most creative and contemporary areas in the capital, the 798 Art District is now a buzzing social hub of galleries, restaurants and bars. The area provides an intriguing blend of old and new that acts as an apt reflection of Beijing’s perpetual state of change. For a more peaceful experience visit the neighbouring Caochangdi art village.

In a fast developing industrial city it is often difficult to keep hold of the historical foundation on which the modern architecture now stands. However, Beijing’s hutongs provide the perfect antidote to the city’s rapidly growing contemporary skyscrapers. The quaint, narrow alleys that offer a great insight into life in old Beijing. Originally acting as the abodes of Beijing’s poorer population, the hutongs’ simplistic structures act as a contrast to the magnificent imperial buildings that have gained wider international renown. Next to the hutongs is Houhai Lake, where visitors can boat in the summer or skate in the winter.

Constructed for the 2008 Beijing Olympics, famous for its opening ceremony and the incredible performances of Usain Bolt, the Olympic Park still stands today. The instantly recognisable Bird’s Nest is a sight that will inspire, whether you are a sports enthusiast or not. The grounds of the Olympic Park also contain the vast Olympic Forest Park and the impressive National Aquatics Centre (or ‘Water Cube’). If you bring your swimsuit you can even take a dip for a small fee – the perfect escape from the sweltering heat of Beijing’s busy streets.

Whilst it may be located just outside Beijing, no trip to China is complete without a visit to the nation’s most recognisable ancient mega-structure. Located north of Beijing and spanning an astonishing 5,000 miles across the hills of eastern China, the Great Wall has to be seen to be believed. Given the sheer scale of the wall it can be difficult to decide which section to visit. The hike from Jinshanling to Simatai offers a good walk and constant breathtaking views, or for an alternative Great Wall experience visitors can toboggan down from the wall at Mutianyu. It is no surprise that it is considered amongst the most impressive feats of architecture in human history.

Much like most Asian nations, China has an abundance of markets to dive into and explore. From curious trinkets in the Panjiayuan Antique Market to the dazzling colours of the Silk Market, Beijing’s market scene is sure to quench the thirst of anyone looking to haggle for the bargain of the century or simply immerse themselves in the chaotic charm of the nation’s capital.