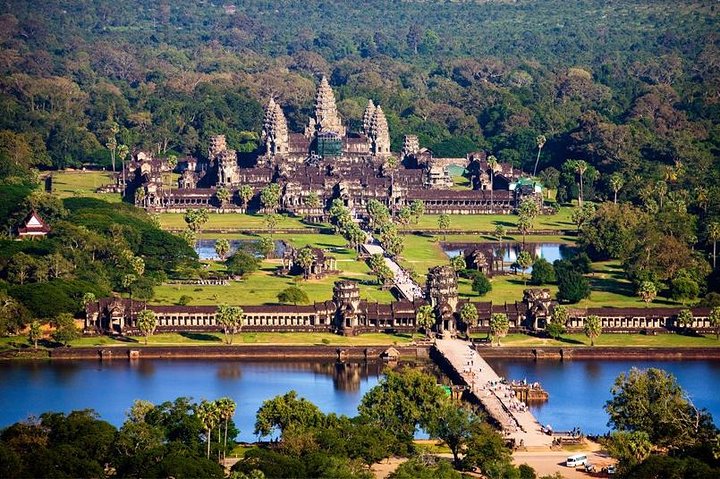 While Angkor Wat is without a doubt the most famous temple in Cambodia, there are plenty others that deserve just as much attention! Temples are scattered throughout the country and offer a fantastic glimpse into Cambodia’s long history. Skip the queues and enjoy a peaceful stroll around the many other less discovered temples of Cambodia.

Naturally, let’s start with the mother of all temples, the impressive and world famous Angkor Wat. The star attraction is a must see for anyone visiting Cambodia and hoards of tourists line up in the early hours eager to catch the sunrise. The complex is one of the largest in the world and while it was originally constructed as a Hindu temple, it later transformed to a Buddhist temple in the 12th century. The stone sculptures, intricate carvings and beautiful detail is breathtaking and it’s pretty obvious why this jewel of Cambodia attracts so many visitors every year.

Also located in the complex of Angkor, Bayon is known for the massive stone faces carved into the side. The temple is a lot more compact and you will come across some tight passages in order to explore it in depth, but the unique carvings really are worth it. Bayon stands amongst the trees, with no outer wall or city gates and the rich decoration of the many faces make it one of the most unique and interesting sites in Cambodia.

Comprised of beautiful stone carvings, Banteay Srei dates back to the 10th century. The Hindu temple is dedicated to Shiva, one of the three gods in the Hindu triumvirate. The pink hue of the sandstone gives the temple a unique image and makes it perfect for photographers. While the temple is around 45 minutes from Siem Reap, it is well worth it for astonishing stone work.

Angkor Thom was the last great capital of the Khmer empire, and one of the most visited in the Angkor complex. It houses the Bayon temple and has an old fortified city spread out in various areas, with five different entrance gates. One of the highlights is known as the “Terrace of Elephants” which is an impressive 350 metres in length and is said to depict a famous battle in Khmer history.

Built in the 12th century, Preah Khan served as a shrine for followers of both Hinduism and Buddhism. The complex is surrounded by a moat and has trees and shrubbery growing amongst the ruins. Built by Jayavarman VII to honour his father, it is one of the largest complexes at Angkor and combines beautiful carvings, stonework and crumbling ruins. As it is largely unpreserved, trees and vines have grown throughout the buildings and simply add to its charm.

Pre Rup served as the king’s state temple and was built in 961. Standing in the Angkor complex, the temple is made entirely of brick and sandstone which makes it best seen at sunrise or sunset. Detailed carvings can be seen on some of the towers however over time most have eroded in the rain. Pre Rup’s unassuming and worn appearance is all part of the charm and it is a fantastic temple to explore.

Located roughly 12 kilometres from Siem Reap, Phnom Krom temple sits on top of a hill shrouded by local legend. The shrine is dedicated to Hindu gods Shiva, Vishnu and Brahma with the temple dating back as far as the 9th century. The climb to the top can be steep however you are rewarded with spectacular views of the nearby villages on the way, passing the odd mountain goat and water buffalo.

Considered one of the most interesting temples, Beng Mealea is reached from Siem Reap and is popular amongst adventure travellers. The complex, which lays in ruins and is consumed by the jungle, is very much unpreserved and visitors can scramble over the rubble to explore the area.

For some peace and quiet, head to the temple of Koh Ker. Accessed on a day trip from Siem Reap, Koh Ker is one of the most remote complexes in the area and is almost hidden in heavy foliage and consumed by nature. Around two dozen of the monuments can still be seen by visitors while the rest are hidden in forest, and chances are you will find yourself alone when exploring the city’s remaining remples.

Located within the Angkor complex, Ta Prohm has been beautifully engulfed by the jungle that surrounds it and has been largely unchanged since it was first discovered. Vines evocatively rest over the ruins, while giant tree roots sprawl along the ground, providing some amazing photo opportunities for visitors to the site. Thanks to the Sanskrit stone inscriptions, a lot is known about the history of the temple and ruins, which largely date back to the 12th century. If you are visiting the Angkor complex, Ta Prohm is not to be missed!