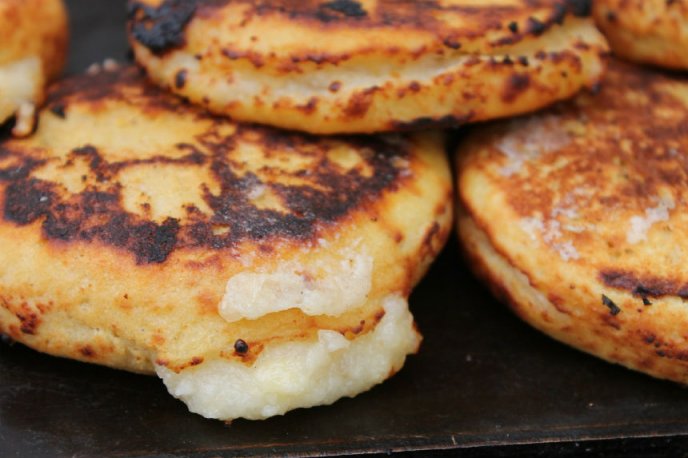 Colombia probably stirs up images of pristine Caribbean beaches and colourful colonial cities. Colombia also has a rich and diverse gastronomic scene, characterised by large hearty meals, made with fresh ingredients and lots of meat! Colombian cuisine is extremely diverse, thanks to the range of climates from each region. It also boasts a melting pot of different immigrant and indigenous populations which is translated into the cooking.

Here you’ll find our top 10 Colombian dishes that we have found from travelling around this country!

First and foremost is the Colombian national dish, the Bandeja Paisa. Popular with both Cafeteros (Colombians are knicknamed ‘coffee-growers’ due to the country’s worldwide prominence in this product) and tourists alike, the Bandeja Paisa is a huge food platter. It consists of grilled steak, fried pork rind and chorizo sausage on a bed of white rice and beans, all topped with a fried egg, and served with a sliced avocado and some fried plantain. It is absolutely delicious and will leave you full for hours!

This flatbread made from cornmeal is the basic side-dish to accompany any Colombian meal. It is normally eaten with an adornment of butter, although sometimes corn is added, then sprinkled with shredded hard white cheese. Yummy! Try the Arepa e Huevo, which will include a bit of egg inside and is more fried and compact than the normal arepa.

A typical hearty Colombian meal, this dish is a huge platter of grilled meat such as chicken, beef and pork, with some fried plantain thrown in for good measure . No knives or forks are needed when eating this Colombian speciality – you’ll be given some toothpicks and you’ll use these to pick up the huge chunks of meat.

Found in many South American countries, these are popular ball-shaped fritters that are eaten as a snack. The Colombian version is made with white cheese, and is fried until golden brown. You can find these at pretty much every cafeteria in the country for $0.50.

Popular all over South America, empanadas are stuffed pastries that can either be sweet or savoury. Typical Colombian empanadas are filled with beef, chicken or cheese, as well as with rice and coriander. They are fried, whereas the Chilean or Argentinean versions are often baked. But as seems to be a worldwide rule, the more unhealthy it is, the better the taste!

Green plantain is a savoury type of banana that is popular all over Latin America. For Patacones, it is squashed into thick pancakes, then deep fried in vegetable oil until golden brown.

Very common in and around Cali, this local speciality is a type of bread that is made from corn flour, cheese and eggs. It is often eaten warm and fresh from the oven.

This common dish is a delicious hot stew consisting of meat, plantain, cassava (a root plant used in cooking all over Latin America), coriander, sweetcorn and potatoes. On the Caribbean coast, fish is sometimes used instead of chicken, beef or pork. The exact ingredients will often vary according to the region of the country you find yourself in, but whatever variation you end up trying, you won’t be disappointed.

This is cooked corn dough filled with meat and vegetables, all wrapped up in banana leaves. The Tamales Tolimenses, which are famous in the Tolima region, are filled with pork, chicken, rice, potatoes, peas and a variation of spices.

Now this is a delicious crossover between dessert, fruit cocktail and a drink. It is a mixture of crushed ice, fresh fruit, condensed milk, shredded coconut and blackberry syrup, combined together and topped off with a cherry. It makes a great dessert to enjoy as you wander Colombia’s beautiful colonial streets after dinner, or as a snack to be enjoyed on the beach.