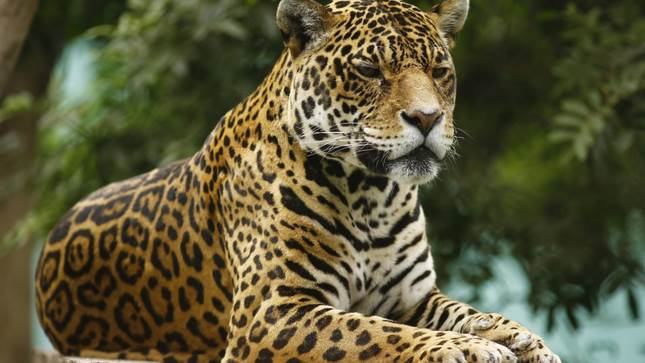 Once upon a time jaguars roamed from the United States down through Central and South America. It is now estimated there are only 15,000 jaguars left in the world and they are hidden deep in the jungles of South America. No visit to Peru would be complete without visiting the Amazon Jungle. You never know – you may spot this elusive cat.

Endemic to Peru, the Yellow-tailed Wooly monkey is a rare primate found in the cloud forests of the Andes. Deforestation has caused a huge impact to survival of woolly monkeys however there are a number of conservation efforts in Peru to protect them including some national parks, like the Rio Abiseo which are not open to tourism.

Also known as the pink river dolphin, it is found in freshwater of the Amazon Jungle although they are found across many of the basins in South America. Adults have a distinctive pink colour, different from their oceanic cousins.

Part of the vulture family, Andean condors are the largest birds in the world that are able to fly. They tend to live in windy areas where they use the current to help their heavy weight soar. Take a trip to the vast Colca Canyon, for epic views as well as the chance to view these iconic birds mid-flight!

The Peruvian hairless dog also known as the Peruvian Inca Orchid dates back from pre-Inca times as well as being a notable animal during the Inca reign. It is the national dog of Peru when it was declared as such in 2001. Due to their unique appearance, they are quite rare so it is unlikely you will see on a walk through Lima or Cusco.

The largest species of caiman, the black caiman is found in the Amazon Jungle rivers and lakes. Many tours of the Amazon Jungle include a nighttime boat ride when the caimans are more active. Your guide will point them out to you using a torch. Spot their eyes glinting in the darkness!

Arguably the most iconic creatures that speckle Peruvian landscapes, you can’t miss seeing llamas and alpacas whilst on a trip to Peru. Although they look similar, alpacas tend to have shorter ears and are much more woolly. Llamas tend to be taller and are known as the “Ship of the Andes” for their ability to carry weight on their back.

The Spectacled bear is the only bear species found in South America and are found living high up in the Andes Mountains. They were the inspiration behind the fictional Paddington the Bear books by Michael Bond where the hero came from “deepest, darkest Peru.”

The vibrant macaw is a symbol of the Amazon Jungle. Head to the clay licks on the riverbanks in the Amazon basin and you may be lucky enough to see hundreds of colourful parrots like the macaw coming to gather clay. It is a fantastic display of colour and sound which is not to be missed!