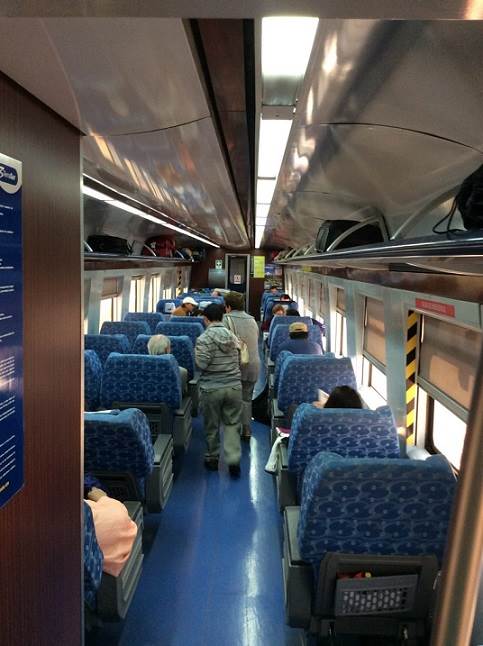 By avoiding the chaotic motorways, you will be able to embrace the exquisite scenery Chile has to offer Southerm Santiago with Terrasur.

TALCA — I wanted to do something different, so I thought I would give trains in Chile a try and visit Talca with my family. We bought our tickets from office no. 10 at the metro station Universidad de Chile but there are also other sales outlets too. The formerly grand Estacion Central is also a metro stop and so easy to access. It’s also worth arriving early to take photos of the façade.

Outbound we travelled ‘clase preferente‘ (business class) and had huge comfortable reclinable seats. We travelled back in economy which was in fact absolutely fine if you don’t mind that the seats weren’t reclinable. However, each seat has its own arm rest and a table.

Whichever class of travel you opt for, the trains’ interiors are spotlessly clean and efficiently managed, but on both days we travelled the windows were dirty and that affected the quality of any “filming” with the iPad.

When leaving the Estacion Central, the first thing you see are sevral rusty old trains languishing in the sunshine. Travelling South out of Santiago all you see is just an industrial landscape; we watched the small holders bringing their produce to the central market Valledor on their pick up trucks. The pace is quite slow until San Bernardo.

After that we picked up speed and saw the large-scale plantations of tOmatoes, maize, spring onions, apples, grapes and more. Passing through Rengo, Pelequen, San Fernando and Curico we all agreed that you get a far better feel for the countryside in the heartland of Chile from the train than from the Panamerican Highway.

We passed endless vines, admiring the Cordillera de Los Andes on the left horizon and the Cordillera de la Costa on the right. After three comfortable hours we pulled into Talca and that was the journey’s end for us although we could have continued on to Chillan and taken the connecting bus to Concepcion.

Talca lies in the middle of farming country. Its climate is one of the best in Chile, hot and dry but green and fertile with irrigation from the mountains. It is possible to visit some of the many vineyards, both large and small in the region, but you will meet relatively few fellow tourists.

Picking itself up from the earthquake five years ago, times are hard for Talca, as being mostly focused on agriculture, it is highly dependent on the vagaries of market demands elsewhere. The farmers produce some of the best fruit and vegetables in the world, but have many worries. For example, the plans to inappropriate water laws. Some of the small vineyards are moving upwards in the wine industry by producing selected boutique wines, while others leave their grapes to rot on the vine rather than having to pay workers to pick then grapes, still make huge losses. Businesses are being run down in many vineyards. It has become more expensive to export food to places like Argentina. Other countries who regularly buy seeds are holding on to their stocks, so it’s a dilemma as to whether to produce any more at all right now.

It is certainly not all gloom and doom in this beautiful part of Chile and the farmers are used to the fact that each year there are the ups and downs and so they have learnt to adapt accordingly. We left Talca wishing it all the best for this year’s harvests and we look forward to returning soon.

PS. The return train jouney in economy class actually turned out better as it happened. The whingey children with their noisy electronic games from the outbound journey in ‘preferente‘ were nowhere to be seen or heard!