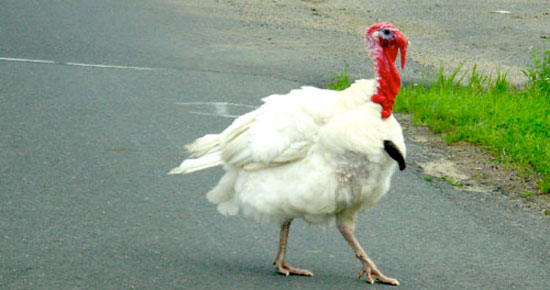 Quick and easy substitutes for a springtime Thanksgiving festival in the southern hemisphere, with fresh fruit and a glass of Chilean tinto.

There’s a lot to love about Thanksgiving – a holiday that only requires food, company and gratitude. For expats or travelers in Chile during November, you’ll be surprised how easily you adjust to the 80º weather and long days, but shopping for out-of-season ingredients – in Spanish – can be bewildering.

Here, skip the hard work and get creative with our tips and suggestions. Then, gather a few friends, stock up on some of Chile’s best bottles of wine or tastiest craft brews, and add a new Chilean twist to your Thanksgiving traditions.

Unless you’re staying in an exceptionally-outfitted hostel or eyeing a “sick day” on Thursday, baking a turkey (pavo) is probably out of the question. Can you live without turkey? Try one of the roast chickens (pollo asado) found in the deli section at most Chilean supermarkets or any of the “chicken and french fries” establishments that frequent most commercial areas.

If you cannot, however, live without turkey, the Park Lane Restaurant at the Hotel Santiago Park Plaza sells roast turkeys on the Wednesday before Thanksgiving and the day itself. Or, visit one of the expat-oriented bars in Santiago – like California Cantina, which offers a traditional Thanksgiving Day dinner with turkey and all the fixings.

Another alternative – especially attractive for the gravy lovers – is to buy a cut of turkey at a supermarket. Larger supermarket chains like Jumbo and Unimarc stock turkey breast and maybe even turkey drumsticks. Bake the turkey and use the drippings to make homemade gravy for the bird and stuffing.

Chile is one of the world’s leading producers of cranberries – just not in November. A quick and easy substitute are the bountiful Chilean blueberries coming into season just in time for Thanksgiving. Take your grandmother’s cranberry recipe and tweak the sugar amount to adjust for the sweet goodness of blueberries, and maybe add some orange juice for extra tartness. Look for blueberries (arándanos) in big supermarkets or outdoor markets in central Chile. Other in-season fruits that we’ve heard can substitute for cranberries: cherries (guinda or cereza) and strawberries (frutilla).

Of all the crazy substitutions you’ll be making at Thanksgiving, pumpkin pie is probably the easiest and most rewarding. The huge pumpkins found in most large outdoor markets make a great substitute for U.S. pie pumpkins (or canned pumpkin pie mix). Ask for a generous wedge or two, and be prepared to wince at the price – this is not the season for zapallo, as it’s commonly called in Chile. Chop the pumpkin into cubes and boil in water for a few minutes until soft, then mash with egg, cream, sugar and cinnamon until you get that “fresh out of a can” pumpkin pie taste, and bake in a pie crust.

Sweet potatoes – commonly called camote or papa dulce – can require a bit of a search throughout most of Chile, despite their South American roots. If sweet potatoes are a must on your Thanksgiving table, your best bet is a large vegetable market like La Vega Central. And for sweetener, try the traditional Chilean chancaca, a raw, unrefined sugar crystallized with honey and flavored with orange peel – the secret ingredient of the popular drink mote con huesillos.