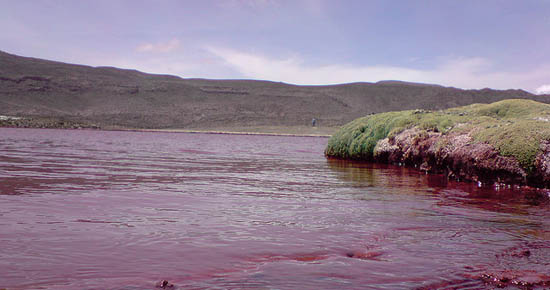 From warm-weather hikes around red lakes to relaxing in a hot spring — though it’s winter there are still plenty of great destinations in Chile.

Though winter may have struck Chile, the travel season is anything but cooling off.

According to statistics from the government’s tourism department (Sernatur), roughly one in five Chileans will take a winter vacation somewhere in the Andean nation, and their top destinations can be the best places to start for foreigners looking to join in on the winter fun.

This is Chile scoured a list of top winter destinations to bring you some new ideas of what not to miss among the places the locals want to see when the days get short.

Sernatur lists the northern cities of La Serena and Coquimbo as two of the most popular destinations and, with a look around in July, it is easy to see why. While La Serena’s beaches are a must-see in the summer, the area’s nightlife is still a winning choice even when it cools down. The neighboring cities also have a mild winter temperature hovering around 50 degrees Fahrenheit, making it an easy way to escape the chill down south.

But there are also a few less visited northern destinations on the list. The Tarapacá Region is home to one of the top choices — the Laguna Roja that sits more than 9,000 feet above sea level in the Andes. True to its name, the waters in this lake are an almost are an almost-eerie blood red, and it sits near two sister lakes that are yellow and blue.

The lake’s bright color comes from a mixture of algae and local sediments. Though off-limits to swimmers due to its hot temperature, the lake can be a stunning addition to any vacation photo roll.

It is accessible via the small town of Camiña, about 120 miles outside of Iquique.

Winter tourism in the area surrounding Santiago is all about skiing. The area boasts some of the Southern Hemisphere’s top resorts near the country’s largest city and busiest airport. With the high number of visitors and their close location, these are also some of the most easily accessible destinations on La Nación’s list.

While most have heard of the famed snow at the capital’s many ski resorts, including the notable Valle Nevado, get off the beaten path by heading a little bit outside the Metropolitan Region to Rancagua and give the Chapa Verde ski area a try. Located on land owned by the Chilean copper mining giant Codelco, this ski resort was originally built by miners for their own use. Now it is open to the public and offers almost 3,000 acres of terrain along with two restaurants and all the ski or snowboarding instruction needed to make for an enjoyable, powdery weekend.

Braving the south in the wintertime may not seem like an option for the cold-blooded, but that is exactly why La Nación’s list focuses on the region’s hot springs and soul-warming cuisine.

Be sure to check out Termas de Chillán, or the Chillán Hot Springs, for some of the hottest waters and warmest meals the south has to offer. With saunas, jacuzzis, massage rooms and spas with mud and water treatments, this can be the perfect place to relax and unwind.

The beautiful resort is also home to traditional Chilean fare like empanadas and pisco sours and some of the best pizzas and French food around.

It’s also a great destination for couples or groups looking for a compromise between being pampered and getting into the great outdoors  — the Chillán volcano boasts the longest ski run in Latin America. The almost-12-mile trail that winds in and out through the area’s beautiful native forests is among the most stunning ski experiences anywhere and almost always has the fresh snow to make it a day to remember. There is also plenty of terrain for backcountry skiing, hiking and even snowshoeing for those who prefer to get farther away from the lifts.

So whether you’re looking for an outdoor escape from the chilly weather or an August ski getaway — or maybe just some soothing hot springs to ease the stress — Chile has plenty to offer.