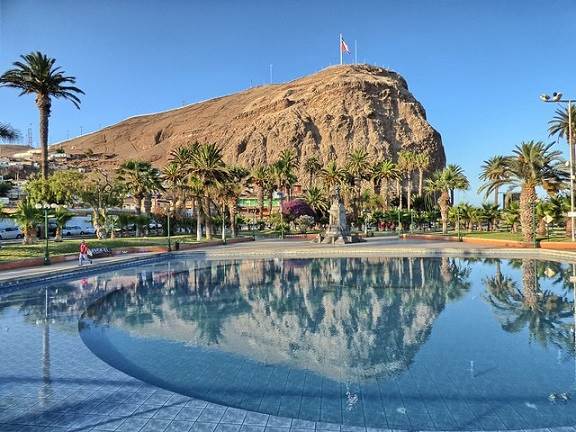 The main characteristic of Arica’s downtown is its narrow streets. Sometimes it is hard to believe the existence of so many old buildings and some new ones.

One of the most advisable places to visit is the “Edificio de Correos y Administración” (Post Office and Administration Building), the same as some colonial places such as Bolognesi and Sangra, the impressive Peru Consulate and the old market –unique because of its great stone skirting board and iron pillars.

The origin of the square is found in the epoch when San Marcos de Arica was founded, and despite the construction of some recent buildings, the initial location still remains.

Like every city founded by the Spanish, this square was the corner stone of social and commercial life in the city.

This is the reason why we can find emblematic places such as Catedral de San Marcos, the “Gobernación” (Department of the Interior) and other modern buildings.

Considered as national monument, it was built between 1871 and 1875 in Gustave Eiffel’s factory located in Paris. It was the initiative of the President of Peru –Jose Balta- and the idea was to place it in Ancon. It was assembled in Arica to replace the main church destroyed by the earthquake of 1868. The style was gothic in an era in which Europe was testing some new materials -such as cast iron- in some old art styles.

The structure is made of steel sheets and triangles placed between columns and girders of covers assembled with bolts. Only the door is made of wood.

This is the result of the treaty of Peace, Friendship and Commerce subscribed by the governments of Chile and Bolivia on October 20th, 1904. It was finally inaugurated on May 13th, 1913.

Its length is 457 kms between the port of Arica and La Paz, having almost half of it in Chilean territory.

In front of the building there is a German locomotive, built in 1924 that was used in this journey. Nowadays it only keeps cargo transport between these two cities.

This building was pre-built by Eiffel’s factory and assembled in the place over rock foundations. Considered national monument, the building was inaugurated in 1874.

It is a huge structure, with strips and horizontal cornice, where you can appreciate a big tympanum and a metallic canopy over the doorway. Once inside, there is a spiral staircase which leads to the second floor. Each brick has the name of the manufacturer stamped on the non-visible side.

This historic building has been recently renewed and nowadays it accommodates the Casa de la Cultura of Arica “Alfredo Raiteri Cortes which depends on the local municipality.

In Aduana Park there is a beautiful locomotive formerly used in the journey Arica-La Paz.

Located in the intersection of Arturo Prat and San Marcos streets, this is the third of Eiffel’s constructions in Arica.

This historic rock, that reminds us of the triumph of Chilean troops in the Pacific War on June 7th, 1880, belongs to the many hills of the Cordillera de la Costa. It is located in front of the sea and it is 110 m. High, offering a panoramic view of the ocean, port and city. On the top of this rock there is a museum and some monuments to remember the military heroic feat.

The fortress had the following terrestrial fences: the Fuerte Ciudadela to the East; the Fuerte Este a little to the south, where there is a pond; the Fuerte Morro Gordo, under the relay antenna; the Base Naval Morro Bajo in the current museum, with four big cannons and the gunpowder arsenal. In addition to this, there were several batteries in the plain where the broken cannons, a bust of Coronel Pedro Lagos and a monument to the Unknown Soldier.

The paradise for game lovers and the art of being lucky is a wide building with play rooms, bingo and machines. There is also a restaurant, a bar, a dance room and different shows.

Formerly separated from the continent by a 460 m. wide channel, it was an island for guano until 1967. Harpoons and hooks that belonged to the first inhabitants and sea people from the first and second centuries have been found there. Later, the Spanish built fortresses to defend against pirates like Drake, Sharp and Watling, attracted by gold and silver shipments coming from Potosi and destination Spain. After 1964 it was united to Arica. Nowadays it is a national monument.

Located on the top of the “morro” or rock, the car access is in Sotomayor street and people access is in Colon street. On the entrance there is a compass made in bronze. It shows costumes, weapons, books, newspapers, photographs and many objects used by both the Chilean and Peruvian Armies in that period. It is open every day from 8 AM to 8 PM.

It is the main access to the city coming from the north. The trip allows you to admire the coast of Arica in its plenitude and the wide beach Chinchorro, the one preferred by swimmers and surfers. On this beach there is a wide area of vegetation –the Centenario Park- with places to picnic and games. Next to the park there are tennis courts, a swimming pool and restaurants.

On the other hand, the South Coastal goes through the southern coast of the city to the “morro” of Arica. You can find the “Peninsula del Alacran” (Scorpion Peninsula), the Yatching Club and beaches such as El Laucho, La Lisera and Playa Brava. You can also find places for all ages, like discos, pubs, restaurants and games.

Commercial fair to the open air. It is located behind the Casino every Sunday. In this fair you can get both national and imported items.

It is open every day next to the Arica-Tacna railway station. Its characteristic is the sale of nutritious products, for personal use and handicrafts from neighboring countries.

Located in the street with the same name, this walk is characterized because of the several craftsmen offering a wide variety of products, from leather items to fine jewelry made in semiprecious stones.

Las Machas: located north of Chinchorro beach, it is not apt to swim because of its strong sea streams. It is used for fishing and for sport like surf.

Chinchorro: located 2 km. north of the city, with smooth waves, it is apt to swim, diving and nautical sports. It has a walking harbor. The place has a great future because a new district with 900 to 1,000 houses will be built. In the sandbanks of Chinchorro we can find the boilers of the North American ship called “Wateree”, dragged by the waves of 1877’s seaquake, that reached 19 m. high, taking the ship that had run aground in 1868 to the beach.

La Lisera: located 2.5 km. away from downtown, its shape is circular, semi closed, 150 m. long, no swell and it is apt for swimming and diving. It includes dressing room equipment, gardens, parking places, liquor stores and games for infants.

Playa Brava: only to sunbathe, there are tables and parasols in the area. In front of the beach you can find discos like El Adobe and Le Club for young people. Not far from there you can also find a place to dance “salsa”.

Corazones: located 15 km. south of Arica, you can get there following the coastal road. It has smooth swell and a calm sea, apt to sunbathe, picnic and fishing. Fine, dark-sanded beach, with astonishing cliffs. There is no regular transportation or drinking water. But there are sanitary facilities and liquor stores.