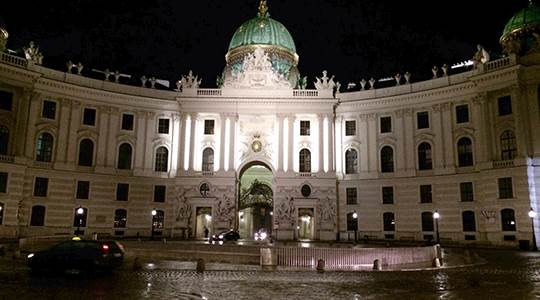 The city of culture, classical music and of course cake, Vienna is a jewel in Central Europe. It’s not hard to image the imperial Habsburg family calling it home, as the whole city looks like something straight out of a fairy tale. Each building, even if it was a just a basic shop front warranted a photo. I have culminated a list of some of the best things to do when visiting Vienna.

Home to some of the greatest composers that ever lived, a trip to Vienna would not be complete without catching a concert. The Vienna State Opera (staatsoper) holds regular operas and performances with music from Mozart, Strauss and the like. It doesn’t have to mean astronomical prices either – standing tickets from as little as €13 are available. To blend in with the opera-going locals pack a smart outfit, it is not compulsory, but we found there was a difference between the tourists and the locals in their choice of clothing!

It won’t be hard to find a traditional Wiener Schnitzel in Vienna. Veal, fried in breadcrumbs served with a lemon garnish and a potato salad is often on many a menu. One of the best places we went to was Plachutta: Gasthaus zur Oper, located near to the Staatsoper serving a huge and tasty portion of this traditional delicacy. Many restaurants in Vienna are open late, catering to the post opera crowd so do not be afraid of eating at 10 or 11 at night!

On a sunny day in Vienna you should take a stroll through Stadtpark and say hello to the statues of some of Vienna’s musical and artistic greats. Discover the gold gilt statue of Strauss and monuments to Franz Schbert and Robert Stolz. You can also marvel at the opulent Kursalon, which holds a number of classical concerts.

Open six days a week, the bustling naschmarkt is worth a visit. The first half is packed with vendors selling a delicious array of treats, from huge wheels of Austrian cheese to marzipan fruit and straight-out-of-the-oven pretzels. Further down, visitors will stumble across the flea market side, where locals haggle for unique antiques. Once you have grabbed yourself a bargain or two, you can enjoy a glass of Austrian wine in one of the many restaurants situated on the fringes of the market. A perfect place to people watch, the menus often serve fresh food from the market itself.

There are so many cafés in Vienna, with slices and slices of deliciously tempting patisserie. Sample a “sachertorte” a traditional Viennese chocolate cake invented for Prince Wenzel von Metternich and wash it down with a glass of sparkling wine, straight from the vineyards that surround the edges of the city. My favourite café was Gerstner. Head up the sweeping staircase and choose to sit in velvet seats near the sparkling wine bar or alongside the piano. Another recommendation would be Café Central. Located near the Hofburg Palace, it was a meeting point for the Viennese intellectual scene during the 19th century. Freud, Leon Trotsky and Lenin all have been patrons.

Vienna is home to the famous Spanish Riding School, where the snowy white Lipzannen stallions perform under the guidelines of classical horsemanship. Visitors can watch a traditional performance on Sundays where the horses and their riders show their experience of four centuries in dressage.

Afterwards take a look around the Hofburg Imperial Palace and museum to “Sisi”, the tragic Empress Elisabeth of Vienna. Here you can take a step back in time to the imperial apartments and imagine yourself living the life of the Habsburg dynasty.

Vienna is not a particular big city so it is easy to wander around and explore. Keep an eye out when you cross the road especially the green and red traffic icons! You never know what you will stumble across. Vienna has a big art scene so you may come across street art, which is a contrast to the opulent architecture of the Habsburg collection of buildings.