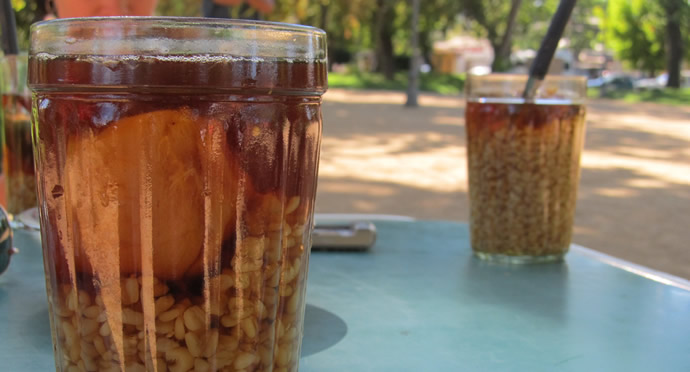 Some of them can be found in every corner of the country, while others you have to make at home, but they all serve the same purpose: to help put up with the hot days of Chilean summer.

The high temperatures many Chilean cities have to endure during summer are the perfect excuse for enjoying different beverages that have become part of the country’s tradition. We present you now the most popular ones.

Mote con huesillo: It is the ultimate summer drink, and can be found in carts in almost every corner throughout the country, where is sold in different sizes. It is a preparation of huesillo or dehydrated peaches, caramelized juice made with sugar or Chancaca, and cooked wheat mote (grains). All these ingredients, when mixed, create this famous beverage, halfway through between a drink and a dessert. It is so popular that in January 2008, the biggest one in history was prepared in Osorno, in southern Chile. It consisted of more than 500 litres of this drink that had 60 kg of mote and 65 kg of huesillo.

Melón con vino: Another summer classic in Chile is the Melón con vino (honeydew melon with wine). It is more of an artisanal drink that hasn’t been commercialized massively and, as its name suggests, it is wine served inside a honeydew melon. In order to prepare this drink it is necessary to make a hole on the top of the melon and take all the pulp out, which is afterwards mixed with sugar and white wine. This sweet mix is poured inside the fruit, and there you go. It has become so popular that it has its own national day on January 15th.

Terremoto: It is said to be one of the most illustrious drinks of Chile during the National Holidays, but the Terremoto (Earthquake) can be enjoyed at anytime of the year. Its combination of Pipeño wine and pineapple ice cream is perfect for refreshing the hot summer days. The most traditional place to enjoy this drink is La Piojera restaurant, which greatly encompasses what being Chilean means.

Malta con huevo: Maybe Malta con Huevo (a type of non-alcoholic beer with eggs) is not as popular as the other drinks in this list, but it has its reputation as an energy drink for children and pregnant women for its high concentrations of phosphorus, calcium, and magnesium. It is also famous as a homemade hangover remedy. The malta, like beer, has barley as its main ingredient, but the process it goes through is different. Preparing Malta con Huevo is simple: mix the malta with the egg and sugar to taste, and it’s done. Better if served cold and with some powdered cinnamon on top.