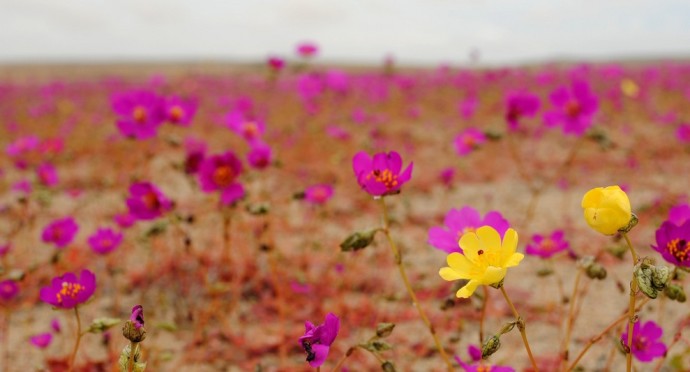 Every certain amount of years the driest desert in the world dresses in colors; creating a very unique phenomenon, the flowering desert.

The Atacama desert, in the north of Chile between Arica and La Serena, hides one the most impressive yet brief natural phenomena. Can you imagine the driest desert on earth covered in flowers? This is how the «Flowering Desert« phenomenon shows itself every certain number of years.

This spectacle of nature mainly occurs in those years where rain falls over places that are not used to water, as it is the case of the desert. Frontal systems that are present during winter, provoke the blossoming of the dessert and transform it into a colorful picture that generally appears during the months of August or September.

Experts agree that the heavy rainfalls that took place in Antofagasta during May, added to the forthcoming frontal systems, are creating the perfect conditions for this phenomenon to occur in all of its majesty, attracting and impressing tourists and local people. The last “Flowering Desert” took place in 2015. The cold temperatures that this winter is bringing could just delay the event but in any case should stop it.

This gigantic garden has became a unique tourist destination, that is why a number of travel agencies arrange tours and trips to watch this events in different part of the Chilean north. For this year, 2017, the area of La Chimba and its ravines, in Antofagasta, has been identified as the main focal point of blossoming for lilacs and yellow iris; besides the classic tour of Valle del Huasco and its surroundings; where more than 200 species of flowers can be seen.

El Niño phenomenon pushes up north the Pacific anticyclone, which is in a way the creator of the desert’s weather, and activate with its rain those seeds that were in long periods of latency.

Not all the species of flowers germinate at the same time, and usually they do according to the place where the seeds are. Generally, the first to appear are buls such as red and yellow “añañucas” and also white “glory-of-the-sun”. After that, other seed flowers appear; such as the “pata de guanaco” with its recognizable pink color that covers a big part of the desert.

Not only flowers are the ones creating this ecosystem, which is under protection; along with the blooming of different species of flowers, there is also a huge variety of reptiles, insects, mammals, birds and rodents that are attracted to this spectacle that takes places in the north of our country.