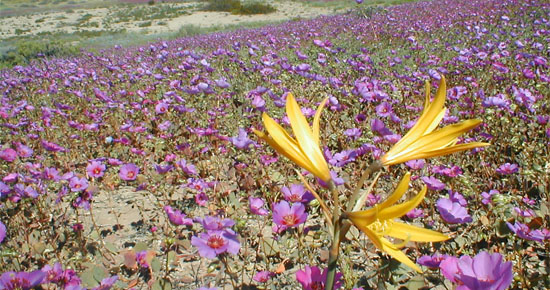 Can a desert become a flowery garden in a matter of just a few hours? It can in Chile. It is a climate-related  phenomenon called the Desert in Bloom (Desierto Florido), which takes place in the driest place on earth, the Atacama Desert, in the northern part of the country.

This natural wonder happens occasionally, in years with higher than normal precipitation, mainly between July and August. But the results can be seen a few months later, between September and November, when there is a mass flowering of native species that color the dry sands with intense tones of purple, green and yellow.

Though as such the Desert in Bloom has not taken place since 2008, last year it happened on a smaller scale in Coquimbo Region, where thousands of tourists took advantage of the occasion to take photographs. This 2010 the natural spectacle is expected to come earlier, thanks to the unusual and frequent rains of May. In fact, according to the National Forestry Corporation (Conaf), the first shoots can already be seen in Huasco Province, southern Atacama Region, in July.

This immense garden has become a unique tourist destination in the world, which is why numerous agencies have programmed trips to observe this phenomenon from different parts of northern Chile, such as Vallenar, Copiapo, Caldera and La Serena.

Over 200 types of flower embellish the arid Atacama landscape, where lilies, suspiros, añañucas, goat’s horns and lions’ claws stand out. The trails can be visited from places like Caleta de Hornos, Juan Soldado, Quebrada Honda, or on the El Temblador beach near La Serena, or else in Totoral Bajo, Carrizal Bajo, Huasco and Caleta Barco near Vallenar.

You can also see a variety of birds, insects and other animals like lizards, the tamarugal tucotuco (a small rodent) and the four-eyed toad. This biodiversity in such an inhospitable place came to the attention of the French naturalist Claude Gay, who traveled to Atacama in 1831 to observe and study this rare phenomenon. But when he arrived he was unable to find anything more than cacti and rocks, as the country was going through a drought at the time and the desert did not flower. The scientist had to wait until 1840, when the phenomenon presented itself again in all its majesty.

To make the best of this trip across the Atacama Desert, it is recommended that you visit the Los Flamencos National Reserve, located 104 km from Calama, where you can also see part of the desert in bloom. In addition, the place stands out for its attractive fauna like the Andean condor, the vizcacha, the culpeo fox, and the vicuña.

In this area the Tara and Aguas Calientes salt flats stand out, as do the Miscanti and Miñigues lagoons and the Valle de la Luna (Valley of the Moon), tourist attractions that are must-sees. It is also very captivating to admire the wild flora while walking along the trail in this reserve. The most popular of these include La Luna trail , Valle de la Luna, and the Tara salt flat.

What can you do in these places? The activities that tourists engage in the most in this area are photography, trekking, and observing the wildlife. The only restrictions are on the use of motorized vehicles and bicycles to preserve this wonderful phenomenon.