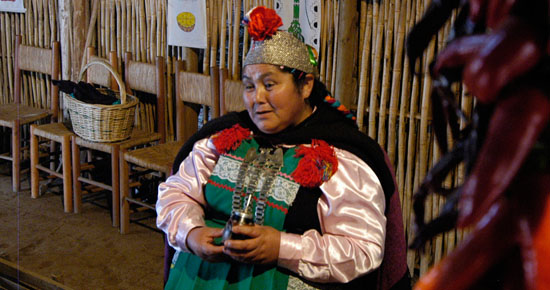 Colds, depression are some of the ailments that can be treated with the traditional cures of the Mapuches. These are accessible through Makelawen, the first chain of pharmacies specializing in these ancient techniques.

According to the tradition of the Mapuches, an indigenous people from the south of Chile, a machi (spiritual leader with healing powers) is capable of detecting cancer by just looking at the urine sample of a person. This ancestral wisdom, together with the knowledge that the main Chilean ethnic group possesses regarding plants and herbs with curative properties, have not only allowed this type of medicine to flourish both in Chile and abroad, but has also led to the successful creation of the first chain of Mapuche pharmacies: Makelawen.

The history of this business dates back to 10 years ago, as a result of another innovative project: the incorporation of Mapuche medicine at the Makewe Hospital located in Temuco, region of Araucanía. Although the initial idea was for the population to become better acquainted with Mapuche healing practices, because the hospital had a limited geographic scope the initiative of selling the products through a pharmacy arose.

After starting off with a pharmacy in Temuco and a few medications, today the firm has five pharmacies in Santiago, Valparaíso and Concepción; it invoices close to US$ 900,000 per year and has broadened its catalogue to 54 products. These are all marketed in the form of sublingual drops and are made of extracts of medicinal plants diluted in alcohol and water, with no chemicals added.

The company has also received several awards from Chilean public and private organizations. The “Silver Toqui” (Mapuche chief), a prize that is awarded by the National Corporation for Indigenous Development (Conadi) together with the Ministry of the Economy, and the 2007 City Prize awarded by the Fundación Futuro, have been some of the acknowledgements it has received in honor of its entrepreneurship and the promotion of the quality of life of Chileans, respectively.

Makelawen has expanded to such a point that in 2009 it launched a line of cosmetics specially made to improve the quality of women’s skin using 100% natural products.

Creams, oils and lotions with extracts of rose hip, quinoa, hazelnut oil, quillay and traditional Mapuche medicinal herbs are some of the products that seek to revolutionize the current natural cosmetics industry in Chile. They are all marketed in luxury jars made in Italy and labeled with a bilingual description of their organic components anticipating their eventual export potential.

“Although we don’t have specific plans to export our products, some time ago traders from Korea conducted an eight-month follow-up of the pharmacy because they are interested in buying medications”, says Ema Acevedo, a pharmaceutical chemist working at Makelawen. “They have, though, made the requirement that our products be made by Mapuches and within the region of Araucanía”, she adds.

The catalogue of Makelawen products now encompasses 54 products. Some of the most sought-after medications are: