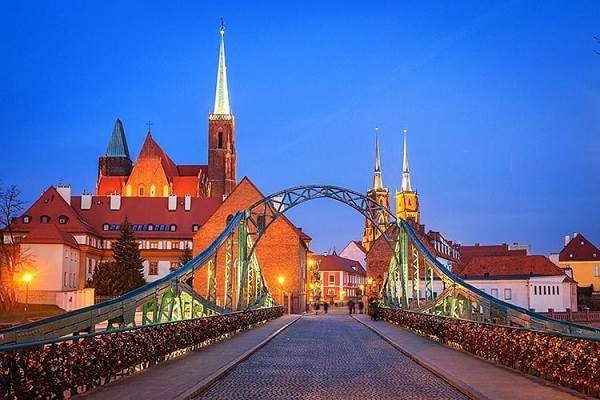 Is this one of the prettiest towns in Poland? We sure think so. And one of the hardest to pronounce? Most definitely. Welcome to Wroclaw! (“wrohtz-wahv”). This charming city in Western Poland has an abundance of history and culture, unique architecture and vibrant colourful buildings lining the streets. Krakow and Warsaw are undoubtedly the most popular destinations for tourists in Poland, and both are undeniably fantastic in their own ways, but we think it’s about time somewhere else got the spotlight. That’s why Tucan Travel has recently added the beautiful city of Wroclaw to all Poland itineraries from 2020. We have compiled some of the best things to do in Wroclaw below.

Cobbles paths, colourful buildings and that quintessential old school European charm, the heart of Wroclaw is its beautiful square. Most of the city was destroyed during World War II, so it was almost entirely rebuilt after 1945. Lined with restaurants and coffee shops, it’s a lovely place to sit and watch the world go by. What’s even more impressive are the gas street lamps that line the square – each one is still lit by hand each night. Watching this happen is a truly magical moment, transporting you back in time.

A replica of the stone pillory has been built to the south east end of the Town Hall, where you can see what used to flog members of the public from the start of the 14th century well into the 18th century. Another notable sight in the square is the bronze bear statue, located at the southern side of the Town Hall.This slightly bizarre statue shows a bear stood on a tree stump while sticking its tongue out. Originally a fountain created in 1902, the original was lost during the war and a replica was created in 1998. It’s considered good luck to rub the bears nose or tongue!

Cathedral Island is something straight out of a fairytale, adorned with churches, bridges and charming sights around every corner. Known locally as Ostrow Tumski, it’s the oldest part of the city and dates back to the 11th century when a Slavic tribe built their settlement here. During that time, Ostrow Tumski was in fact an island with the River Odra snaking around the land. King Boleslaw the Brave established a bishopric here and decided to build a cathedral – and Cathedral Island was born.  It was in 1810 when a section of the river was filled in and built upon that the island became part of the mainland of Wroclaw.

To this day it remains one of the most sacred and important parts of the city. See some fantastic Gothic and Baroque architecture as you set your eyes upon the Cathedral of John Baptist, the Church of the Holy Cross, the Church of St Giles and a 19th century Botanical Garden. You’ll also find some lovely little restaurants and cafes hidden throughout the streets.

Hidden beneath the colour and beauty of the city is a whole population of cheeky gnomes waiting to be discovered. Over 400 of them are peppered throughout the city, hidden in alleys and peeking out from behind lamp posts. These statues do have a deeper meaning behind them, and are a symbol of Poland’s strength and resistance.

They are an ode to the Orange Alternative, a movement that rose against Soviet occupation and fought to end oppression in Poland from the communist regime in the 1980’s. The government had censored free speech during this time and the movement saw protesters deface communist propaganda with humorous art such as mischievous gnomes, which became the most popular symbol of the movement. It was the people’s way of highlighting how absurd the laws were, and it soon resulted in marches for “gnomes rights’ . The largest took place on 1st June 1988 when 10,000 people took to the streets wearing orange hats and chanting freedom for the dwarves.

It wasn’t until 2001 that the city decided to commemorate this monumental movement. This was done with a sculpture of a gnome on the street that the protesters used to gather. Soon enough, a local artist had the idea of placing hundreds of small gnomes around the city. This would forever honour the courage of Wroclaw. Keep an eye out during your walks, or if you want to be certain you see some you can pick up a map from the tourist office that highlights the most central 30 gnomes. Happy hunting!

Sit down for some delicious local food

Polish food is some of the most warming and hearty cuisine in Europe. So of course Wroclaw has a great variety of restaurants to suit all budgets. You could pick up an inexpensive Polish sausage at the market food stalls, or enjoy a sit down meal at Pierogarnia Stary Młyn, a restaurant famous for its pierogi. Another popular choice for eating in Poland in general is milk bars, and Wroclaw has its share of a few. Milk bars are government subsidised restaurants which resemble canteens and have been around since communist times. They remain the cheapest way to get a hearty local meal and are all part of the Polish experience.

Take a stroll in the park

Wroclaw has a beautiful Japanese Garden that was created in 1913 for the World Artistic Gardening Exhibition. Complete with a large pond housing large carps, various Japanese plants and even a bridge and tea pavilion, the park is a peaceful and picturesque experience out of the city. The gardens are open from April to October and cost 8zl entrance.

The Hydropolis is a centre of environmental education, and is considered one of the biggest and best in Europe. The facility is located in a 19th century underground water tank, covering an area of 4,000 meters squared and it uses interactive installations and various multimedia technology to showcase everything there is to know about water. While this may not be characteristically Polish, if you’re in Wroclaw and find yourself with some spare time it’s a fantastic place to visit.

Speaking of water, enjoy a show at the Multimedia Fountain

The Wroclaw Multimedia Fountain is the biggest water feature in Poland and considered one of the most impressive in Europe. It was created in 2009 to celebrate the 20th anniversary of the first free elections in Poland after the war. Complete with a surface area of 1 hectare, over 800 lights and 300 jets, it showcases some spectacular shows. The jets simultaneously create surges of water in all shapes and sizes, various colours bounce of the water and music is played in the background, with anything from modern to classical. To top it off, animations and images are projected onto the water, depicting anything from important political events to sports. It normally takes place every hour, everyday, so if you’re in Wroclaw get down to the Szczytnicki Park to catch a show.

Kayak along the river for a different perspective

Wroclaw is famous for its bridges, so a wonderful way to spend a few hours on a sunny day is to rent a kayak and cruise down the Oder River. If kayaking isn’t for you, just book onto one of the many catamarans that sail down the water daily and enjoy seeing the city from different viewpoints.