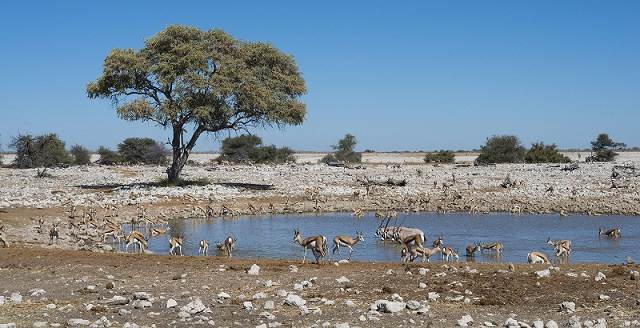 When considering the prospect of delving deep into the wilderness of a country on a quest to find some of the often fantastical creatures that roam its plains, climb its trees or swim its waters, only one location typically comes to mind – Africa. However, despite its abundant and marvellous wildlife, much of the continent remains relatively untouched by tourism. Few have walked with black rhinos in Zimbabwe, floated alongside hippos in Botswana or come face to face with the world’s fastest land animal in the Namibian grasslands. Africa’s southern reaches provide the perfect location for those looking to step off the beaten path and head into a land of untamed beauty where jungles, deserts and labyrinthian waterways await. Here is our list of the best safaris in Southern Africa.

Measuring a colossal 22,270km2 in total, it can be difficult to know where to start when exploring Namibia’s largest National Park. Etosha is home to sprawling grass plains, shaded mopane groves and a vast salt pan that reaches beyond the horizon. Each element of the park offers the prospect of spotting lions, rhinos or cheetahs thriving in their natural habitat. Inside the park, visitors can also spot herds of white elephants strolling the varied terrain like shifting marble statues.

The elephants, which adopt their pale hues thanks to the light clay with which they coat themselves, are rarely seen elsewhere. Given its gigantic scale and varied wildlife, a safari in Etosha National Park often proves to be an all-encompassing experience for those that enter through its gates, whilst the impressive salt basin lying at the park’s core boasts surreal scenery that is truly otherworldly in its appearance. Definitely one of the best safaris in southern Africa!

Hugging the southern banks of Botswana’s Chobe River is the nation’s eponymous national park. A variety of animals flock here in search of a refreshing drink or cooling bathe during the searing heat of daytime. Famed for its large elephant and hippo populations, Chobe offers unmatched opportunities to observe these species living in unison as they graze amongst the reeds along the water’s edge. Boat cruises down the river present the chance to get even closer to the local wildlife.

On the banks of the Chobe River are meandering dirt tracks that lead you deep into the jungle thicket. This is where lions, leopards and giraffes wander the landscape. The diversity means that cruising down the river can prove entirely different to a game drive on land.

Possibly the most famous safari spot in Southern Africa, Kruger National Park is an experience unlike any other. It’s renowned for its greater prospects of spotting Africa’s Big Five – lion, leopard, rhino, elephant and buffalo. The park is a medley of beautiful mountains, winding rivers, thick jungle and golden savanna. The natural splendour of the park’s scenery alone would be sure to draw flocks of tourists through its gates. Its scale is mind boggling – the park itself is a similar size to Israel.

Kruger National Park is a symbol of South Africa’s incredible wildlife. A game reserve that can absorb an explorer and capture their imagination, whether it’s their first safari or their hundredth.

Another of the best safaris in Southern Africa is Matobo National Park. Zimbabwe’s Matobo National Park is deemed one of the best places on the planet in which to spot wild rhinos. Thousands of years of glacial erosion has gifted Matobo with an array of intriguing rock features. These appear impossibly balanced upon one another above the green grass and sporadic shrubbery below. The boulder-strewn scenery provides a dramatic environment through which its varied creatures roam. This creates images of unimaginable beauty for all who visit. Perhaps the most famous landmark is the grave of Cecil Rhodes, former Prime Minister of the Cape Colony. Despite the often controversial viewpoints of Rhodes, the site is well worth a visit for the views that earned it the name “World’s View”.

A meandering network of waterways that merge and diverge within the confines of a surrounding swampland, the Okavango Delta lies in the wild heart of Botswana. Inaccessible via roads, the delta must be explored in traditional mokoros. These are lightweight canoes manned by a poler who guides the vessel between a maze of towering papyrus reeds that obscure the delta’s skyline. Slowly drifting between the narrow corridors of reeds at water level with the prospect of hippos, buffalos and crocodiles lurking nearby gives passengers a sense of untamed excitement and immersion into the landscape. Walking safaris are also popular in this region. Travellers can roam the same land as the colossal mammals and deadly predators that rule it.