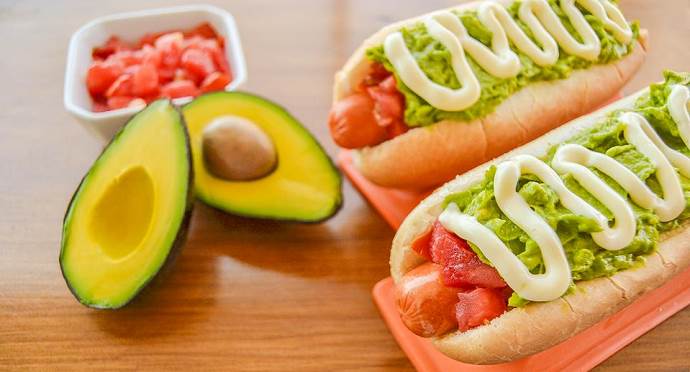 Adapted from the American hot dogs, the «completos» have become an important part of the chilean cuisine.

During the month of May several fast food chains celebrate one of the most delicious gastronomic traditions of Chile, the «completo». From the well-known completos such as the «clasico» and the «italiano», to more gourmet variations, the recipe has adapted in order to appeal everyone’s palate. Here we have selected a list of different places where you can enjoy a “completo” all year long.

Portal Fernández Concha
One of the most classic places in Santiago where you can enjoy a «completo», it even has the reputation of its creation, as an adaptation of the famous American hot dog in 1920. With different premises and good prices, the «paseo de los completos» has known how to keep its success through the years and still be one of the best options to grab something quick to eat if you are walking around Plaza de Armas.

Dominó
With different branches in several cities of the country, Dominó has become one of the most famous places where you can enjoy a «completo». With a wide variety of options and its homemade mayonnaise, it has succeeded in captivating its guests. It has also taken advantage of different national events, creating special editions during political elections and football championships.

Fuente Alemana
One of the most visited places to eat a «completo», known for the good quality of its sausage and its ingredients, specially the sauerkraut and mayonnaise. Fuente Alemana is a safe option if you want to enjoy this tradition, but at the same time it surprises because it does not offer ketchup but instead, a tasty tomate sauce.

Shoperia Oriente
Located in the city of La Serena, this place has kept the same recipe for over 50 years. Those who visit it say that what makes this place so special is their homemade mayonnaise and its bread, always crunchy and at a perfect temperature.

Sibaritico
One of the most popular places to grab something to eat in Viña del Mar, it’s known for the size of its sandwich at a fair price, specially the «completo», being completely necessary to use both hands in order to eat it. They have also known how to make the most of the city’s nightlife, opening its door until early in the morning.

Completos Llanquihue
One of the best-known places to eat a «completo» in the city of Concepcion. Its most famous variation is the one that carries the same name as the store. Despite of the simplicity of its recipe (bread, homemade sausage, plenty of chucrut and mayonnaise), it has become very popular among its inhabitants

Hogs
The «gourmet» option for those who want to enjoy this national tradition. Among its options it is possible to find different types of meat for its sausages, going from the classic ones such as pig, beef and turkey, to more special options such as lamb, deer and wagyu.

Vegan Bunker
The vegan option for those who don’t want to stop enjoying despite of their preferences. The Vegan Bunker offers the option of a soy sausage, accompanied with tomato and homemade mayonnaise, providing the option of adding avocado.