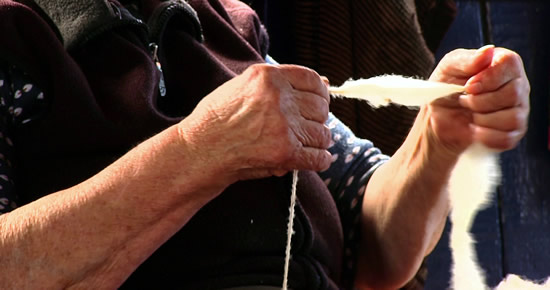 Chiloé islanders have lived for centuries making woolen clothes to keep themselves warm during the long winter months. Though new techniques have come to the island over the years, 78-year-old Otilia Bahamondes, who has been weaving all her life, chose to stick with the methods she knew.

After a heartwarming bowl of caldillo in the local market at Dalcahue, on the east coast of Chiloé, one of the aproned ladies serving us mentions an old weaver she knows. 78 year-old Otilia Bahamondes, the lady says, is more than just a skilled weaver; she is a master of the craft, known locally as one of the oldest and most established artesans around.

Otilia is far from alone. She is one of many arañas (spiders) – as they are locally known – hidden away in the many huts and shelters of the island, spinning and weaving their webs in the beautiful, natural brown and black wools of Chiloé’s sheep.

A short hitch up the road to a statue of the Virgin Mary, and then another longer journey along a winding road through the green countryside takes us to Puchauran, where we ask after Otilia’s house. We eventually find the old lady hunched over a loom in a wooden hut surrounded by sheep and chickens.

Otilia’s hands move brusquely over layers of thread which are splayed out over two wooden sleepers on the floor. She has already shorn the wool, combed, washed and dried it, spun it by hand into thread and fed it onto the loom. Now she has arrived at the weaving stage; it will take her 4 days to complete a shawl before sending it off to the market at Dalcahue for a stock price of around CP 9,000 (US$ 18).

The words and language she uses to describe the working parts of her loom are remnants from Chiloe’s distant past, forgotten and unused by users of more modern pedal looms. Many of the names have the distinctive ‘hue’ ending that indicates Mapuche origin.

Ñirehue: a cane above the threads that splits the threads apart, giving the fabric the distinctive criss-cross pattern that makes Chilote wool shawls waterproof.

Paranpahue: a knife-shaped wooden baton used to prize apart the two levels of  threading before ramming the new thread against the already woven fabric.

Chamhes: V-shaped posts on which the entire piece of fabric spools.

“Nobody now would use those words any more,” Otilia tells us. “That’s the olden way of saying it.”

As her hands work back and forth she speaks about the days of her childhood on the island, before the road we arrived by existed. “It was just like this – in the same hut, with the same tools.” Over the many years, the constant friction of the woolen threads on the hardwood of the paranpahue has left the blade serrated and worn. “The threads make it like that,” says Otilia. “It was like that when I was given it. My mother used it before me, and her mother gave it to her.”

Then, aged 14, while learning to weave over her mother’s shoulder, she would have to walk 8 hours through the fields to sell her family’s goods at Dalcahue market, with kilos of wool balanced on her head. “It’s better now,” Otilia says. “My brother and children live in the houses around us and if I want to go to Dalcahue I can take a bus.”

Despite the easier access to the village market and the tourists who might choose to visit, Otilia has patiently maintained her slower style of work, the same practiced by her predecessors for generations. “For no particular reason,” she says, “I just prefer working like this.”